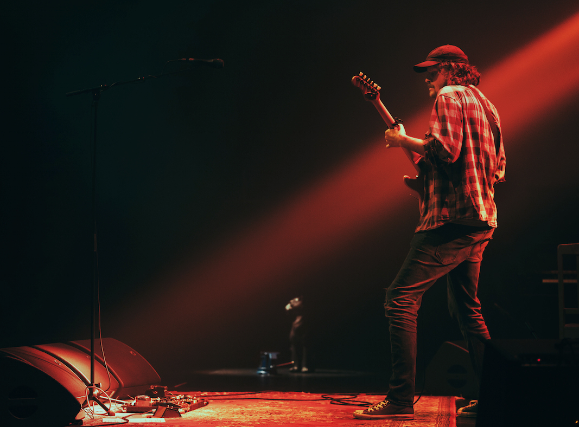 Lord knows I’ve reached my quota of earnest white-guy folkies but Daniel Norgren is different; he’s transcendent. His music is Americana soul as envisioned by a reclusive, rural Swede. Or the inverse—a grand, universal sound arrived at through a very specific place and state of mind. Over the last eight or so years, Norgren has released a bunch of recordings on his own Superpuma Records label, but his true magnitude arises from his performances. The physicality, the vibration of his songs is as integral as their ambling simplicity.

Jenn Champion’s latest record, Single Rider, shimmers and shimmies in the vein of synth-driven ’80s pop a la Flock of Seagulls or Toto, with Champion’s soft, assertive voice at the center. Despite its band-like dynamics, the whole thing was recorded almost entirely by Champion herself. (Her sole conspirator on the record, Brian Fennell, is late of Seattle pop-rock band Barcelona and more lately an electro-pop hitmaker himself under the name SYML; his “Where’s My Love” has racked 11M YouTube views.) Live, she plays with a pair of bassist/keyboardists, an unorthodox setup that caters to Champion’s auteuristic tendencies and fosters interplay.

You’d have to be a fun-hating, music-spurning monster to miss Sub Pop’s free series of 30th anniversary events this weekend. You’re not, so get yourself to the Mural Amphitheatre on Friday evening for the Afghan Whigs and/or to Alki Beach on Saturday for a sunny, beer-gardeny, all-day celebration with Shabazz Palaces, Mudhoney, Wolf Parade, Kyle Craft, Beach House, several more musical bands and “Special Guests”—plus a zillion of your closest friends, all high on rock ’n’ roll.

Arguably the best-known American opera, Gershwin’s Porgy and Bess is the only one that mandates that nearly the entire cast be African American. You’ll know the tunes, songs like “Summertime,” “I Got Plenty o’ Nuttin’” and “I Loves You, Porgy,” both in the original and in versions by stellar artists like Ella Fitzgerald and Louis Armstrong. Bear in mind that not all of this 1935 material has aged particularly well, but expect the singers to shine. Seattle Opera last performed it in 2011.

In a year that’s turned out to be sadly short on poignant rock ’n’ roll, Freedom, the fourth album by New York-based Amen Dunes, is something of a revelation. Over lush, melancholy, triumphant arrangements, bandleader/songwriter Damon McMahon’s throaty warble pushes poetic narratives that may or may not be autobiographical. These songs are his attempt at the universal via the precisely personal, and in their earnest urgency and self-knowing gravitas they feel especially attuned to a moment that could use both an undiscriminating embrace and a strong sense of moral direction.

This group of singers, who can master the most difficult and harmonically unusual music, celebrate the life and work of American composer Leonard Bernstein on what would have been his 100th birthday. The repertoire includes a performance of all his sacred vocal and choral compositions in English, Latin, French and Hebrew, including his Chichester Psalms and excerpts from his Mass. St. James Cathedral organist Joseph Adam joins. Showing his more serious side, this concert shines a different light on Bernstein than his popular, jazzy, upbeat, West Side Story-style music.