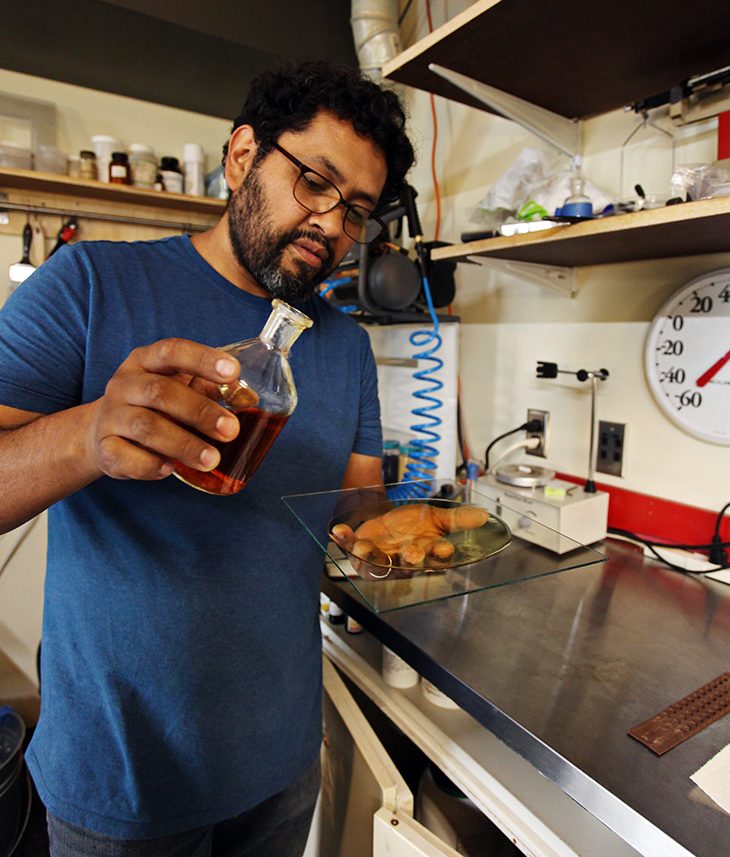 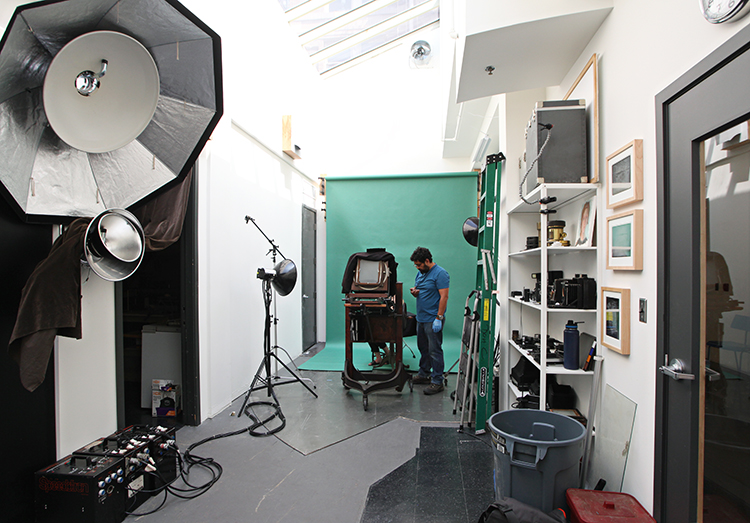 In a light-washed studio in Pioneer Square’s historic Good Arts Building, home to ’57 Biscayne art studios, Daniel Carrillo and studio-mate Dan Hawkins experiment with very vintage photography techniques. Forget instant film and mid-century Brownies: Carrillo’s large-format cameras are assembled from parts that date back to the late 1800s, such as ornate wood stands that resemble something out of steampunk fantasy. The newest component of the studio’s current setup is a massive lens from the 1960s.

Carrillo’s medium of choice is collodion process wet plate photography. This revolutionary process was invented around 1850 and combined a prep, exposure and process time of around 15 minutes from start to finish. By 1860 the collodion process had all but replaced the more arduous daguerreotype of preceding decades. Today, collodion is still used by a few artists because the images it produces are uniquely ethereal in quality: Figures and objects emerge, floating almost otherworldly across the surface of the lustrous, silver-glass pane. There’s nothing quite like it. 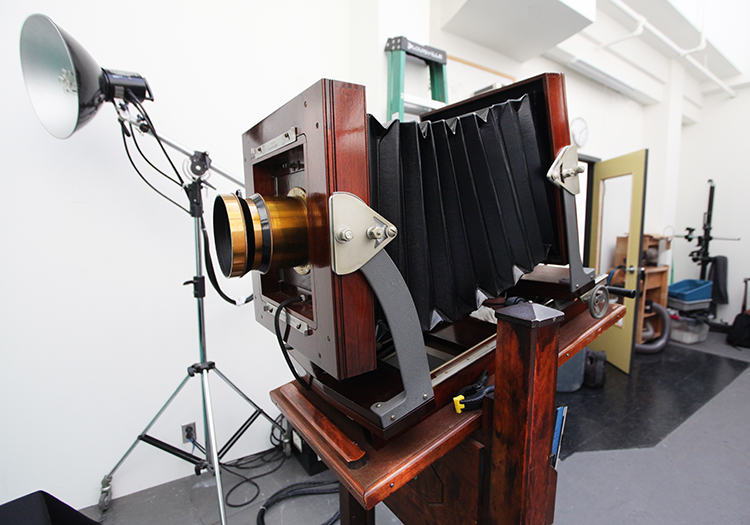 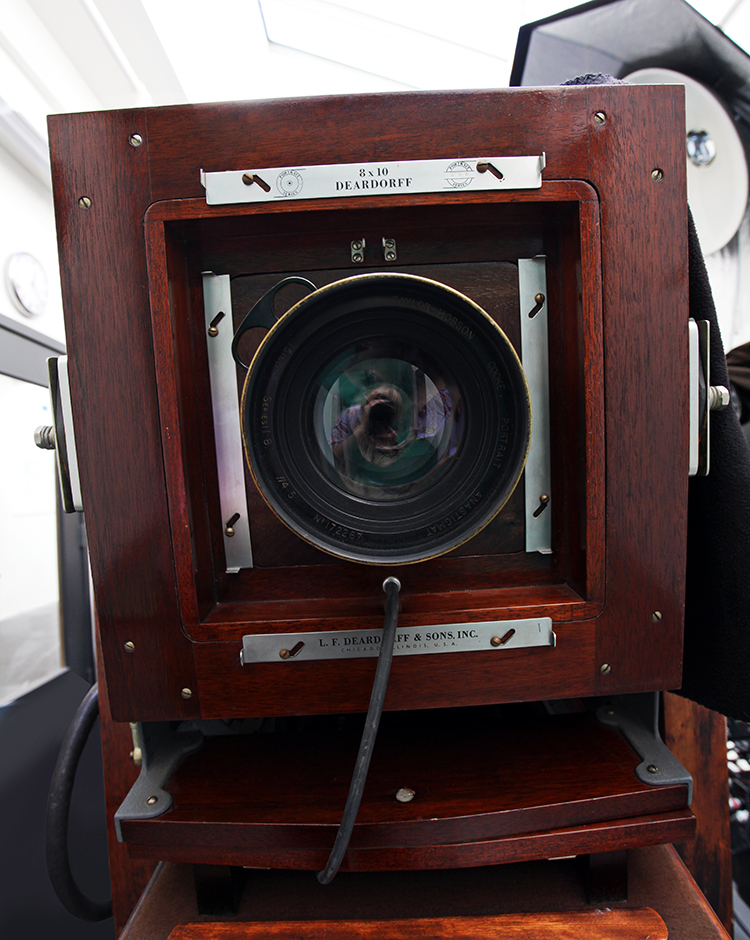 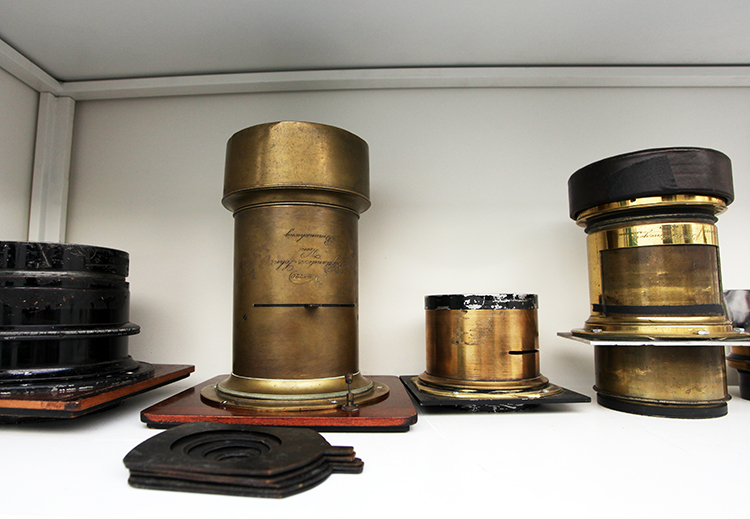 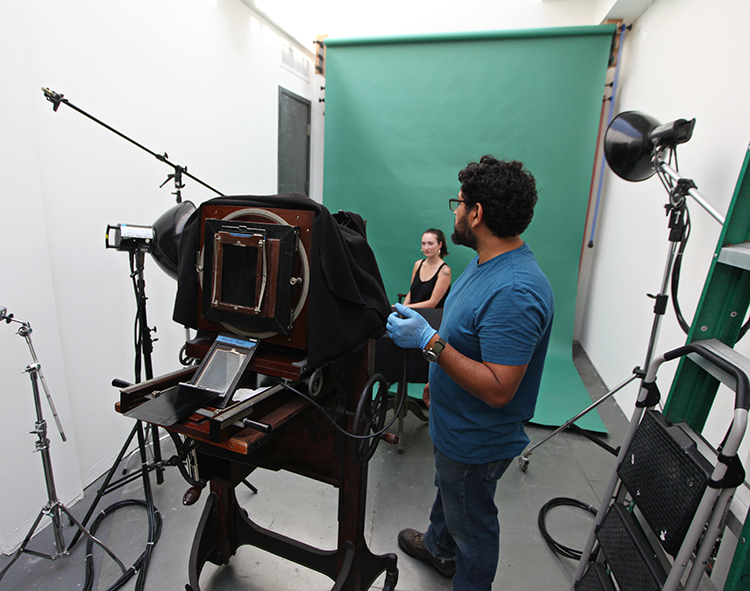 Exposures using Carrillo’s setup take up to 15 seconds. Subjects are seated on one of the studio’s many antique chairs, necks secured in the grip of a metal brace to hold them still throughout the exposure.

“I prefer glass to tintype as a material,” Carrillo says. “I like the quality of the transparency. You can also pull prints from the glass later if you develop it right, using the print as a negative. You can’t do that with a tintype.” 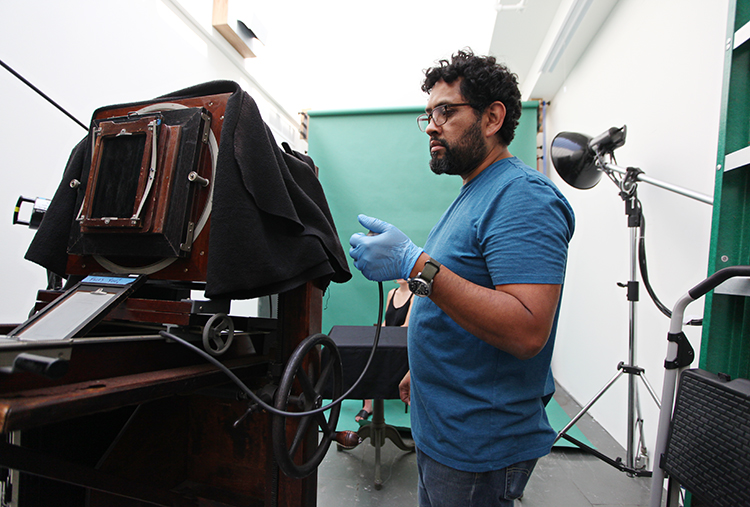 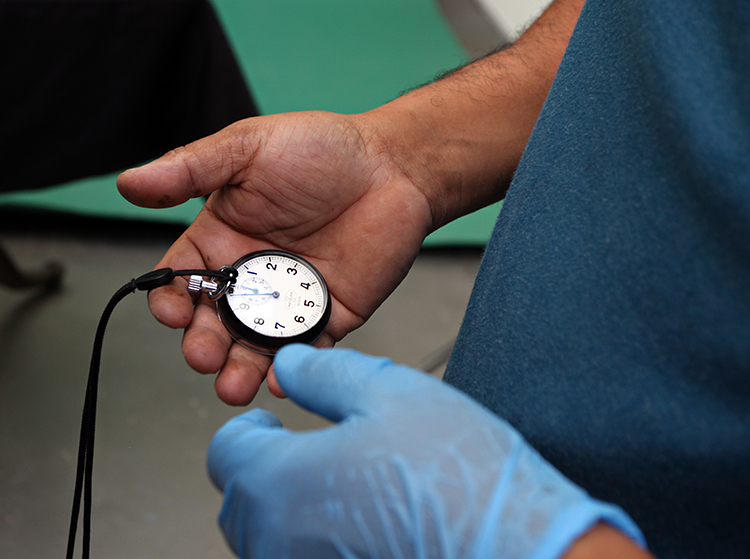 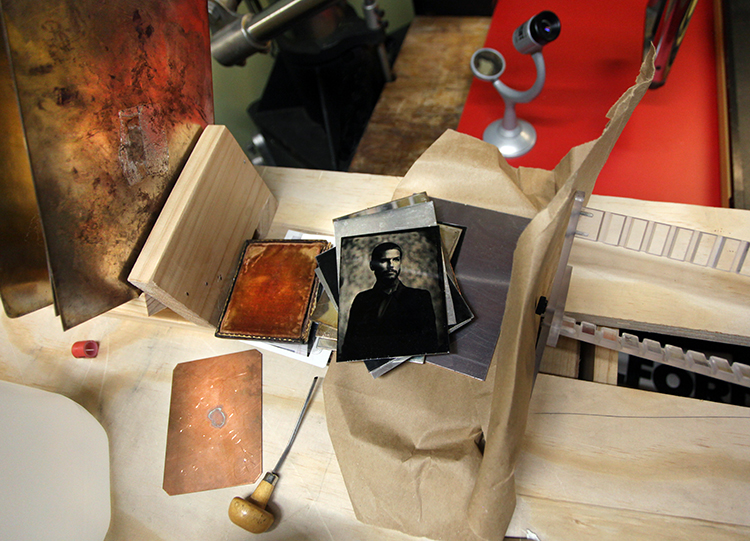 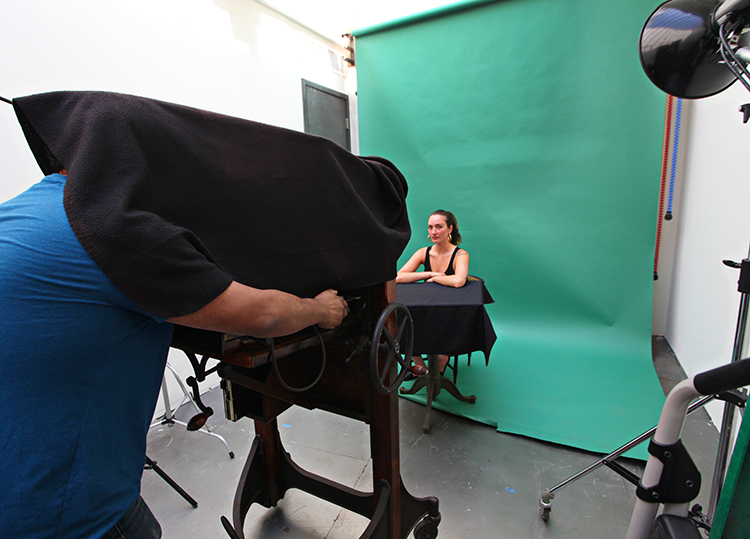 The image projected through the viewfinder appears as through a smokey scrim.

In the darkroom, Carrillo uses an iron developer, a different chemical than is used for more modern developing processes but traditional to wet plate photography process. After a few minutes developing, Carrillo washes the plate and an image slowly appears, emerging from nothing into sharp focus. These are tests to determine the number of seconds needed for the final exposure. 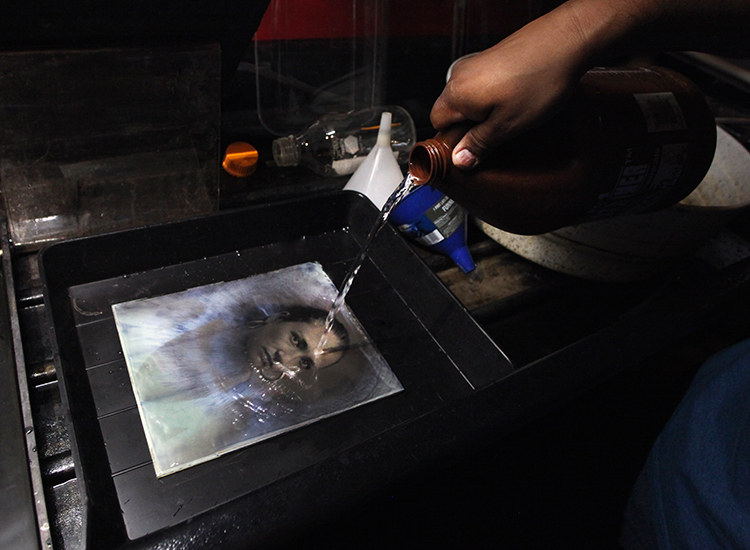 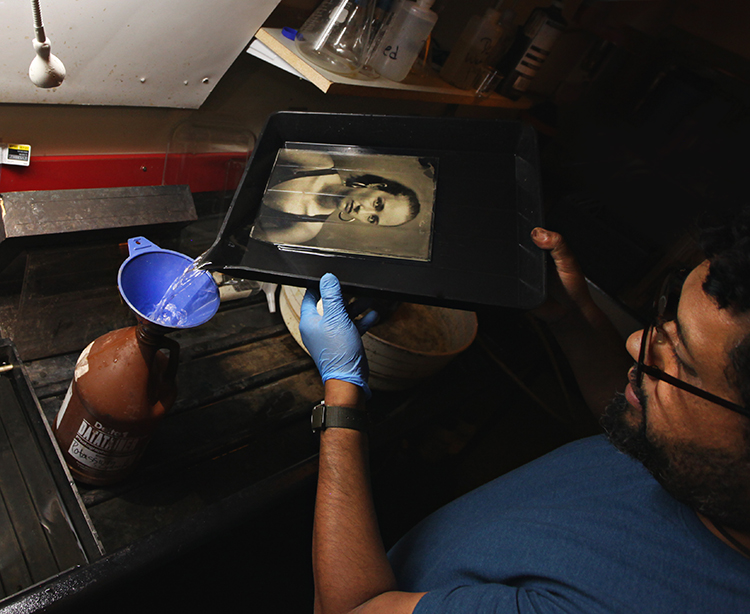 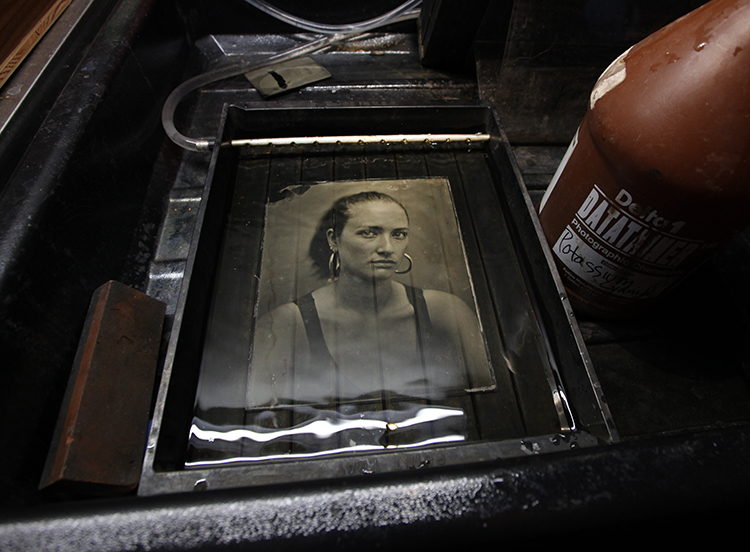 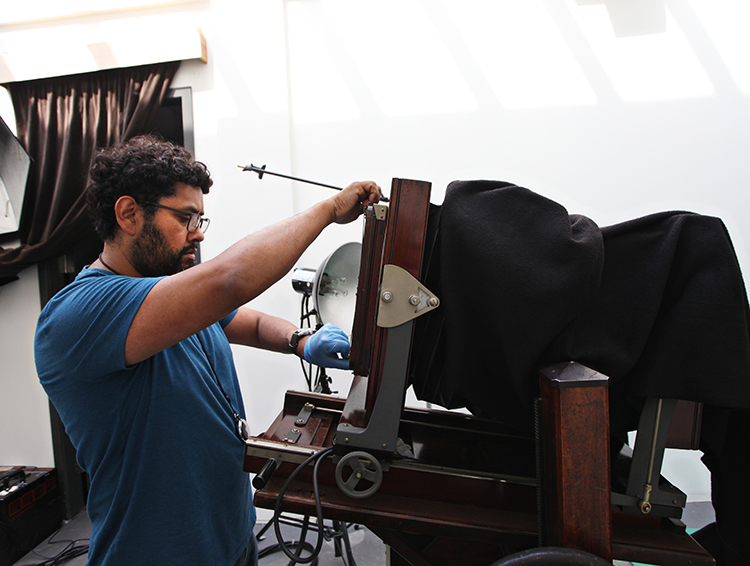 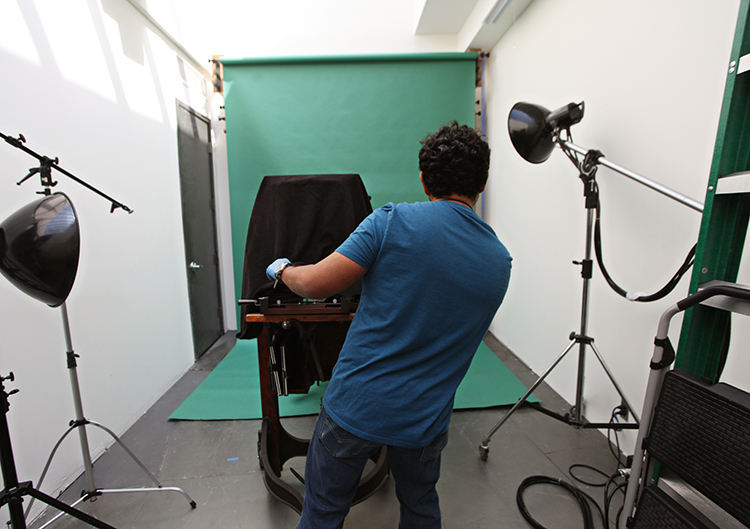 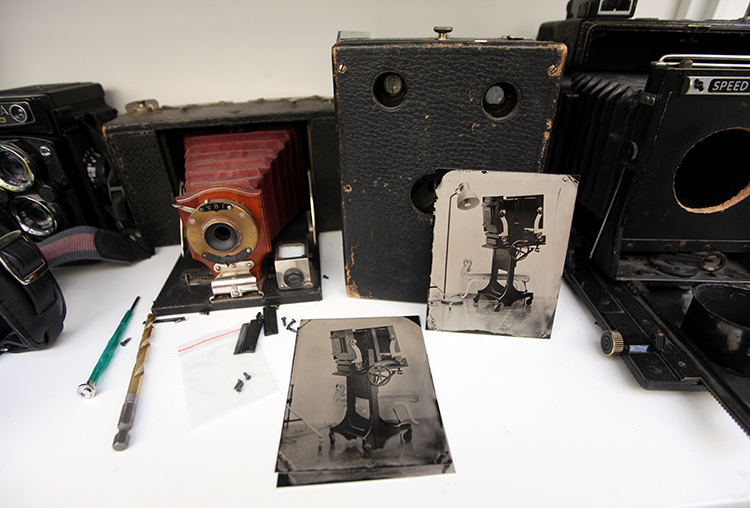 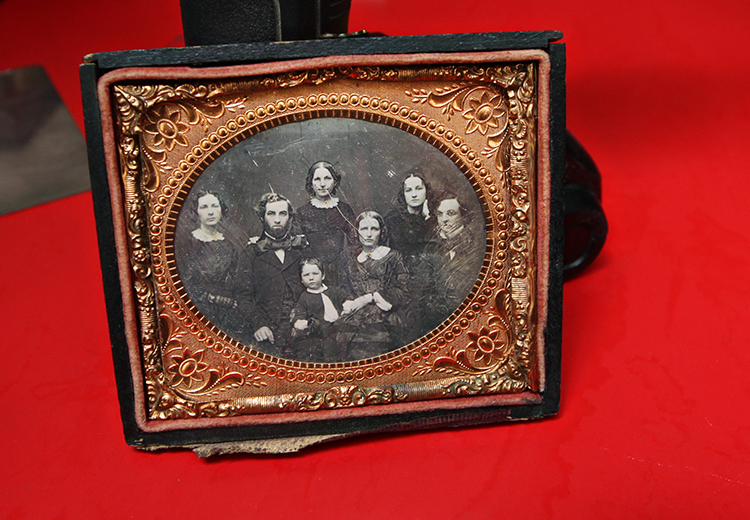 Carrillo has been working on still-life photos, images of tools and other objects in his and other artists’ studios, such as brushes and pencils. His collaborations with photographer Eirik Johnson depict simple folded-then-unfolded squares of paper, captured in the silvery half-light of Carrillo’s process. The images look like the ghostly remains of paper airplanes or crystalline geometric abstractions. 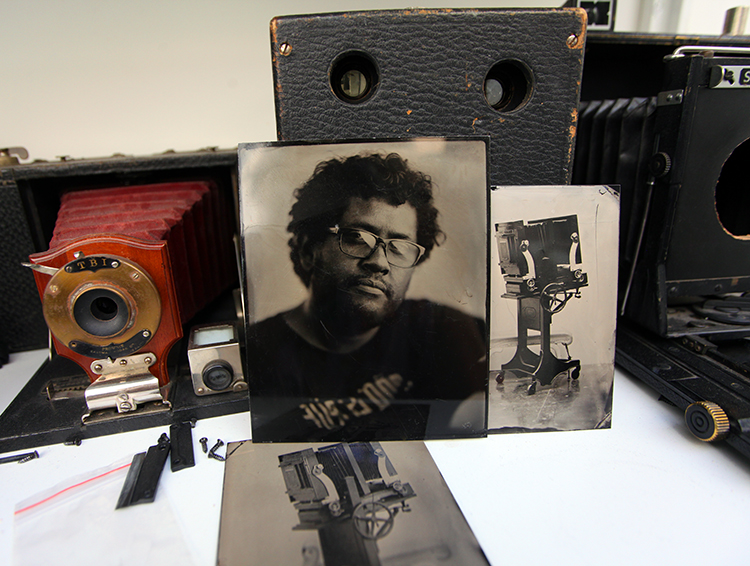 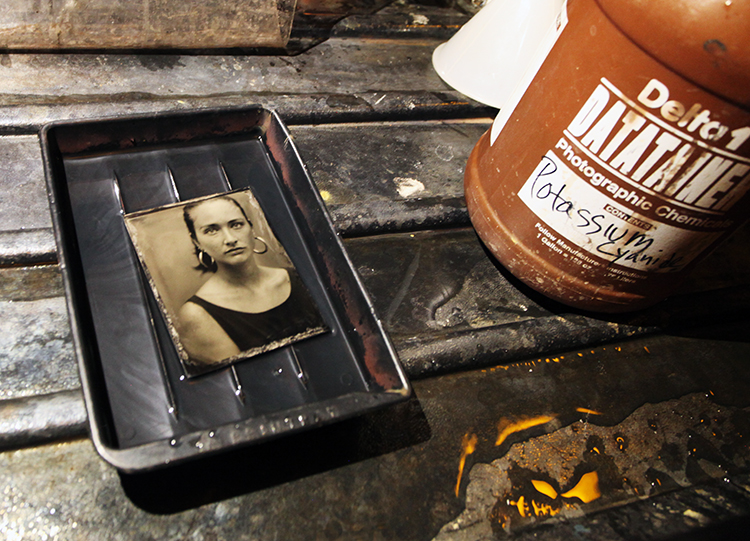 Carrillo has been working with wet plate photography for nearly a decade and his personal collection includes a library of portraits of Seattle’s creative community, forming an archive that serves as both timestamp and catalog of the people who’ve passed through his studio. 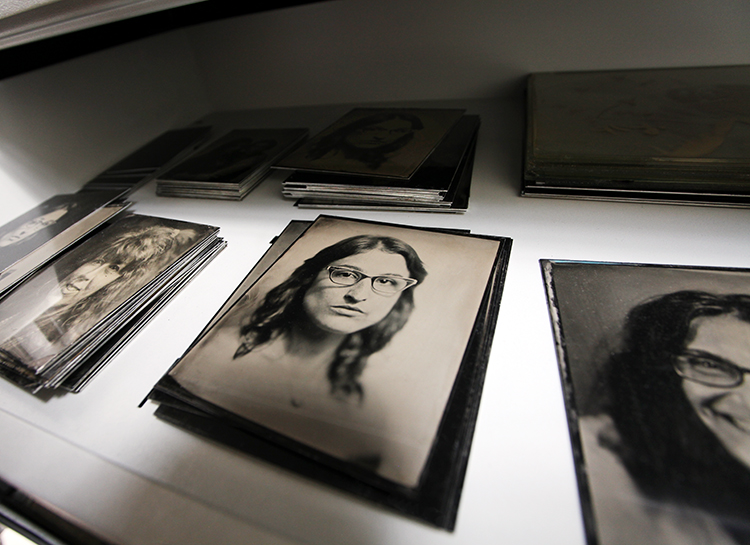