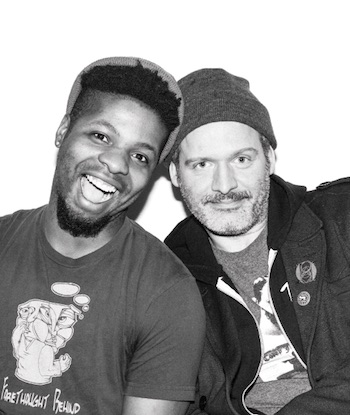 Their very first meeting at the Neighbor Lady in the Central District began haltingly, but after a couple drinks, Genre Benders Erik Blood and Markeith Wiley found a lot to talk about: basically anything that wasn’t directly related to their upcoming collaboration. Now the pair, who’d previously been unaware of each other’s work, have an easygoing rapport based on mutual admiration and genuine affection.

Wiley started his creative pursuits as a teenaged “theatre kid” and has lately stretched into sound and visual design and “tech stuff,” but he’s best known for his dancing and choreography, including his work as director of movement collective the New Animals. Blood is a lifelong musician and music producer who’s helped shape Seattle’s musical landscape through his work with Shabazz Palaces and THEESatisfaction; he releases his latest solo album of dreamy, languid shoegaze-pop, Lost in Slow Motion, later this spring.

Both Wiley and Blood are chameleon-like in their ability to adapt and evolve their output. Both are natural collaborators. Both have honed their own expressive personal style and are adept at drawing out the most expressive efforts in others. To paraphrase Blood, Wiley works with dancers the way Blood works with musicians.

For their Genre Bender performance, Blood was initially inspired by the idea of a gamelan ensemble—a set of musicians playing the traditional Balinese percussion array—propelling Wiley with its meditative, “low vibration” sound. Now he’s composing and recording a soundtrack in the studio, the environment in which he’s most at home.

Early in their process, Blood claimed to Wiley that he doesn’t dance. But after taking in Blood’s recent show at Chop Suey, Wiley disagreed: Blood and vocalist Irene Barber accentuated their music with stylized, synchronized choreography throughout that January show. Now it sounds like Blood and will move alongside Wiley in their GB performance, in which Wiley also hints that “people die, people get resurrected.”

It’ll all come together on the Cornish Playhouse stage for two performances only on Friday, March 4 and Saturday, March 5, though judging by their dedication to the project, the creative partnership may carry on into the future. “Being in each other’s vicinity has created the piece,” Blood says. “I’ll do whatever it takes.” Get your advance tickets here.