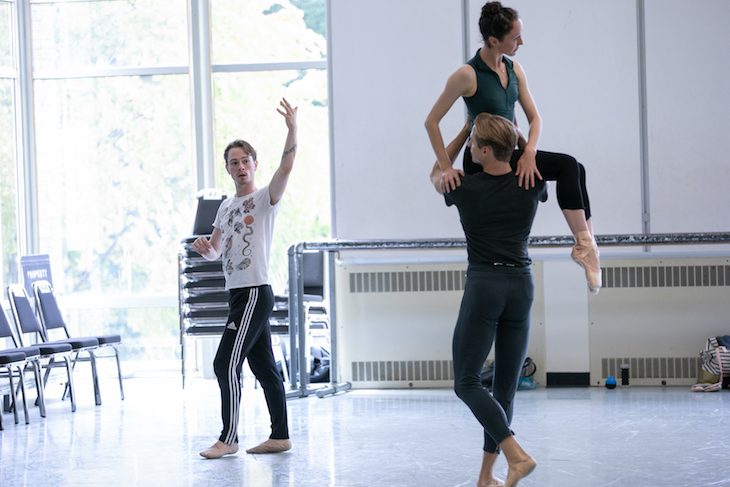 Eight years ago Pacific Northwest Ballet corps dancer Kyle Davis suffered a calf injury that left him unable to train or perform for a long time. Rather than sulk around at home, Davis, who was promoted to his current role of soloist in 2016, started choreographing a three-act ballet in his living room.

“Even though I wasn’t dancing at the time, I had to remain attached to it somehow,” he says one evening sitting in a spare room at PNB’s studios in Lower Queen Anne. “I spent some time working on this ballet, then typed up all the steps and laid it on Peter [Boal]’s desk for feedback.”

After reviewing the work, Boal, PNB’s artistic director, invited Davis to present the 11-minute pas de deux at 2016’s PNB Next Step: a one-night all-premiere lineup of choreography by company dancers. “It was an incredible experience to see my work, the steps I had created, being performed,” Davis says. “I was hooked.” Davis has since choreographed and presented eight works at PNB as well as the CHOP SHOP dance festival and the Choreographic Development Residency at the University of North Carolina School of the Arts.

Tomorrow Davis debuts his most ambitious work to date, titled “A Dark and Lonely Space,” as part of PNB’s All Premiere, running Nov. 2–11. A recent rehearsal revealed soft and sensual duets. With 26 dancers in the cast, live singing (including a 60-person chorus), and music by Oscar-winning film composer Michael Giacchino (Up, Star Trek, The Incredibles), “A Dark and Lonely Space” reaches new heights.

There is a lot going on in “A Dark and Lonely Space.” What can you tell us about it?
The jumping-off point for the concept was the anthropomorphization of the birth of a planetary system, and how that might shed light on us as humans. I’ve always had a really keen interest in science fiction and space in general—I grew up in a very scientific family. There’s the literal “dark” and “lonely” in the title: Everything in space is so spread out and we’re actually quite tiny here on earth. It can also be a metaphor for the mind, which can be a very dark and lonely place. This isn’t a storybook ballet; I don’t want to tell people exactly what to think or how to interpret what they’re seeing. It’s more abstract.

You’re using a piece of music by Oscar-winning film composer Michael Giacchino. What draws you to his work?
The piece I’m using, “Jupiter Ascending Symphony,” was originally used for a sci-fi film, and it has never been performed live outside of a studio before. Giacchino is my favorite composer, so it’s an honor to be able to present that along with my work. When it comes to the music, I was first drawn to his use of the full orchestra. I mean, if you’re going to have all those musicians down there you might as well use them! If you listen to his scores he uses multiple composition styles, he’s constantly changing things up, taking you places with his music.

As a choreographer, what is your process like?
For me, music always comes first. If I can listen to a piece of music and see movement forming immediately, then that’s how I know that I can work with it. If I see nothing I won’t use it. From there, as soon as I see that movement in my head I have an idea of who I want to perform it, and if for some reason that person isn’t available, I won’t use that movement. I’m pretty specific in what I see and how I want to use people. When I starting working on this piece, one of the people I wanted in the ballet was [former PNB principal dancer] Karel Cruz. When I found out he was retiring, rather than put someone else in his part I cut it completely and created something new.

Why such a big cast?
Two of the most exciting things that I can see when I’m watching something on stage are a really nice pas de deux, and then its opposite: a group so large that you stop seeing individuals and it’s just this giant mass of movement. A single bird flying across the sky is pretty, but when you see a flock moving together in unison, that’s impressive.

The costumes for this piece were designed in collaboration with company member Elizabeth Murphy. What will they look like?
They’re all pretty spectacular. Even if someone is just wearing a leotard, it’s not just your standard single-color piece. We’re using fabric hand painted with images from the Hubble telescope of the nebula that we live in and using the colors of those images throughout all the costuming. Most of the fabric will have a layer of mesh over it so that it looks like it’s changing color in the light. The solo soprano singer who will be lifted up on a platform—her dress is 12 feet long. What can I say? I like big projects. If this ends up being the last thing I ever choreograph, I don’t want to just play it safe.