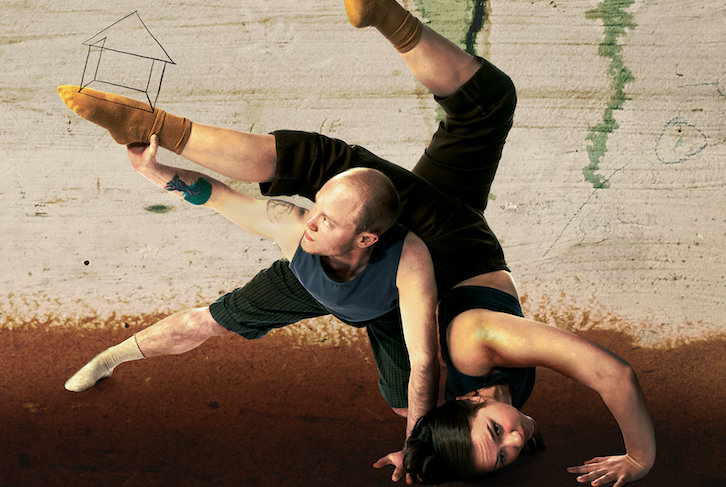 Christin Call has been diligently producing interdisciplinary dance works in Seattle for the better part of a decade. Sometimes quirky and whimsical, other times ritualistic or wild, Call’s modus operandi layers the formalism of ballet with her sensibilities as a visual artist and poet—dancers using their pointe shoed-feet to tear up collages or dancing in a pool of milk swirling with colorful pigments. I’ve even seen her perform in an old-timey swim cap to a monologue about a movie star. Producing under the umbrella of Coriolis Dance, the company she co-directs with Natascha Greenwalt, Call sometimes flies under the radar, but an upcoming work, her first solo-directed, evening-length piece, positions her in the spotlight.

What is Home an Obscure Kingdom an Opera Buffa It’s You Always, a dance show with film, spoken word, an art installation and a two-storied set, premieres this weekend at Northwest Film Forum. Call’s research for the show began with a 2016 residency through Seattle Demo Project, an organization that engages soon-to-be-demolished structures through art. For two weeks in a derelict Capitol Hill home, Call filmed dancers improvising in response to poetic prompts inspired by the space, creating a short film that became a jumping off point for her evening-length work. I was part of this early residency, as a dancer, so Call and I had plenty to talk about when delving into the developments of the last two years.

What was it like working inside the Seattle Demo Project house at 12th and Thomas?
My response to the space was really strong—100 years of people residing in this space, the changes to the architecture, and also more recently some folks had been squatting in the space for the last 10 months. There was this contrast between a space being taken care of and renovated over time, and then this destruction and internal demolition that had already kind of started. But in this weird, paradoxical sense, those same people had left love notes to each other on the walls and left ornate symbols that they painted. It was full of juxtapositions that seemed to encapsulate tensions and fondness of our idea of home.

You’ve been asking this question, What is Home? in creative process workshops that you’ve led over the last few years at Velocity Dance Center. How has that informed your research?
For a while, it was just my personal investigation of ways that I felt like I belonged in places, with people, and ways that I had lost that sense as well. When I knew that I was going to be able to present it at Northwest Film Forum I started to look more outward and think about it in a broader sense. Because there’s this question of what is going on in our city and do I still belong here? or can I belong here? is something that people who have been here a long time are asking. There are people who are just coming in who are asking these questions too. It seems like a resonant question of the city at this moment.

A lot of people think of ballet as being rigid or antiquated, but you use ballet technique to make work that’s strange and contemporary.
It’s the same relationship I have to words. I love antiquated words. I love the grandiloquence of things that seem obsolete, and bringing them back fresh into this current world that we live in, and I think ballet is the same. The vocabulary, yes, there are really old ideas in there, but I feel you can always attach new meaning to them.

Are you using as much classical ballet vocabulary as in your previous work?
I think it’s still very classical. But I’ve also been researching vocalization and text a lot and how to bring the voice and poetry into a process. I finally feel like I’ve jumped over some kind of block that I’d had for a lot of years, about how to stay in the density of the form of poetry when you don’t have the advantage of the page. Because when you have the book in front of you, you can go back, you can re-read lines over and over as often as you want. How can it have that same sort of frictive quality that surprises you? The way in which the text is spoken, manipulating your voice and the delivery and enunciation of the words, has a similar kind of impact, the surprise that happens from the two seemingly disparate words.

You’re coming at this from so many disciplines. Can you talk more about the installation?
The installations will be set up like a museum experience. It’s my infant steps into trying to be more pro-active about the way that I’m including others [in my work]. The installations are meant to bring some of the analogies of the work into a person’s individual process and body. The work has become sort of this zany sci-fi story where the show, it’s basically an object that has been unearthed and so this museum has sort of clamored up to house the object.

What’s the story?
It’s five characters. They go through two collapses of the world because they’re attempting to lift up the lowest person and it completely fails two times. The third time is when something else is able to occur—the narrative is able to travel somewhere else instead. It’s a lot about failure to get along but is also really hopeful and along the way there is a lot of absurdity. It’s melodramatic, but in a way that I think people will really connect with.

This idea of trying to get along and failing, how do you see that as a recurring issue?
On a personal level, I decided that in order to make this work and be true to what it was, I had to do more work in terms of reaching out and talking to people and not be afraid that I might be rejected. In that sense I’ve been surprised, and I feel a lot more included [in my community] now that I have done some of that work.

Seems like through the process of making this you’re answering your questions around home in your own life. Though if I remember you almost moved away; at one point you were accepted into grad school for poetry, is that now off the table?
I decided not to go. So, it’s on hold for now. That’s part of What is Home. Wanting to go to grad school was definitely a response to not feeling at home in Seattle anymore, for many, many reasons, but some things changed in my life, some things changed in my career, and I was able to look with new eyes on this city.

See What is Home an Obscure Kingdom an Opera Buffa It’s You Always on July 27 & 28 at Northwest Film Forum.