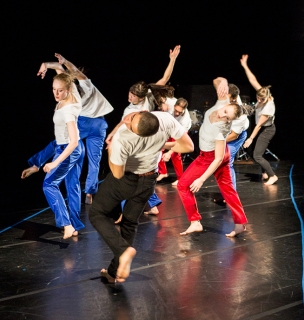 Dancers from all over the country are returning to Seattle this month to celebrate the 50th anniversary of their alma mater, the University of Washington dance program.

Today the UW dance program is diverse, innovative and nationally respected, offering an undergraduate major and minor as well as a highly competitive MFA program. But prior to 1965, dance classes at UW were a mixed bag—modern dance was offered through the Physical and Health Education program, ballet through Drama. An official dance degree wasn’t created until ’65 and for years it lived under the Drama and Music departments. The autonomous dance program was finally formed in 1988.

Opening Doors: Celebrating 50 Years of Dance at UW is a long weekend, Oct. 16–20, crammed with events, including showcases of alumni choreography, master classes and two nights dedicated to the explosive (and exploding) world of dance film. Research presentations address topics such as “Movement Generating Form: Connections Between Dance and Architecture” and creative process (the latter is the subject of a joint presentation by biochemist Trisha Davis and dance artist Beth Graczyk).

The slate of workshops spans a wide range: Catherine Cabeen—who has been a member of the Martha Graham Dance Company and the Bill T. Jones/Arnie Zane Dance Company and runs her own company in Seattle—presents a workshop in Graham technique. Peter Kyle, a veteran of Mark Morris and many other companies, teaches Slow Tempo, a technique based on the work of Japanese theatre director Shogo Ohta. Dancer, choreographer and durational performance artist Alice Gosti leads “a movement and imagination workshop against self-censorship and judgment.”

A three-night showcase features work performed and choreographed by alumni and faculty, including UW’s 25-year-old Chamber Dance Company, made up of the program’s MFA candidates. Velocity Dance Center, whose artistic director Tonya Lockyer is a UW dance grad, hosts two nights of the showcase; the third is at Meany Studio.

It’s a lot. But it takes a lot to reflect and celebrate the intellectually diverse population that has graduated from this program for 50 years. Most events are open to the public and all of them are free, though space is limited. For Salk, the event isn’t only about welcoming back graduates from around the globe, it’s also about inviting the larger Seattle community into a tightknit world full of rituals and shorthand.

“We’re trying to broaden the idea of what technique means and we’re not alone in this,” Salk says, explaining that a lot of programs have to rise to student demand for more diverse instruction or risk remaining old-fashioned.

“We teach [our students] as if they’re going to all go off to perform, but that’s not the main goal,” Salk says. “We think about dance as this complement of creative work, practice and theory.” Many dance undergraduates are double majors, she explains, so they might study both dance and anthropology, biology, archaeology, women’s studies…

“We’re thinking more broadly about how dance can affect people regardless of what they do,” Salk says. “There’s this rigorous dance training, but then there’s also this idea of training human beings to be valuable members of society.”