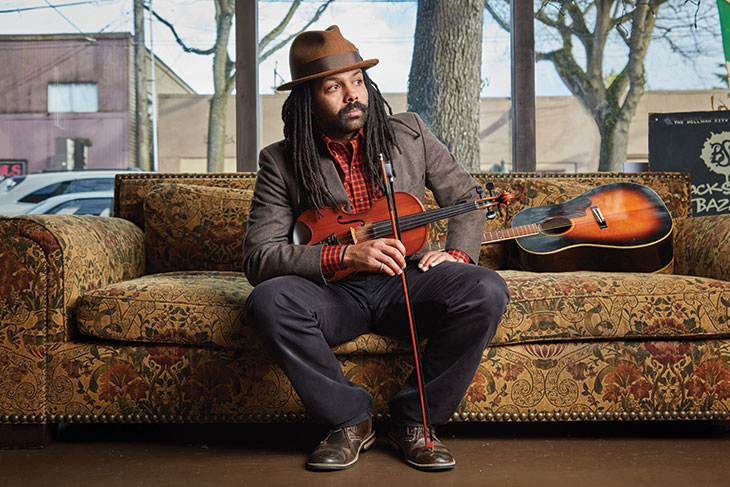 AGE 30
HOMETOWN  Born in Lesotho, raised predominantly in Phoenix, with stints in Seattle and Zimbabwe
KARAOKE SONG Anything Stevie Wonder, especially “Boogie On Reggae Woman” or “Superstitious”
PERSONAL MOTTO  Put an egg on it!
HAPPY PLACE Thanksgiving Day, in a tree house (the latter hasn’t happened yet)

When Ben Hunter and his bandmate Joe Seamons headed out on tour last spring, they spent three weeks following the Mississippi River south from Chicago, exploring regions of American music.

“We get a lot of this music from recordings,” Hunter says. “We wanted to try our best to discover how this music still exists in the regions of the country that we got them from in the first place.”

In Chicago they met a tap dancer whose mentor had performed in the old Harlem Cotton Club, with what Hunter calls “direct lineage” to greats like Cab Calloway and Duke Ellington—and he inspired them to start conducting interviews with folks they met on tour. In Davenport, Iowa, they talked to banjo players and, rarer, fife and drum players. Then onto St. Louis, Cape Girardeau, Memphis and finally Como, Miss., where they spent most of a week listening to stories from diddley bow players, piano players and pig farmers.

“It’s interesting how this music gets passed on, to whom it gets passed on, why it gets passed on,” Hunter says. Mississippi left such an impression that he and Seamons are heading back in February to conduct more interviews—and bringing a cinematographer to shoot footage for the first installment of a documentary series.

“Go back through history,” Hunter says. “The songs are stories about something that happened, stories that can teach us something.”

Hunter was “raised classically” on violin, but now he mostly plays fiddle—roots, folk, bluegrass, blues, gospel, you name it. The music he plays not only spans an array of genres but a huge swath of history. He and Seamons recently recorded “Sinnerman” as performed by Nina Simone; they play “St. James Infirmary,” which goes back to 17th-century England. Last year, the duo won the honor of representing Washington state in the International Blues Challenge, which takes place in Memphis this month. Also forthcoming for Hunter in the months ahead: a new tango and flamenco gig and an out-of-town production of Cotton Patch Gospel.

“Music, obviously, is a tool for our soul individually, but it’s exceptionally powerful, too, to learn about people.”

A desire to learn and connect drives Hunter’s work at the Hillman City Collaboratory, a thriving hive of South Seattle community that Hunter co-founded two years ago. The Collaboratory occupies a beautiful turn-of-the century building and the big open room at its center is dotted with homey furniture, a piano, a pool table, its walls hung with art. The building hosts performances and events of all stripes and is now home to 29 partners and coworkers, including chef Tarik Abdullah’s cooking classes for kids, a progressive church and a co-working space that serves the Seattle Globalist and various community organizers. One of its anchor tenants is Hunter’s nonprofit, Community Arts Create, which, as he puts it, is about “instilling a pride and ownership and comfort in the vulnerability of your expressions.”