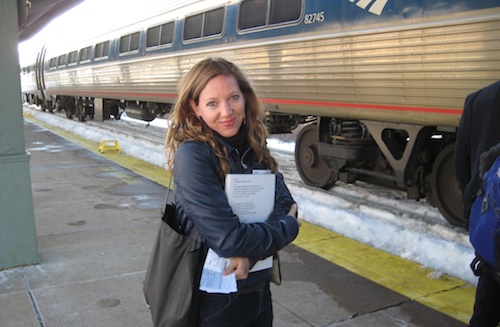 When I first came across Bluets, in 2009, I’d never heard of Maggie Nelson. To be fair, I was 24 and had not yet heard of many writers who I should have; Nelson, not much more than a decade older, had already published three collections of poetry, two memoirs and an academic study of female poets and artists of “the New York School” (Bernadette Mayer, Joan Mitchell, Eileen Myles to name a few), an artistic movement from which Nelson’s own work descends. Years later, I read that study, cleverly titled Women, The New York School, and Other True Abstractions, and found it to be one of the most fascinating works of academic criticism I’d ever encountered.

First, however, at least in my own chronology, there was Bluets, a thin, unassuming volume published in 2009 by Seattle’s Wave Books. Neither personal narrative, critical theory or prose poetry, it was instead some combination of the three. Comprised of 240 sequentially numbered “propositions,” Bluets drew on artists and writers as varied as Wittgenstein (from whom Nelson borrowed the form), Goethe, William H. Gass, Joan Mitchell and Emmylou Harris to convey a personal story of heartbreak through the eruditions of others. I experienced it as a revelation. After I passed it along to my girlfriend, who loved it nearly as much, she suggested that we buy 10 or 12 copies and give them away to friends, and we did.

We couldn’t have been the only ones. Nelson was well-respected, but after she became a minor literary celebrity. This was not, as it often is in the contemporary publishing industry, because the deck was rigged. Although Wave is one of the most highly regarded small presses in the country, it’s not known for its PR pushes. The book was popular because it was loved—because people who loved it passed it along to other people, who grew to love it in turn.

Nelson’s follow-up, The Art of Cruelty: A Reckoning (2011), was a more straightforward work of cultural criticism, a book-length study of Western artwork that seeks to emancipate its audience by inflicting violence upon them. Think of the playwrights Bertolt Brecht and Antonin Artaud in the early part of the 20th century, or the filmmakers Michael Haneke and Lars Von Trier or the performance artists Ana Mendieta and Marina Abramovic in the latter.

When, if ever, is it necessary to be brutal? When do depictions or manifestations of violence succeed in undermining sadistic impulses, and when do they perpetuate them? These are a few of the questions that The Art of Cruelty raises. Part of its genius is that it situates these questions not only within the tradition of Western art but also within Nelson’s own personal body and mind.

The Argonauts (2015), Nelson’s most recent book, is more rigorously theoretical than Bluets and more searingly personal than The Art of Cruelty. For many years she has taught at the California Institute of the Arts in the School of Critical Studies. She has said that, in her work, she has tried to bring her engagement with the public world of academia together with the equally exacting demands of the private. This duality is on full display in The Argonauts, a “lyric essay” (perhaps) addressed to the “you” of her romantic partner, transgender performance artist Harry Dodge. While the cisgendered Nelson is pregnant with their first child, Dodge is in the process of transitioning from “female” to “male” (they prefer to identify as neither). Nelson draws on the work of Judith Butler, Eve Kosofsky Sedgwick, Jacque Lacan, Michel Foucault, Gilles Deleuze and others to grapple with hetero (and homo) normativity, gender and the body, filtering the headiness of queer theory through the corporeality of her own experience. The book is a mite too theoretical for my taste, but I’m a straight, cisgendered male who’s perhaps not able to fully appreciate the contribution it makes.

“Every word that I write could be read as some kind of defense, or assertion of value, of whatever it is that I am, whatever viewpoint it is that I ostensibly have to offer, whatever I’ve lived,” Nelson writes in The Argonauts. It’s precisely this ability to read herself against the ideologies, signs, and cultural values swirling around her that makes her one of the most compelling writers working today. At its best, her work brings to bear the brunt of critical theory on a world that exists beyond academia.

Maggie Nelson gives a talk on “The Writing Body” on Thursday, January 28 at Hugo House.