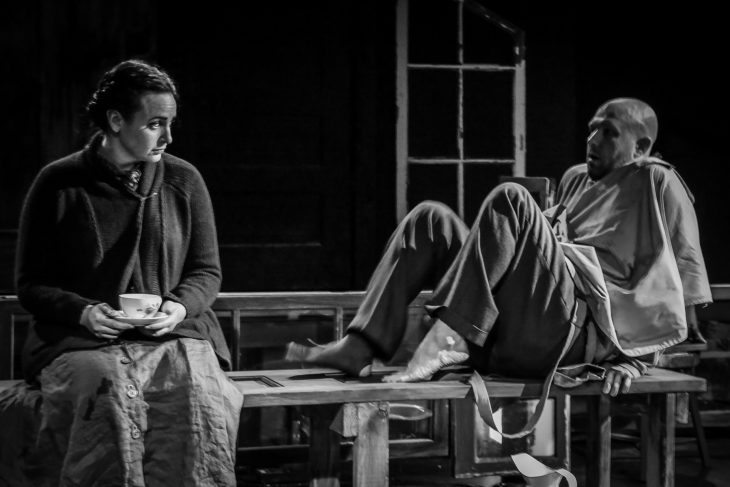 Do the ends justify the means? Have modern-day people become numb to the violence that surrounds us? Akropolis Performance Lab’s new adaptation of Dostoevsky’s Crime and Punishment attempts to tackle these questions, but gird your loins and mainline some dark roast: it is a physically and intellectually demanding production that requires emotional stamina. It’s also important to possess a nodding acquaintance with the source material: classic Russian novel published in 1886, dark and broody; you struggled through it Junior year, remember? The cruel and gloomy world is fraught with ax murder, anguish, animal abuse and singularly Russian teeth-gnashing angst. Set your expectations accordingly.

Crime + Punishment is set in grimy 19th century St. Petersburg, where there lives a psychologically tortured and terminally broke university dropout called Raskolnikov (Tyler J. Polumsky). He harbors a warped theory, paraphrased thusly: It’s OK to do terrible things if you are a great person who will eventually do good things. Or something like that.

Raskolnikov, in an appropriately fraught and anxious performance by Polumsky, is in a miserable condition: rolling around on the ground a lot, clutching his head in his hands, lamenting his poverty and perpetual ennui. Burdened by debt, he turns again and again to his neighbor, Alyona Ivanovna, who just happens to be an old-school pawnbroker and moneylender of near-Scroogian proportions, at least by Raskolnikov’s own tortured reckoning. In a strong performance by Emily Jo Testa (who did double duty as Raskolnikov’s mother, Pulkheria) I actually found Alyona to be quite reasonable and endearing, a no-nonsense old woman who was good at math, endlessly humoring Raskolnikov’s neediness, appropriately brusque but kindly buying his old junk on consignment, constantly calling him “dear.”

As Raskolnikov’s mental illness progresses and his problems compound (he’s got a widowed mother and a destitute sister selling herself into a loveless marriage to worry about too), he convinces himself that not only would the world be better off without the poor old pawnbroker, who becomes the hapless target of his anger and angst, but that he be doing the world a favor by taking care of the matter himself. Poor Alyona winds up with an ax in the neck and Raskolnikov, just a few rubles richer after murdering and robbing her, spirals into irredeemable madness. Ultimately, all of his philosophical gymnastics and wild justifications cannot redeem the fact that he’s just a murderous loser, nothing more.

Matt Sherrill as Razumikhin was fun as a glib and feckless fall-down drunk, the closest thing Raskolnikov has to a best friend. Porfiry Petrovich (Jennifer Crooks) also delighted as the lead investigator of the murder; she was fun and frolicsome as she played cat-and-mouse with Raskolnikov, eventually getting him to admit to his guilt.

Also of note was the ever-present hurdy-gurdy lurking just offstage, played by music director Zhenya Lavy, setting the play’s tone and punctuating its scenes. It created a medieval, monastic tone, soaring and grinding in a plaintive wail, speaking of tension and loneliness, often accompanying the ensemble as they sang mournful Russian tunes. They were truly haunting and beautiful, but I could have done with fewer of them.

The staging was sometimes a problem. Many crucial scenes were played upstage, on the very lip of the stage, with a lot of kneeling and aforementioned floor-rolling by the actors. The vast majority of the audience, past the second row, myself included, wound up craning their necks at odd angles to see what the heck was going on. And although the world of Crime + Punishment world is dim and gloomy, the lighting design sometimes left speaking characters in the dark.

Director and playwright Joseph Lavy deftly adapted the old novel to the new script—quite a feat. But, inevitably, the question must be asked: was Crime + Punishment worth a full three hours of investment in time and attention? A touch more brevity and a lot of tightening would have served this production well.

Crime + Punishment runs through Jan. 13 at West of Lenin