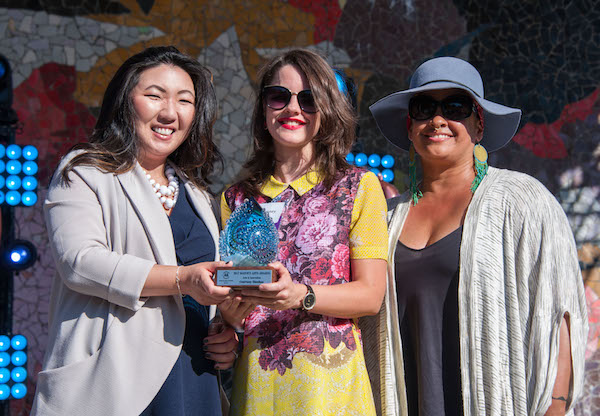 Courtney Sheehan is departing as executive director of Northwest Film Forum, leaving behind a five-year box office high and an emerging model of community engagement. Under her leadership, the Capitol Hill nonprofit cinema saw an expansion of multidisciplinary programming and a 25 percent rise in attendance. With Sheehan at the helm, the Film Forum has become a beacon of shoestring innovation, hyper-local independence and radical inclusion in a city throttled by the monoculture forces of global capitalism.

“I’ve come to realize that curating people is more interesting than curating films,” Sheehan says. “Conversations with artists, community partners or people on the street can be the source of some of the best ideas. That’s been my fuel: Never get bored and surround myself with people who challenge me to expand my scope of vision every day.”

Sheehan started as a program director in 2013 and became executive director in 2015. When she signed on, ticket sales were in deep decline as the Film Forum confronted the problems plaguing an entire industry that struggles against streaming media like Netflix and their disruption of personal moviegoing habits. Sheehan’s approach has been to recast the ways in which audiences interact with the moving image, leveraging near-total creative freedom against the limited resources of a small nonprofit. She recounts a friend likening her position to a line from the genie in the Disney movie Aladdin: “Infinite cosmic power! Itty-bitty living space.”

In practice, this looks like a calendar full of films from the obscure to the acclaimed, sprinkled with live events that confound conventional description: a nihilist game show, a satirical city council meeting (full disclosure: I host and produce that show, Shadow Council, as well as a political-comedy talk show called The Seattle Process), a local band performing a live score to a classic film. There are festivals: the Children’s Film Festival, ByDesign, Cadence: A Video Poetry Festival, Seattle Asian American Film Festival. There are events spurred by local and global events like the Seventh Art Stand, a series created in response to the Trump administration’s Muslim travel ban featuring films from countries affected by Islamophobic immigration policy. And there are ongoing filmmaking workshops, equipment rentals and youth education initiatives including internships, field trips and summer camps.

This broad array of programming and the growing audience that supports it have garnered Sheehan wide acclaim, from the Mayor’s Arts Award to Seattle Met’s “50 Most Influential Women in Seattle” to a spot on this magazine’s 2015 Artists of the Year. Sheehan is quick to point out that lately she’s done the least amount of direct programming of her entire tenure, crediting staff and community partners for recent box office success. But she clearly plays an outsized role, both in the programming and the overall vibe of anything-goes innovation that the Film Forum has come to represent.

Sheehan will stay on until October to help transition to new leadership. Next week, on April 19, NWFF throws their annual gala—donors are as crucial as ticket sales in keeping the doors open—and they recently created a new position, community programmer, as well as hiring a new education and artist services manager. The 23-year-old institution Sheehan reinvented over the past half-decade forges on.

I ask Sheehan to share some highlights of her time at the Forum and she describes what she calls “a classic Film Forum hybrid live event” that happened last month: a live dance performance coupled with 16mm film and video by visiting Minneapolis dance duo HIJACK. Fifteen minutes before the show was set to start, the power went out on the entire block. Five minutes before show time: still no electricity. Sheehan conferred with the artists and they figured out how to stage an adapted version of the planned performance: By using a battery-powered projector and getting the audience to point their cellphone lights at the dancers, the show could go on.

“Everyone’s shining their flashlights on them,” Sheehan says. “They’re both lying on their backs on the stage with their legs lifted up, and as they were each opening their legs into a ‘v’ the lights came back on. It was the most beautiful thing. I couldn’t imagine being anywhere else with any other conglomeration of people—from the amazing staff that pulled it off at the last second to the incredible artists to the committed, open-minded audience members who said, ‘Sure, I’ll try this.’”

Sheehan says she’s giving six months notice out of respect for the organization. She’ll take that time to help the Film Forum transition to its next chapter as well as explore opportunities for herself in whatever form they might take.

“I love the Film Forum with all my heart—it’s been my life and my family for five years,” she says. “Life is short and the world is big and it’s time for the next thing.”