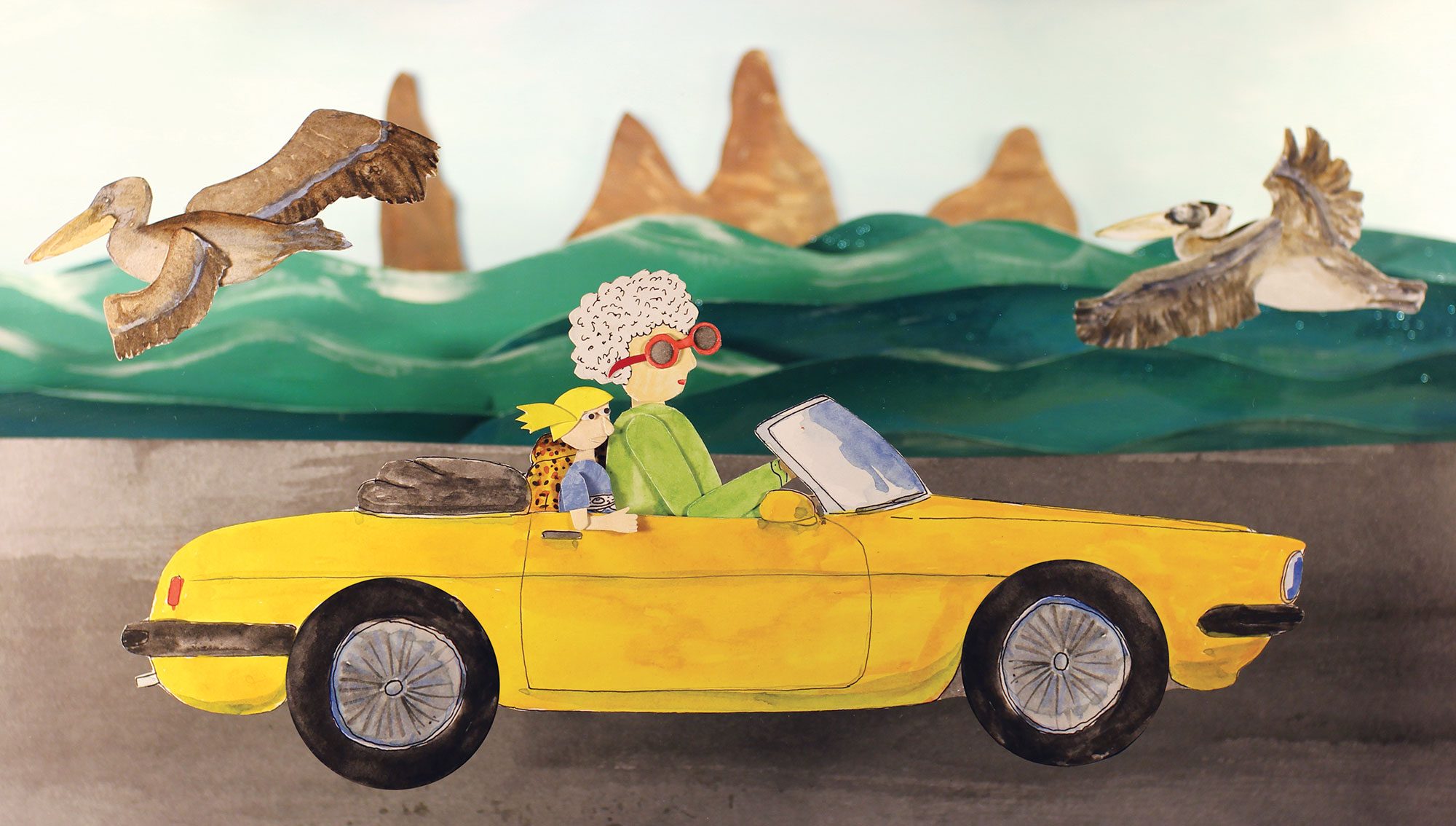 Unafraid to build a boat, dress entirely in velvet, teach kids, interview rock stars or be a rock star, Petersen knows a thing or two about courage. He’s an artist with the rare ability to connect with people through a variety of mediums—music videos, writing, visual art, music, film. His multi-modal work is so excellent and affecting that last month he won a $25,000 Neddy Artist Award, a prestigious prize stewarded by Cornish College of the Arts. On top of all that, Petersen is trans, and the journey to a happy adulthood for anyone born in a body whose sex and gender don’t match is unfortunately a test of courage at this point in history.

But even Petersen needs encouragement from time to time—and animator Web Crowell, creator of the feature Borrowing Time, short film Parasol and the Rocketmen web series, was happy to return the favor during a meeting of the Seattle Experimental Animation Team a few years ago. The group was discussing the seductive but daunting prospect of making feature films; Petersen said he dreamed of making one but that it seemed a nearly impossible amount of work. “Web said, ‘Just do it. Put your balls on the table,’” Petersen recalls. “Lots of people make features, lots of them suck. I decided, why not try?”

Three years later his debut feature, Torrey Pines, premieres this month at the opening of Twist: Seattle’s Queer Film Festival. The movie is an autobiographical animated feature about Petersen’s childhood kidnapping by his schizophrenic mother and the hallucinatory road trip that ensued. Anyone who’s made a lump of clay and pipe cleaners wiggle around on film for 10 seconds knows a full-length film animated with hand-painted paper puppets and cut-paper collage sets is a tall order. But Petersen’s creative pyromania blasted Torrey Pines from dreams to reality.

The film began as a song, with lyrics by Peterson and music by folk-punk singer Kimya Dawson (formerly of the Moldy Peaches). In it, Petersen described his early life in San Diego:

How do I tell the story of my mother
gone crazy
last seen living in the woods
outside of Branson Missouri
(pronounced misery)
I try to write it down,
I cannot recollect the order of the situations
what came to pass and what happened next.

When Petersen toured with Dawson, he found that the song resonated with audiences. Petersen says with a smile, “People would come up and say, ‘My parents are crazy too!’”

Petersen first picked up a camcorder at his middle school, which loaned them out to students for the weekend. Later, he documented Riot Grrrl shows in 1990s Olympia and Seattle, which evolved into a filmmaking career and music videos for the Thermals, Laura Veirs, Earth, Minor Alps, Quasi, Deerhoof and Sean Nelson, among many others.

The aesthetic of Petersen’s videos is childlike, featuring squiggly hand-drawn ghosts and claymation dinosaurs. (As a child, Petersen loved the dinosaurs in the walls of Peewee Herman’s house.) But, like Torrey Pines, a closer look reveals striking technical skill. One especially impressive scene in Torrey Pines depicts a band playing in a garage, and every movement of the musicians’ paper hands is timed perfectly with the sounds of the instruments, accomplished with a multiplane and a lot of math.

Crowell, who cut the trailer for Torrey Pines and also provided meows and kissing sounds for the film’s delightfully wordless soundtrack, met Clyde while the two were teaching at Coyote Junior High. They now live together with a few other artists in a barnlike house in Ballard where they project movies on the wall of the ice factory next door on balmy summer nights.

“I’m a big believer that the materials and methods you use to produce something change how the audience experiences it,” says Crowell, a professional animator himself. “You can simulate a lot of handmade technique, but there is something very hard to replace about the inaccurate noise of animating something by hand. If [Torrey Pines] was CGI, or done in the style of a big studio, you would get a really different sense of who was telling the story. Part of the beauty of Torrey Pines is the immediate reminder you get of seeing the world from a kid’s wide-open sensibility.”

Petersen’s impressive catalogue of work includes a rotating selection of side projects. His web series, Boating With Clyde, features live performances by local and touring musicians on Lake Union in a homemade rowboat. The sets are framed by low-key interviews, and news from anchorman Pinky BottomFeeder, an adorable pink fish puppet. Petersen once reproduced the show at Gallery4Culture as an installation among cardboard lily pads, talking wall-mounted fish and 20 three-minute videos of musicians playing their songs.

He’s also made music since childhood, singing, songwriting and playing a variety of instruments including guitar, bass, drums and banjo. (Currently he’s focused on pedal steel guitar.) His punk band Your Heart Breaks has grown to 50 members and can frequently be seen live in Seattle when not on tour. The band might be better described as a collective, as its members live all over the U.S. and the lineup depends on where the band is, who’s on tour and who’s in town.

As part of Out of Sight last August at King Street Station, Petersen and printmaker Kerstin Graudins exhibited an artwork combining Graudins’s trademark vibrant patterns of images (for this piece, including cowboys, sailors, flames, entwined women and jewels) with these words from Petersen’s own artist statement:

To those who don’t give a fuck.
To those who started the fires
To those who fan the flames
And to you who will burn  this fucking place to the ground.

Take your shirt off.
Dance with me to Wild Combination.

As Petersen carves a new facet into the glittering prism of queer art and film, he is full of love and admiration for his predecessors. He loves movies about endurance—people pushing themselves to the absolute limits of their abilities—and his cinema heroes include John Waters and Werner Herzog, and actor Silas Howard, especially his role in By Hook or By Crook. His favorite visual artists are Delmas Howe and George Quaintance, both of whom are obsessed with the eroticism of the male form, particularly cowboys, sailors and men in other trades regarded as the embodiment of traditional Western masculinity.

In Torrey Pines, a young Petersen fondly imagines himself transforming from a pubescent girl to a ripped, bearded man who would not be out of place in a Howe or Quaintance painting. One wishes to assure the pigtailed preteen Petersen he will grow up to be the man he hopes to be. 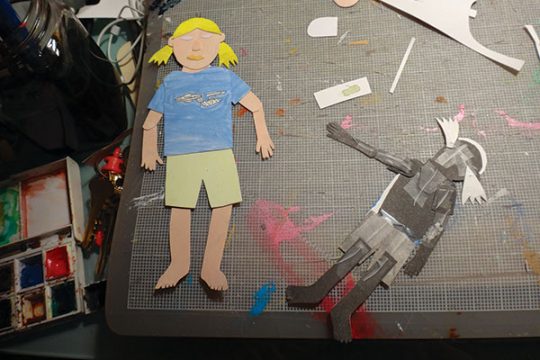 Tiny pigtailed puppets of Petersen, as his 12-year-old character appears in the animated feature.

Petersen grew up just a few blocks from Torrey Pines State Beach and Natural Reserve in San Diego, named after a rare pine that grows only on the bluffs above the ocean there. As a child, the park was a daily respite from a turbulent home life. When he was 12, his mother took him from Del Mar, Calif., to New York, without bothering to mention the trip to his dad or anyone else. Petersen presumed they were on a road trip until they got in a small accident. Upon running her plates, the cops discovered his mom was wanted for kidnapping. (Young Petersen was subsequently taken out of her care.)

That was the frightening moment he really became aware that she was different than other kids’ moms. “There were a lot of times living with my mom, [when] things would get very abstract very quickly,” he says. “For me, that was normal.”

Petersen and his grandparents once had to take his mother to the hospital because she had walked many miles to the ashram where she meditated, barefoot, convinced Petersen’s dad was waiting to marry her there. She casually chatted with herself all the time. “She’d start laughing, and I’d ask what she was laughing about, and she’d say, ‘Oh, nothing.’ When she told me Deanna Troi from Star Trek can read your mind…that kinda freaked me out.” Petersen laughs and adds that his mom only listened to Tracy Chapman, k.d. lang and Whitney Houston. “That was pretty solid.”

Though the subject matter in Torrey Pines is dark, Petersen’s sense of humor is palpably and cathartically present throughout the film. In one of the funniest scenes, his character attends a wordless Whitney Houston concert with his mom. It sounds like Whitney Houston singing through a pudding-filled kazoo.

Anyone with a mentally ill loved one likely relates to this necessary levity—like a surgical tool, its edge is meant for medicinal purposes, in a hand soft with sympathy and longing to assuage the pain of all affected. Petersen and his mother haven’t communicated in a while, but he hopes she’s doing okay. “She’s in assisted living. I think it’s a good scene for her. We weren’t quite on the same page anyway—I mean, I think she’s not really into queer shit. I’m not really stressed about not communicating with her. I just hope she’s living happily somewhere. I would like mental illness to be less stigmatized.”

Queer shit is addressed throughout Torrey Pines, which adeptly details the onset of Petersen’s struggle to make sense of his gender identity and sexuality as a young trans man. Given my comparable location on the gender spectrum, the resonance of the film’s queerness with me is hardly unlikely, but little paper Clyde’s revulsion to the closet of dresses his mom suggests he pack for his kidnapping revive the same nausea in me, and the same relief and gratitude when she accepts a suitcase of jeans. (Thanks, mom!)

I’ve never seen the horror of being misgendered captured on film so evocatively as in Torrey Pines—particularly a scene wherein, having witnessed his mom get out of the bathtub, Petersen imagines his 12-year-old body as an adult woman’s, with pendulous tits that spray milk grotesquely as he is buried in a pile of squirming babies. The awkwardness, the wrongness of the gender assigned him could make the straightest viewer barf.

“My transition has made me embrace doing exactly what I want to do, as far as art,” Petersen says. “I was just talking to my girlfriend—‘Should we make these temporary tattoos for the zine? They’re expensive.’ She said, ‘Just make it happen, who cares what it costs.’ Same with my gender identity—fuck it, let’s make it great. Putting yourself out there with your whole body is important—you need your body and mind to push your way through the bullshit of the world.”

And push he does. An average work day for Petersen begins at noon with a midday dip in his backyard inflatable pool, weather permitting, after which he continues to work until bed at 4 a.m. He has two ideas for future movies in the works, but in the near future he would like to explore a different medium.

“Ever ridden the haunted house ride at Disneyland?” he asks. “Pepper’s Ghosts—they look like holograms but they’re reflections of motorized dioramas on pieces of glass at a 45-degree angle. Disneyland currently has the largest in the world. If money was no object, I would definitely buy a warehouse, and build a bunch of crazy Pepper’s Ghosts.”

“My girlfriend and I are planning a diorama party,” I say.

“We could get some Plexi and make Pepper’s Ghosts out of the dioramas!” Petersen replies, with the inimitable smile of someone mentally pricing Plexiglas and the return of a rental truck after noon.