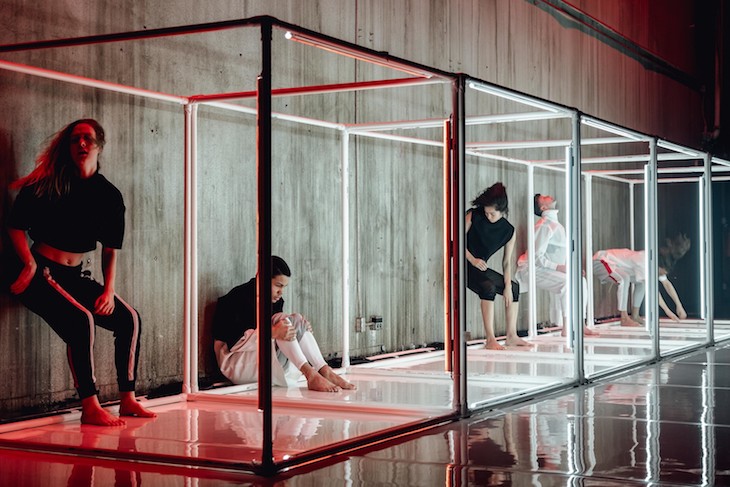 Seattle International Dance Festival’s June 13 performance took place in the intimate Erickson Theater off Broadway, in an area of the city formerly dotted with small theaters and artists’ residences. These days the theatre is nestled under towering condos, and last weekend’s  performance by Colemxn Pester’s Tectonic Marrow Society echoed the feelings of many longtime Seattle residents as they grapple with the changing identity of their city.

Pester has continued to develop PYLON III since its debut at Seattle Center’s Cornish Playhouse in February. Along with a change in the cast, Pester removed five monologues and altered the choreography to fit the more intimate venue, they said during a pre-show chat.

At the top of the show, two dancers dressed in white tunics resembling the clothing of old-timey apostates stood in the middle of large white cubes made of thin PVC pipes. Two dancers dressed in black took their places within the cubes and they began to move frantically, with different rhythms and movements, against the back wall of the stage. The dancers appeared trapped in the cubes and clawed at the ground as loud electronic music blared from the speakers.

In an interview for City Arts before the premiere of PYLON III, Pester explained that the piece originated from their internal battle with Seattle’s rapid changes in residential and social architecture that have dramatically impacted Capitol Hill’s creative residents. This theme is easily traceable throughout this iteration of PYLON III, if one imagines the PVC cubes as houses, then high-rises, with the dancers as a recognizable community trying to wriggle its way into a solid existence among newly arrived tech workers.

Gut-wrenching aesthetic established, PYLON III could do well to incorporate more of the technical talents of its cast, including Spectrum Dance Theater’s fantastic Robert Moore. In a section of the piece soundtracked only by the sound of dancers’ feet peeling off the floor, Moore crouches at the front of the stage, unfolding his body until his long legs and feet shoot out like arrows with such energy that the audience appeared to wake up in their seats before he crumples to the floor. It’s a spectacular choreographic moment in PYLON III, and more like it could give much-needed credence to its important social message and emotional depth. Is PYLON III effective in transmitting a message of social apocalypse? Yes. Is it pleasant to watch? No. And therein lies its success.

The second piece of the evening, Danses de Cygnes by Natascha Greenwalt’s Coriolis Dance company, is a feminist interpretation of classical ballet Swan Lake. In the original ballet, an absurdly violent story, a group of women is turned into swans by an evil magician who lets them roam in human form around a lake late at night. A prince on a swan-hunting expedition falls in love with one of the swan-women and agrees to marry her in an effort to break the magician’s spell but instead gets hastily and mistakenly married to another swan, thereby dooming all the swans to an eternity of feathers and Wonder Bread. For more than a hundred years, ballet fans have marveled at the beauty of this “love” story, but Coriolis turns the patriarchal power structure of Swan Lake on its head in a short, in-progress work set to the music of Tchaikovsky’s famous score, the band Zola Jesus and composer Kenji Bunch.

Danses des Cygnets’ five dancers, four female and one male, are dressed identically in short white shifts, their lower legs painted to look like the dark reeds lining a lakebed. Greenwalt’s choreography alternates between classical ballet vocabulary and simple but convincing abstract movements mimicking baby swans. Gentle violin music morphs into the sound of an egg cracking as a single dancer moves her arms and shoulders against an invisible barrier overhead, her body vibrating and shaking as she struggles to escape her invisible egg.

Thomas Phelan occasionally breaks his role as a cygnet to partner with Hannah Simmons. As he makes romantic advances and lifts her around the stage, she pushes him away and her sisters gather protectively around her. The Tchaikovsky and Bunch music, some recorded and some played live onstage by Dr. Julia Gish Salerno, complements the powerful messages of sisterhood and rejection of traditional male roles seen in classical ballet.

Just as that choreography and juxtaposition begin to establish an interesting theme, the music breaks into a loud recording of the powerful goth-rock artist Zola Jesus that overpowers the subtlety that gives Danses des Cygnets its power. This section could be its own ballet; the choreography, with all its big jumps and traveling leaps, presents its own statement about feminine power. But the classically-scored sections deserve more time and depth.

The dancing is universally brilliant. Each Coriolis performer has a unique interpretation of the movement so their artistic individuality is not lost onstage. This emphasis on personality stands in direct opposition to the classical presentation of Swan Lake, where the corps de ballet moves as a single body, technically beautiful but ultimately damaging to concepts of female individuality and power.