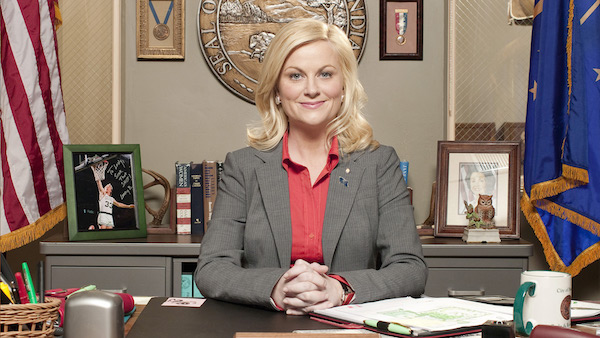 There’s never been a better time to binge Parks and Recreation.

Parks and Recreation, the TV series about small town government, concluded its triumphant seven-season run in February 2015. From Season 2 onward, nearly all of my friends relentlessly praised the show and practically begged me to watch it. I’d seen a couple episodes of the first season and wasn’t impressed. “It’s way better now!” my friends pleaded, to my shrugs of indifference. Even as the show racked up awards and accrued more cultural cachet with each new glowing think piece, I resisted. Around the time of the series finale, the state of Indiana itself—home of the fictional town of Pawnee, where the show is set—wrote a thank you letter to the cast and creators of the show. This thing was a big damn deal.

I finally started (and finished) watching it this month, and I don’t get to say this very often, but I was absolutely right to wait. I didn’t need Parks and Rec in 2010 or 2012. I needed it now.

I follow politics more than most people I know. I wouldn’t say I’m particularly civic-minded; I just find that kind of stuff entertaining. But about three weeks ago, something in my brain snapped. I think it was when Trump started to make significant gains on Clinton in the polls. All of a sudden, it wasn’t funny or interesting anymore. It was deeply depressing—not only because so many people are apparently willing to support an unabashed white supremacist authoritarian; the fact that so many people felt so much hatred for our first major-ticket, female presidential nominee stung even more.

Parks and Rec provided the perfect escape from the dark nonsense—soothing, hilarious and full of lovable characters trying to do the right thing. Many of the themes playing out on the show mirrored what was happening in real life. Watching the show was a way to deal with the disturbing implications of actual events through a buffer of satire and fan-service wish fulfillment. Here’s what I learned from my three-week Parks and Rec binge.

People can change for the better
When I started watching the show again in early September, I took everyone’s advice and started with Season 2. It took about four episodes for me to fall completely in love. After it was over, I was craving for more, so I started at the very beginning. It was like a gut punch.

From the second season onward, Amy Poehler’s Leslie Knope is depicted as overbearing, dorky and decidedly uncool, but she is unquestionably intelligent, hard-working (to an almost supernatural degree) and heroic in her dedication to bettering her home town. Her friends and co-workers are frequently exasperated by her pushiness, but their deep respect and adoration for her is never in question. (I have a friend who describes the show as “a big hug.”) Try watching six seasons of that and then go back to Season 1, where everyone in Pawnee seems to hate Knope—and so does the show itself.

Leslie Knope is the classic “first person to raise her hand in class” overachiever. It’s understandable that a TV show would hold up such a striver as a figure for mockery, but it’s also an obvious and easy characterization. It’s as though, after Season 1, the creators of Parks and Rec took a long look at this character and said, “Wait, why are we rooting against this person?”

I’m far from the first person to make this comparison, but Leslie Knope bears a great deal of resemblance to Hillary Clinton—both in her mannerisms and the way people react to her. She is, above all, a strong and competent person who is unwilling and unable to conform to a certain segment of society’s conception of what an acceptable woman is. She expects to be judged on her talents and her performance alone—an reasonable demand that almost nobody is willing to accommodate.

I find it bleak to the point of intolerable how Hillary Clinton’s average-for-an-equivalent-male-politician levels of political “availability” are somehow equated to Donald Trump’s insane litany of corruption and blasphemy. People simply want to hate her.

But just as the creators of Parks and Rec were able to step back and reassess their attitude toward Leslie Knope after the first season, I now believe it’s possible for people to take a close look at their attitudes towards assertive women and make a change for the better. Do I think that this will happen with Hillary in the next, crucial 30-some-odd days? Let me think—no.

Absurd is the new normal
Insanity in American politics has been the standard for the past, oh, 238 years. Cartoon levels of absurdity, however, are a relatively new phenomenon. As Leslie Knope climbs the political ladder, she finds herself matched up against some pretty ridiculous adversaries. Watching the show in the blessed years before Trump’s candidacy, characters like Paul Rudd’s impossibly dumb Bobby Newport would have seemed fanciful and wacky in this goofy satirical comedy. Nowadays, however, the idiots who square off against Leslie Knope feel as realistic as anything on The Wire.

When Knope is elected to City Council, her fellow council-members/sparring partners include a blatantly racist old man, an unrepentant serial philanderer and a crass, corrupt douchebag. These characters are all absurd and hilarious on their own, but if they were able to fuse together like some kind of nightmare Voltron, they would form Donald Trump, who proudly embodies all of these qualities.

And who, from this rogue’s gallery of garbage people, is the congressperson who gets recalled from office by popular demand? Trick question! It’s diligent, hard-working, non-racist Leslie Knope, of course.

In the end, political corruption and incompetence are enabled by the voters. Every town meeting in Parks and Rec is packed with a healthy mix of the loud and the ignorant. In one episode, a visitor from out of town witnesses a particularly embarrassing town hall event in horror, and Knope’s response is to beam with pride that nobody ended up throwing anything at them. It seems like a ridiculous exaggeration of community dynamics, until you watch footage of an actual Trump rally and realize that the show was pulling its punches.

It’s going to be okay
When you take a medium-view of history (somewhere between days and millennia), you find that, quite often, nations are able to work through even the direst of circumstances. On a micro-scale of this theory, we have Pawnee, Ind. As Leslie Knope fights against the forces of ignorance and corruption, we cringe and worry. But the people in the Parks and Recreation department need only to look at their own small town’s history on the grotesque murals in the hallways to see how far they have come. They might be seriously considering putting Gatorade in the water supply, but they’re no longer executing Native Americans by cannon fire at point-blank range.

This is another way in which Leslie Knope is an inspiration. She never accepts that because things are bad now, that’s they way they will always be. Nobody cares more than she does about being in public office. (In the episode where she wins her seat on the city council, her victory is treated like she’s basically won the presidency.) When all of her hard work is finally rejected by the small-minded voters, she shatters. And then she methodically picks up the pieces and gets back to work. Like Clinton.