Jay Friedman is a freelance food writer and gastronaut — global explorer of things gourmet and, well, not-so-gourmet. Born and raised in New York (and missing those back-east bagels), Jay says he came to Seattle in 1999 because “there’s great produce here.” He’s dabbled in classes at Cornell University’s School of Hotel Administration, taken cooking classes around the world, cooked as a Vermont inn-sitter, worked as a waiter, and evolved into an omnivoracious eater. Jay writes about the dining scene for Seattlest (he’s one of the food editors), is the Seattle Restaurant Examiner, and was the restaurant reviewer for Seattle’s Sound magazine — judging the monthly “Dish-Off” competition, which now appears in City Arts. When he’s not in his kitchen playing with a takoyaki grill pan, or one of his three woks and four waffle irons, Jay’s likely out searching for everything from chu-toro to chocolate — though most likely in a Chinese restaurant trying to order organ meats off the Chinese menu, or getting ideas on how to make better xiao long bao. 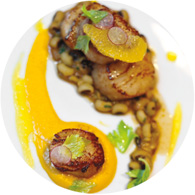 March 1, 2010
A pair of chefs prepares treats for the eyes. This month’s inspiration: “Blind Mary,” by Gnarls Barkley. Photography by Rina Jordan for City Arts. Chef Brian Cartenuto, who regaled us with talk of female genitalia during last month’s... 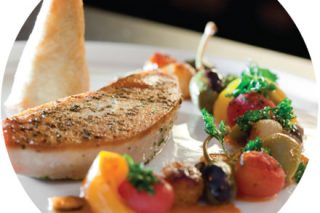 February 1, 2010
Avila v. Cantinetta Two chefs move fast to fuel a food fantasy. This month’s inspiration: “Little Red Corvette,” by Prince. Photography by Rina Jordan “On the verge of bein’ obscene” is how Prince describes his babe’s body in this 1982...
Feature 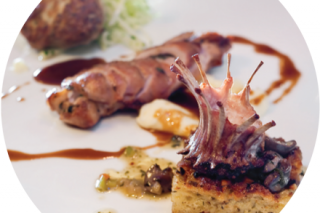 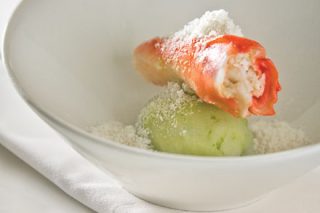 Dish-Off: Alone at the Top

December 4, 2009
Three Seattle chefs compete for the “Cooking Maestro” title by creating three delicious dishes inspired by songs of their own choosing. Over the course of this year, Dish-Off challenged chefs at twenty-eight restaurants to create dishes inspired... 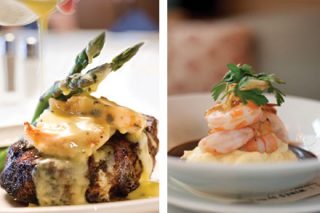 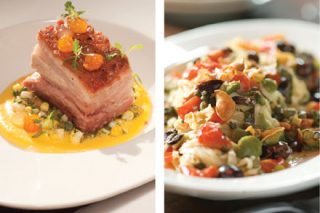 October 28, 2009
Nuts for Forbidden Fruits This month’s battle goes down in Belltown between Branzino chef and Top Chef: Las Vegas contestant Ashley Merriman and Spur’s Dana Tough and Brian McCracken, who are garnering rave reviews in local and national...