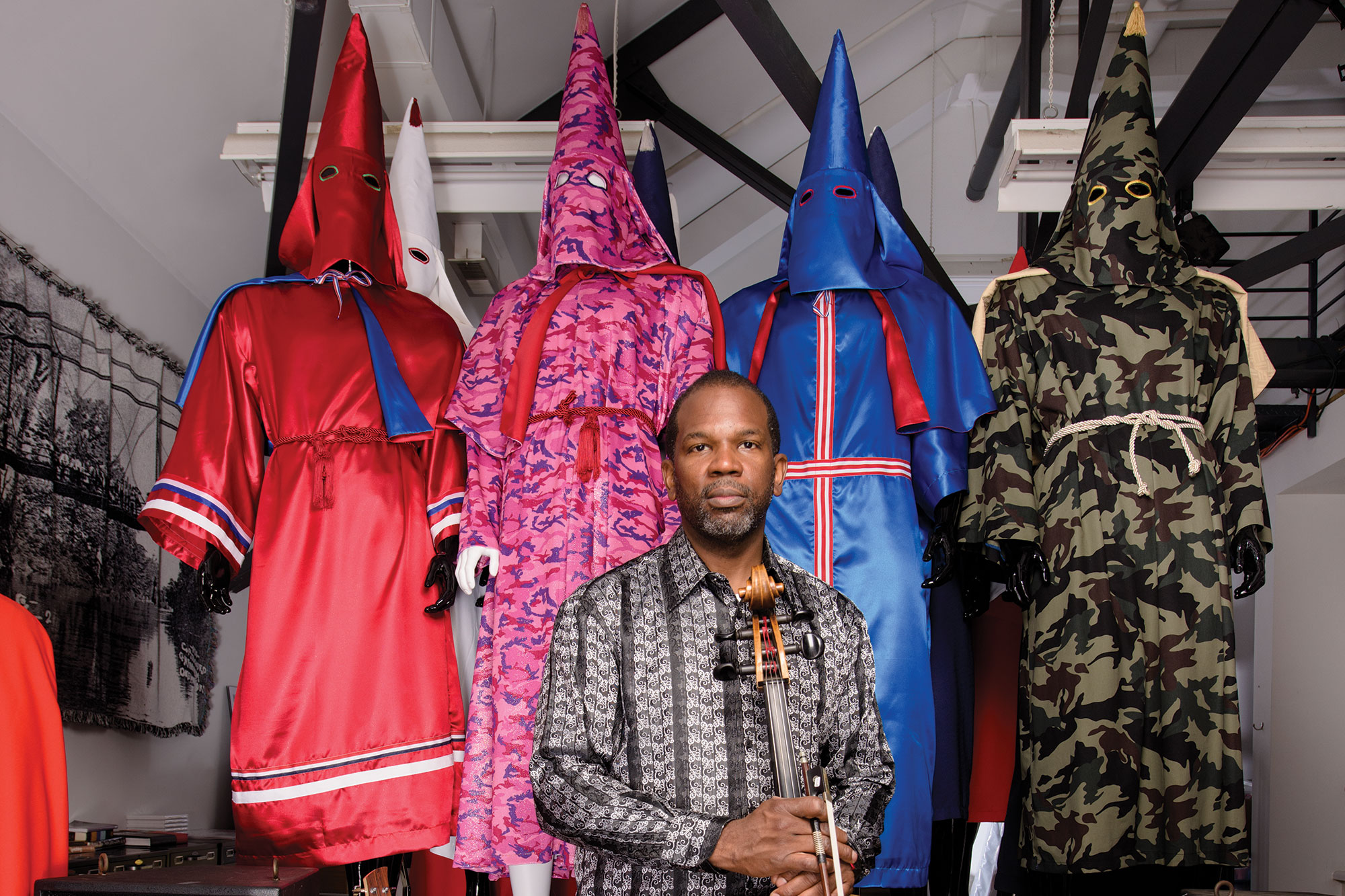 Paul Rucker’s REWIND exhibition inside the Visual and Sound Studio at Creative Alliance Visuals in Baltimore. Among many objects made for the exhibit, the artist and multi-instrumentalist created one new Ku Klux Klan robe every week for a year. Photo by Mike Morgan

Paul Rucker’s career is the stuff of American dreams. Self-made and self-styled, the internationally acclaimed artist has never taken a visual art class. He taught himself cello by busking in Occidental Square.

Rucker’s oeuvre spans many genres—musical composition, sculpture, video, installation—and ranges from abstract to political. No matter the medium, his work turns cold statistics into human stories, revealing the individuals behind our collective history. His art is as American as he is—though it focuses on the less romantic part of the national psyche: the slave trade, lynching and police brutality of the country’s past and present. In recent years he’s appropriated iconography to illuminate the abuse of citizens and their civil rights, re-imagining them in provocative, painful forms. His evolving, years-long project REWIND—a collection of art objects that examines race, class and power in America that has exhibited at Creative Alliance in Baltimore and Gallery 4Culture in Seattle—re-envisions historical events such as the 2012 killing of Trayvon Martin or the soaring membership of the Ku Klux Klan in the early 20th century.

In the 1920s Klan membership numbered more than five million, Rucker says. The town of Buckhead, Ga., kept 20,000 Klan robes on hand at all times and operated a factory to manufacture the nation’s supply of Klan garments and banners. Revising those garments as ready-to-wear items for the 21st century, Rucker recreated a collection of his own Klan-inspired robes, employing his sister-in-law to make hand-sewn versions from contemporary fabrics like camouflage and traditional African kente cloth.

For a piece titled “Excessive Use,” Rucker obtained a concealed weapons permit, purchased a Glock 22 semiautomatic pistol and fired bullets through sheets of archival paper targets. The bullet holes punched into each piece—he’s lost track of how many he’s made—correspond to the number of shots fired into a respective victim killed over the years by excessive police force.

“We are doing some of the same things over and over again,” Rucker says. “We need to identify the parallels between slavery and the present-day prison systems, between people being shot by police and lynching. The show isn’t about race in America, it’s about power—people protecting what they have regardless of how they got it.”

By Rucker’s own admission, REWIND is a divisive show. Its last iteration received more than 700 comment cards, mixed in response. That’s okay. Rucker doesn’t need anyone to like his work. Nothing about it means to be polite.

“When I became an artist is when I didn’t have to ask for permission or apologize for anything,” he says. “I wasn’t trying to prove anything. I just wanted to make this unseen thing seen.”

When Rucker first arrived in Seattle from South Carolina in the late ‘90s at age 30, his sole creative outlet was his double bass, which he’d played since elementary school. He’d burned out after years with symphony orchestras across the Southeastern states; in Seattle he took a break, gigging only occasionally for singer-songwriters. He was working as an usher at Benaroya Hall when someone there tipped him off about a janitorial job at Seattle Art Museum, which he took. He’d never heard of artists like Cindy Sherman, Chuck Close or Christian Marclay, but suddenly they were the company he found himself keeping for long hours at a time.

That same year, he also picked up a cello for the first time and developed his own unique, improvisational “prepared cello” style that integrates electronics and uses extended technique, such as slapping the body, playing pizzicato below the bridge and rolling the scratchy horsehair bow across the wood.

In 2006 he received a musical fellowship to go to Bellagio, Italy. There Rucker realized he wanted to experiment with visual information, curious about what might result if he added the potency of an image to the frisson-like connection of performance. “We haven’t figured out a way to measure the way people feel before coming into a performance and after, but that energy!” he says. “You can tell when someone is really present when you’re performing. If I combined visuals with music, how powerful would that be?”

Rucker embarked on a self-imposed schedule of 12 visual art shows in one year, in addition to the 40 musical performances he also played that year. It paid off: His autodidactic track proved unusually successful in the contemporary art world, generating a sophisticated and intuitive body of work with an unmistakable narrative. Rucker has earned art world heavy-hitter prizes like the Creative Capital Grant in 2012, a MAP Grant in 2014 and the Joan Mitchell Painters & Sculptors Grant in 2015. Last year he also received the Mary Sawyers Baker Prize, which landed REWIND a solo show at the Baltimore Museum of Art. The exhibit caught the attention of critics at publications like Huffington Post, ARTFORUM and the Washington Post.

“Music and visual art take me to places that no drug I’ve ever tried could take me,” Rucker says in a tone that’s at once wistful, dreamy and euphoric. On a gray day in late winter, he’s sitting at a table in Broadcast Coffee, a modest indie holdout in Seattle’s cafe-sphere. Located at 20th and Yesler, the café is a few blocks from the studio he’s rented for 18 years. The neighborhood is transforming, the street corner bustling with a steady scurry of pedestrians. Inside the café, patrons fog the windows with condensation.

Rucker is wearing a knitted black beanie, dark-rimmed glasses and has a slightly graying beard. His commanding figure and broad shoulders are softened by a graceful smile and a face that belies his gravitas. He just returned from Baltimore, where he’s been splitting his time since 2013, when the Maryland Institute College of Art Residency offered him a massive studio space in which to produce pieces for REWIND.

Rucker pulls up a website on his laptop that tracks the parcels of land slated for development all over Seattle. The immediate vicinity is besieged with construction-site markers, one of which is the reason for Rucker’s recent and likely indefinite return to the Northwest: a new mixed-use complex in the Central District, located on Spruce Street, just behind Washington Hall. The development will include 383 apartments (76 of them allocated for affordable housing) and 10,000 square feet of commercial space. Rucker has been hired to manage community engagement and site-specific arts programming for it. Unlike many of the ticky-tacky high-rises going up, this project aspires to a sense of built-in community by exhibiting privately funded public art in a park-like courtyard nested between its three towers. Rucker will oversee those art projects. Ground won’t be broken on the project until March 2017, but already Rucker is talking to community members about their needs.

“I live two blocks away from the place where this development is taking place,” he says. “I want to be at the table making decisions. I want to be a part of the change.”

“At the table” is part of Rucker’s mantra and he’ll have no part of being systematically excluded from the decision-making processes that often squeeze artists out of their own communities. He wants to carve out more spaces for artists, especially artists of color who are being forced from the homes and neighborhoods where their families have lived for generations.

He’s also adamant that many of the systemic problems rooted in unfair allocations of resources—including environmental racism (as evidenced recently in Flint, Mich.), decreasing human services for homeless populations or the disparity of opportunities offered in schools for children of color versus the privileged schools for white children—have always existed, broiling just below the surface.

“Baltimore has always seemed to me like a powder keg,” Rucker says. “There are a lot of people oppressed by the system. The houses aren’t worth as much; the inflation of housing value isn’t so exponential. In Baltimore you can’t deny the systemic problems because they are in your face. In Seattle not as much, but in many ways it’s more potent.”

Baltimore is majority black; issues of poverty, unemployment and gun violence are pronounced; there were 344 homicides last year, the highest rate per capita to date. Numbers like this have become the armatures upon which Rucker’s recent and current works are built. Pieces like “Excessive Use” bring the numbers to material life in ways even the most sophisticated data visualizations don’t.

Despite their elegance and loaded, informational poetics, such artworks risk remaining objects and signifiers with limited reach. Rucker insists on finding ways for artists to move beyond the object lesson and into the realm of the pragmatic: organizing after-school tutoring and mentoring, contributing to diversification by sitting on panels and applying for government positions, hiring ex-felons and students as assistants (Rucker himself does this frequently).

“Truth is far worse than fiction,” Rucker says. “Blacks getting picked up for crimes like loitering and being locked up and made to work. That happened up to World War II, up to then black kids as young as four were tried as adults. We’re still trying 12-year-olds as adults. We are the only country that incarcerates a 12-year-old for life in prison. How can art change this?”

Getting in bed with developers—rather than turning a blind eye and making a plaintive howl—is one way to connect artistic ideas with change. Rucker’s theory is being spun out in concrete. His energy is breathless, relentless—beyond the lip service of the conceptual, a call to action for a generation of artists poised to finally get serious about effecting change at home, in their neighborhoods.