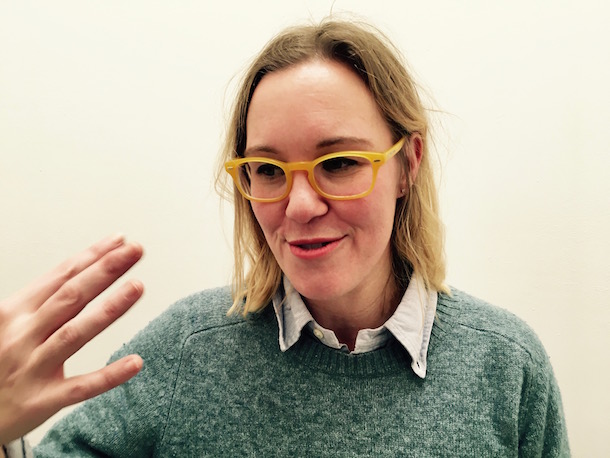 The first time I ever saw Dawn Cerny’s work, I laughed out loud and nearly sprayed my drink all over it. It was a close call.

This was about 15 years ago, and the artwork in question was a vast collage painting called “Accessories of an Eccentric Millionaire.” It was part of a series called The Artful Scheme of Happiness, wherein Cerny and a collaborator invented a 19th century tycoon and designed his entire life down to the smallest detail. It reminded me of The Simpsons in its prime: absurd, satirically incisive, historically inquisitive and deeply human. It also happened to be a giant, gorgeous, colorful canvas mounted on a wall.

Cerny has gone through a lot of creative phases since that time, as she’s exhibited her creations from Portland, Ore., to Venice, Italy. Her latest work is a collection of sculptures currently featured in Fun. No Fun, an installation commissioned by the Henry Art Gallery. It’s a collaboration with David Lipe, Matt Sellars and Dan Webb, a team of artists and architects who refer to themselves as Kraft Duntz, at least for the duration of this project. The collaboration is an inspired (and rather large) attempt to fuse art with the practicality of daily life and to expose invisible spaces and experiences that lie in plain sight.

Cerny’s contribution to this project is a series of sculptures inspired by her recent experiences as a mom. It’s like early Tim Burton meets Bob’s Burgers—a surreal, vividly colored journey into the sticky chaos of family life. The series is wonderful and hilarious, but also bracingly honest about the hidden corners of domestic life on a budget. Some of the sculptures have simple names (“Big Bird,” “Green Cabinet”), some not so much (“Lurk Murder—Ikea: Our First Nice Thing, Our First Fight in Ikea”). As Cerny showed me around the exhibition, we talked about comedy, fame and broken furniture.

Describe how your artistic process evolved to this point.
My initial interest was in reading, books. There’s a long narrative curiosity in the history of my work. I learned how to be a person through acting, a lot of theatre stuff. That taught me how to behave in a lot of ways. Once I started studying visual art, I realized [theatre] was a terrible idea, compared to just working by yourself as an artist, where you have all the control and nothing is compromised. And you also have this fantastic anonymity that I value. So I moved to Seattle, of course. [Laughs] As an introvert, it just seemed like the best place to be.

Damn right.
Right? And it continues to be in ways that I might be questioning now. So then I became very interested in installation, this idea of a body in space in relation to narrative forms. I did an installation at the Henry in 2008 called We’re all going to die (except for you). It was pretty heavy. It was so heavy that I decided that I was never going to do what I was doing ever again, and I went to grad school at Bard College on the East Coast to study sculpture—something that I had no relationship with at all—to see what would happen.

I ended up making things that…people were like, “We have no idea what you’re doing.” [Laughs] Since coming back to Seattle, I’ve been thinking more about performance and the body and trying to figure out how to make things here.

In [this gallery] are these objects that I made in collaboration with Kraft Duntz. We didn’t know what my part in that group was going to be at all—I was going to be writing a play or putting on some sort of musical or something like that, but then we started looking toward these sculptures as an in-between way to address space or evoke an idea of space or sensation of space. We all agreed that it would be good if we created this tumor-like thing where I could just go crazy. 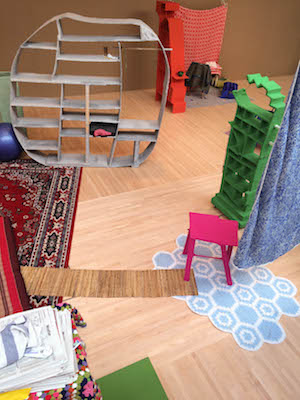 Tumor-like in that it keeps growing and growing?
Yeah, it’s a kind of deeply unsophisticated, almost scatological sense of madness. Like a cat lady household. In my world, this is actually how people live. And these are all designed to be like an archeological dig site that’s based on daily life, so this is a way to discuss—in an art critical context—the life of the home. Which is not good! It’s not intellectual, it’s not rigorous. I’m attempting to find this intellectual argument for finding out who keeps filling the brownie pan with water and why it keeps smelling. 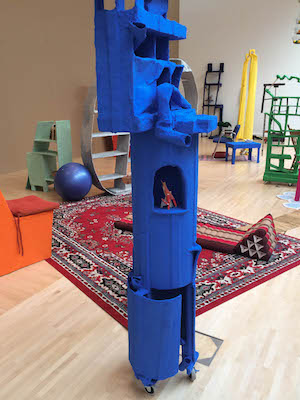 One of the things I’ve always liked about your art is that you fuse comedy and modern art in a pretty unique way—not something you see very often. Do you think that’s just a reflection of your own personality or is there a deliberate choice behind it?
It’s a definite reflection of how I cope with anxiety and trauma. I think my interest in comedy comes from a kind of mastery over a situation by rising above it—using things like surprise, egolessness, not being afraid to look bad. The kind of comedy that I’m most interested always has this kind of fearlessness, but also a love for humanity at the base of it. Because we all know what comedy looks like when it’s mean, right?

Punching down.
Right. When it’s being used to suppress. My interest is in trying to raise people up and translate a circumstance of oppression and ultimately finding connection and this idea of belonging. Because if you see your situation in somebody else’s situation there’s a kind of belonging there, and that belonging can’t help but turn into a kind of love. Which is the best! But comedians, as you well know, can be a pretty depressive, angry group, often not very respected—this is the thing about the clown; the clown is always the least respected person but the one who has all the liberty to say what they need to say.

Would you say that you formed your humor and your artistic ambitions concurrently? Did one come before the other?
It’s more embarrassing than that. It’s the compulsive nature toward self-preservation. I would notice in a lot of the things that I made or did this tendency toward comedy and also confession. So, I’m gonna confess something, be honest about something really difficult, and because that’s so much to put on another human being, I’m gonna use comedy as a kind of opiate to help swallow the bitter pill. This is going to sound strange, but there’s something about using a comedic architecture as a way of moving outside of a situation, to think about it differently—even if you’re not being funny.

Would you say that this interest in the forgotten articles of domesticity is influenced by your current domestic situation?
Oh yes, this is total therapy. Because nobody cares about houses. Nobody cares about moms. They’re not interesting. But they’re also the thing that’s most familiar to us. I’m trying to figure out this way of translating the knowledge of the home and the knowledge of the person who stays at home though this membrane of art without being preachy. The thing that brought all of us together, really, was this idea that these other jobs we had—carpentry for the guys, and myself working as a teacher or being a mom—our art practices were shaping the ways that we did our non-art jobs, and vice-versa. This project was a way for us to excavate those value systems and play them with each other and against each other. Like the display of rugs [in the piece]. How you put a rug so it feels like it’s where it should be, which is where it’s not where it should be because of the motions of everyday life? So there’s a kind of off-ness to everything in the display.

What’s the significance of the big hole in this shelf?
This is kind of like a half smile. It’s very animated and very funny. I’m really good at taking the value out of something—of everything that I do. There’s utterly no value in it, and therefore there’s a new value that takes place. It makes me smile.