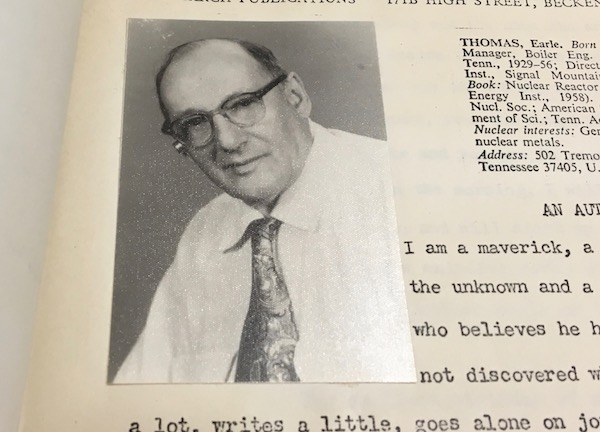 My grandmother handed me an old shoebox the day before she left Seattle to spend a few months with my aunt in North Dakota.

“You might like this since you’re a writer,” she said. “Did you know my father also liked to write? All of his old articles are in here if you’re interested.”

It was like she was casually handing me a box full of gold bars: “Eh, maybe you can find some use for this.” I knew virtually nothing about my great-grandfather. He died at the age of 86 several years before I was born. In old photos, he looked like a quintessential very old man: balding, spectacles, humongous hearing aid protruding from the side of his head. My mother didn’t have many stories about him because he had been estranged from the family for years; he came into her life on a marginal basis when she was 11. All I really knew was that he had existed, and eventually his existence led to me. And now I have a box jam-packed with his thoughts and feelings.

I’ve been going over his writings for a couple months now, and at this point, I feel like I know him better than many of my living relatives. His stories unlocked stories from my parents and grandmother. His unusual aphorisms and citations made me look into things like Turkish tobacco, the author Steward Edward White and the history of uranium. Eventually, I felt like I knew more about not just my own family’s history but about how people from his era thought and felt—some of which was heartening and relatable, and some quite uncomfortable.

Earle Thomas was born in Chattanooga in 1889, when Grover Cleveland was president. Or possibly Benjamin Harrison. This was 25 years before the onset of WWI. Four years after Ulysses S. Grant died. He was in his 60s when rock ’n’ roll was invented. He was a nuclear engineer, the Director of Atomic Energy at Signal Mountain, Tenn. When he took up writing in earnest in the late 1950s, he was already a retiree.

“I am a maverick, a nonconformist, an explorer of the unknown and a more or less obdurate hombre who believes he has a destiny to fulfill but has not discovered what or where it may be,” he writes in “An Autobiography,” the introduction to the black, paperbound collection that contains the bulk of his writing. Thomas saw himself as a thinker on the fringes of conventional thought, believed his ideas could help the world, and didn’t take himself too seriously (or at least wanted the reader to think such was the case). The collection is a fascinating jumble of scientific teachings, philosophical and political theory and ribald poetry. Yes, even in his 70s, my great-grandfather was—there’s no delicate way to put this—obsessed with sex. 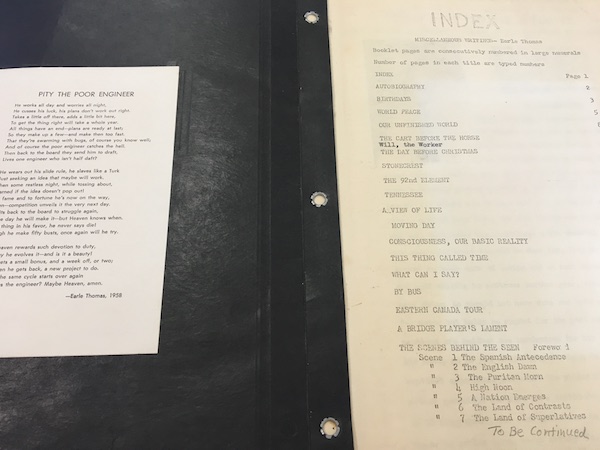 I’ll step right past the poem “Kitchen Kissin’,”which is somewhat self-explanatory, and dive into my favorite Earle Thomas piece by far. It’s called “For Ladies Only,” typed in blue ink on a thin, antiquated form of paper. It didn’t make the final collection, which tells me that Grampa Thomas (as my mom and her siblings called him) might’ve been a bit cagey about showing it to people—as well he should have been! It’s a short, humorous essay about how awful it must be to be a woman, putting up with terrible, unaccountable men.

“Husbands are of three varieties: prizes, surprises and consolation prizes. Making a husband of a man is one of the highest plastic arts known to civilization. It requires science, sculpture, common sense, faith and charity—mostly charity. It is a physiological marvel that a soft, fluffy, tender, violet-scented thing like a woman should enjoy kissing a big, awkward, and stubby chinned, tobacco-smelling and bay-rum-scented thing like a man.”

Every sentence in the four-paragraph poem contains something that today we might term “problematic,” but I see it as an exercise in empathy. Earle constantly says stuff that’s cringe-worthy and retrograde, but he also admits his own flaws and acknowledges that he’s not doing enough to help. The end of his most fascinating and brutal essay, “The Unwilling Team,” contains no shortage of racial dog-whistles. Written during the upheaval of the late 1960s, when he was a septuagenarian, it contains harsh remedies and proscriptions for disaffected Americans.

“At the recent General Assembly of the United Presbyterian Church a prayer was uttered containing the following words: ‘Forgive us for pretending to care for the poor when we do not like poor people nor want them in our houses.’ This is a wrong assumption; we do not dislike people because they are poor but because they are unnecessarily ignorant, needlessly dirty or triflingly lazy. There is no excuse for anyone in the U.S. being saddled with these self-afflictions, poverty does not bring them on, they bring on poverty.”

Yowza. Earle lived a life of accomplishment, which seems to have put him on what he felt was a higher level than some of his fellow men. But then again, this article was written not out of outrage, but out of what he believed to be enlightened concern. He speaks about the uselessness of riots and mass demonstrations and repeatedly asserts that hard work alone makes men transcend their limitations. It’s nothing you haven’t heard before from conservative pundits and politicians. But the essay ends on an amazing note:

“Both tryers and non-tryers will have to be pushed into teaming up for our great necessity and our only hope is to cure people. It is no overnight job and I am among the tryers who have not done very much about helping non-tryers. Who can help me?”

I disagree with a lot of Grampa Thomas’ politics, but I do see some of myself in him. At one point in “An Autobiography” (which slips between first and third person), he says, “His use of a hearing aid allows him to tune out most of the 90-percent useless talk that many people inflict upon those who will listen and he is sparing with words of his own. This makes him considered a bit unsocial but he is not disliked.” I may not use a hearing aid yet, but damned if I can’t relate to a lot of this—though I think “useless” is harsh and most of my friends would argue that I am not at all sparing with words.

What I love most about Earle’s writing is his engagement with the world, even at an advanced age. He still wants to see and touch everything life has to offer.

In “By Bus,” Earle recounts his journey across the country—you guessed it—by bus. Grampa Thomas happened upon Seattle during the World’s Fair in 1962, which he describes as “the most compact fair I ever visited.” He describes Seattle as a “wide-awake city” featuring “pedicabs pulled by husky young men, small electric cars for couples, shanks-mares [that means walking!] for individuals…overhead, gondolas crossed the area on a high cable.” I wish we still had gondolas. He talks a lot about the Space Needle, which was brand spanking new.

A piece in the collection also appears in the shoebox in the form of several small pamphlets. Entitled Move We Must, it’s about 5,000 words dedicated to a subject that must’ve been of particular interest to him at the time: the afterlife. Earle was a deeply religious man, but his beliefs seem governed more by his own philosophies rather than official doctrine. In his poem “What Can I Say,” he offers this semi-apology to God: “Thou knows I am not a praying man in its accepted sense, My language does not always suit Thy taste.” In Move We Must, he diagrams, with impressive certainty, his vision of the afterlife.

“The people you meet are as folksy as any you ever know, someone brings over what seems to be the coffee pot, another the cake that goes with it, some of your new neighbors show you the working of some new gadgets you never heard of before…But the most impressive of all the new things are the beautiful garments everyone wears—of what are they made? They radiate what seems to be a blend of color, aliveness and goodwill that perfectly harmonizes with the wearer’s personality and suddenly you notice that you are clothed with similar apparel that is so much a part of you as to be out of the category of dress—it is your inner self showing for all to see.”

It’s a fusion of science fiction and religious tradition, perfect for a man from the American frontier who helped usher in the nuclear age. Grampa Earle started writing too late to ever get very far with it; I’m one of probably only a few dozen people, mostly family members, who’ve read his work. But his writing has much more value than he ever could have imagined. He’s no longer a complete stranger to his great-grandson, who also fancies himself a writer.

But the truth is, I’d be eager to read this stuff even if Earle weren’t related to me, because it’s a part of history that few people have explored. I’m the first person in my generation to take this trip. The vast age difference between us makes some of Earle’s writing offensive to me in a way it wouldn’t have been to someone from his era, and I’m sure he’d have some things to say about the godless, profane content I produce. It’s not a conversation that can go both ways, but it’s a lot more than I had before. That’s the value of writing, and the reason to do it even if nobody is reading. Regardless of one’s artistry or the relatability of the stories one tells, writing illuminates a corner of history that nobody else can. Afterlife indeed.