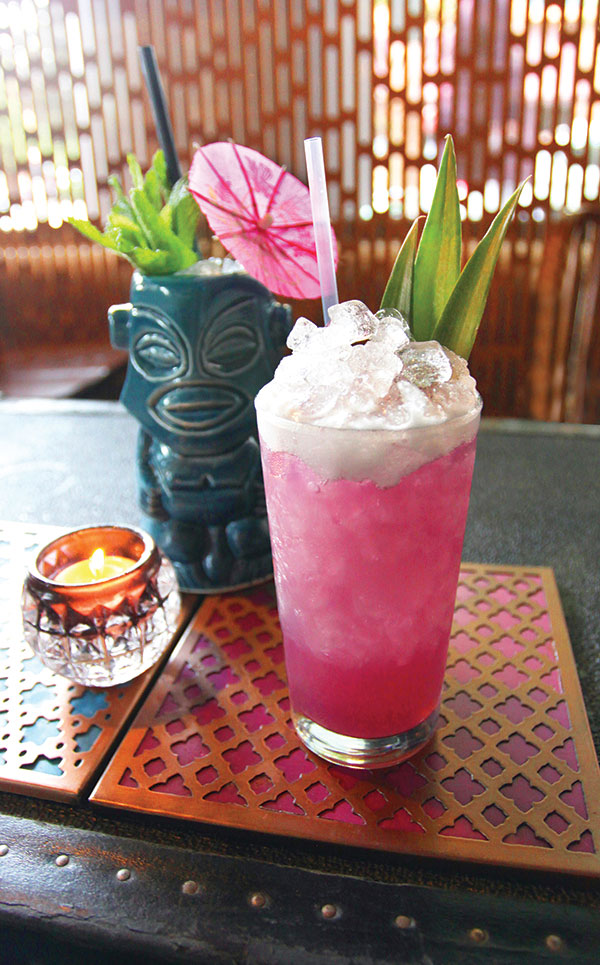 “The processes and techniques we use at Navy Strength are the same as any modern cocktail bar,” says owner Chris Elford, “but through a much more fun lens. We want to focus on the tropical aspect because that’s what we think Seattle needs.”

Enjoy Navy Strength, Seattle’s newest and smartest tiki bar, any way you like.

For a subculture rooted in all sorts of casual appropriations, tiki conjures a very specific set of images. So specific you’re probably already picturing them: Hawaiian shirts, carved wooden figurines, bamboo, thatch, “exotica” music, that folksy Trader Vic’s font. And, of course, blindingly strong rum drinks served in elaborate ceramic mugs with tiny parasols. Your typical tiki bar (always a tiki bar, never a tiki library or tiki gym) cranks these signifiers to 11, as if blasting customers into the kitschosphere is the only means of sending the message that hey, you’re on island time now. Have fun!

At this point, tiki has been run through the pop-culture revision machine so thoroughly that it’s been reduced to that simple guiding principal: Have fun. And just as there are endless ways to have fun, there are endless ways to tiki, none of them right or wrong. Soak up the fascinating historical and geographic trivia behind tiki culture or simply let the liquor carry you to some fantasy island. Rail against the colonial conquest that brought Westerners into contact with native South Pacific and Caribbean peoples or embrace the postmodern global economy that’s shrunk the world into a smartphone screen. Either way, sit down and have a drink first.

Navy Strength, the new tiki bar in Belltown, forges its own path entirely, one that circumvents kitsch to arrive at an of-the-moment refinement. The place establishes a totally original tiki-bar aesthetic, colorful but minimal, accessible but expert, exotic but authentic. Seattle is one of America’s great cocktail cities, but it’s never had a bar like this before.

The owners of Navy Strength, husband-and-wife team Anu and Chris Elford, also own long-loved craft-cocktail den Rob Roy and upstart weird-beer haven No Anchor, both nearby. These are people who’ve dedicated their adult lives to booze and bars, who first kindled their long-distance romance in tiki bars across the country, who’ve traveled all over the world as scholars of mixology.

Given their credentials, there was little chance that this new endeavor would fall flat. If anything, it’s even more impressive than it appears at first blush.

Yes, the menu offers tiki standards like the Zombie, the Fog Cutter, the Navy Grog and the Mai Tai. These rum-heavy drinks were canonized in the classic tiki era of the ’30s, ’40s and ’50s by the likes of Don the Beachcomber and Trader Vic, vagabond boozehounds and genteel opportunists who, over the decades, opened namesake tiki restaurants in hotel lobbies around the world. (Seattle’s own

Trader Vic’s, the second in the U.S. after the original in Oakland, opened downtown in the Benjamin Franklin Hotel in 1948, later moved to the Westin and closed in 1991.) Among them my favorite was an ancient obscurity named Dr. Funk, which Google says is named after the actual doctor who ministered Robert Louis Stevenson in Samoa. In Navy Strength’s hands, it carried a pleasantly nose-scrunching tang via a few different, very pungent types of rum, plus a whiff of citrus.

While Navy Strength skillfully delivers the oldies, they’re also intent on innovation. Under the “Tropical” section of the menu are a handful of concoctions devised by the house staff, inspired by the fruity/sweet/strong formula of tiki but centered on spirits other than rum. I could smell the mezcal in my friend’s cocktail from across the table, and if that weren’t appealing enough, his drink was a vivid purple hue, so I ordered the same. El Perro Grande, as it’s called, hits up front with the wild smoke of mezcal before following with a cornucopia of fruit flavors, piquant but not overly sweet. The color comes from butterfly pea flower, which has long been used to impart a natural blue tint to foods and drinks in Southeast Asia. In this case, Navy Strength infuses mezcal with the flower; added citrus kicks the color into grape-lollipop territory. This is a cocktail to ignite a romance: rich with background, luscious in appearance and positively haunting in flavor. I had two.

Other far-flung cocktail ingredients at Navy Strength appear in the “Travel” section of the menu. Popular in India, kokum is a tiny, tart forest fruit, and jal-jeera is a refreshing, cumin-and-ginger spiced beverage. Here they’re mixed into cocktails that riff on the flavors of Anu’s parents’ homeland; these are the bar’s most original and, according to Chris, most popular drinks. The Travel section will change every six months, with Japan, Central America and the Caribbean on deck—all places where Elfords have immersed themselves, interfacing with local producers, epicures and bar owners. Unlike tikiphiles of earlier generations, the Elfords are less plunderers than archaeologists, studying far-flung locales and bringing home their favorite flavors and styles to share.