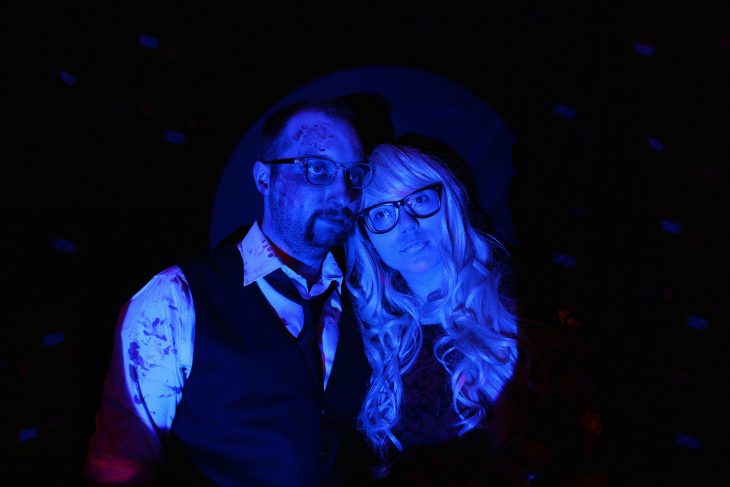 Cock & Swan don’t get out much. Rather than spend time performing live and potentially deflating their mystique, the noirish electro-pop duo meticulously shapes their recordings and cultivates their image through music videos and creative collaborations. Last year they collaborated with Kate Wallich and the YC for the modern dance performance Splurge Land (and we premiered the video for their song “See Through Me,” which spotlighted dancers Wallich and Lavinia Vago). Today we’re premiering their latest, “Flock Descending,” a video directed and produced by Cock & Swan that actually features the band members themselves—albeit a gruesome version.

“A video is like talking with someone alone in their room, a show is like trying to have a conversation with a group of people at a party,” singer Ola Hungerford writes of the band’s reclusive nature. “We’re more interested in the one-on-one interaction.”

Describing the eerie, dreamlike video, drummer/producer Johnny Goss writes, “We want it to feel like nothing happens while the details are moving and changing.”

“Our goal was for something slow moving with a hint of claustrophobia,” Hungerford adds.

The video for “Flock Descending” riffs on Nicolas Winding Refn’s 2013 thriller Only God Forgives. The song is taken from their recently released album, Dream Alone—Cock & Swan’s original score for Only God Forgives, which they performed in 2015 as part of Northwest Film Forum’s Puget Soundtrack series and later recorded for release.

They’re hosting a listening party of the score during a viewing of the film on Jan. 17, 2018. But you can get in the sinister, bloodletting mood early by watching the video below.