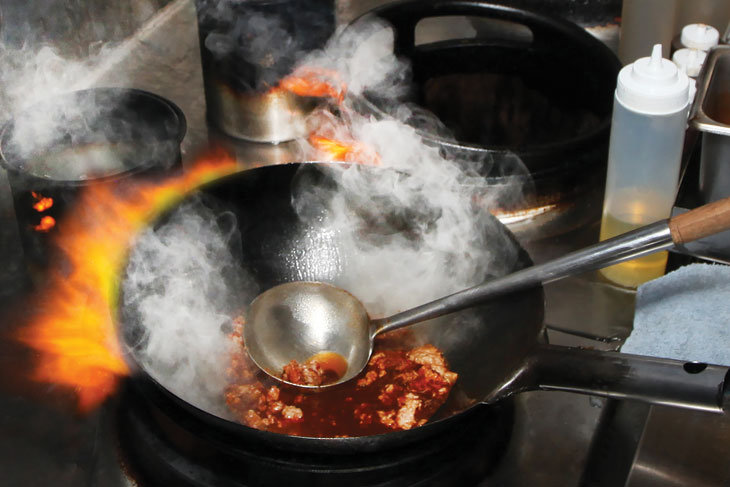 Travis Post slides a plastic soup container across the table. Inside sits a pile of small black seeds, shell-shaped with a barnacle-like green coating. They smell like citrus and pine resin. I toss one past my lips. My mouth begins to salivate intensely.

I take a sip of water. It tastes salty. Compulsively, I turn my tongue over, licking the inner contours of my cheeks. The burning feeling doesn’t go away.

The tiny morsel responsible for this sense-shifting experience is hua jiao, a plant of the Zanthoxylum genus most commonly known in English as the Sichuan peppercorn. This delicate berry—which, botanically, is a citrus—underpins the cuisine at Post’s new Capitol Hill restaurant, Plenty of Clouds, which he runs with his wife, Lisa.

This numbing raw berry is not in any of the restaurant’s dishes, but it is served cooked in a custom wok range for dishes like “not your ma-po’s tofu” and “ma-la chicken legs,” and served with cucumber to cool the burn. Once nearly impossible to get in the U.S. due to agricultural restrictions, their top-quality peppercorns come from a mother-daughter Chinese American specialty importer in Nashville.

“People have asked me if they’re having an allergic reaction,” Lisa tells me on a September weekday afternoon. Produce deliveries arrive in a steady stream as The Clash and Sex Pistols play in the background. “Your body reacts to Sichuan peppercorn the same way it does to an electric impulse,” she explains. A 2013 scientific study credited the berry’s bioactive component, sanshool, with causing a lip vibration equivalent to 50 hertz. “I used to joke it’s like licking a battery, but in a way, that’s really what’s happening.”

Plenty of Clouds specializes in the cuisine of two neighboring provinces, Sichuan and Yunnan; the former known for its spiciness, the latter a hard-to-characterize mix of ethnic cooking traditions united by fresh produce and cured meats. The restaurant’s name is a portmanteau: Sichuan is known as “the land of plenty” and Yunnan means “below the clouds.” My wife and I found a suitably cloudy late-summer evening to taste a few dishes on the restaurant’s 15th Avenue sidewalk patio.

The sour funk of fermentation permeated our meal, from crunchy green tomatoes to lamb meatballs tossed with fermented pimento. A chewy mushroom rice cake satisfied our starch carving. And the ma-po tofu provided an appropriate twinge of numbing spice.

“There’s a lot more subtlety than people are led to believe [in Sichuan cooking],” Lisa says. “I don’t think it’s fun to not be able to taste your food because it’s so spicy.”

We began with a shot of baijiu—a Chinese liquor not for the faint of heart—served in an impossibly cute 2-ounce dollhouse goblet and followed up with a turmeric gin cocktail that showed a refreshing balance despite coming out the color of Tang.

In matching blue T-shirts, Travis worked the open kitchen and Lisa served us. Despite their location on a prime corner in a trendy neighborhood, they’ve kept the menu affordable, with no item topping $14.

Plenty of Clouds’ arrival on the Hill ends a saga that stretches from New York to Seattle via China, where the mid-30s couple fell in love with a cuisine. Travis and Lisa met in New York’s high-octane restaurant industry; he was a cook, she a restaurant manager. In 2012, Chinese American restaurateur Erika Chou recruited the pair to open Yunnan Kitchen in the Lower East Side.

Travis received a cursory introduction to Chinese cooking in his training at the Culinary Institute of America. At Yunnan Kitchen, he delved deeper into the regional cuisine’s idiosyncrasies, from its prominent mushrooms to its charcuterie-like dried meats, and enjoyed his maiden trip to China, with culinary research stops in Beijing, Shanghai, and of course, Yunnan.

A year at Yunnan Kitchen convinced the couple they wanted to open their own restaurant, a financial impossibility in New York. They began hatching an escape plan and Seattle ended up at the top of their list—more affordable and livable, but with a discerning food scene where Plenty of Clouds could thrive.

In 2014 they left their Brooklyn apartment behind and prepared to travel together to China for a consulting gig with Uncle Sam’s, a now-defunct Chinese burger chain that hired them mostly to give its Beijing launch a veneer of American authenticity.

Their contract complete, they embarked on a month of independent culinary research. It was Lisa’s first trip to China, a chance for her to see and taste what Travis had shared via WeChat messages on his last visit. Handmade noodles shaved directly into a wok, tiny mandarin oranges, and tear-inducing spicy hot pot were among the highlights.

“There is no amount of dumplings from a street vendor I won’t eat,” Lisa says.

In April 2015 they arrived in Seattle with nowhere to live, but quickly settled in Ballard and oriented themselves within the local food and creative scene. They met menu artist Dozfy, who used one of Lisa’s Chengdu photos to draw a panda on a paper fan that’s now pinned to the wall above the bar, framing a 54-seat establishment in an inviting blue-and-gold motif.

When asked whether a white couple with an all-white staff running a Chinese restaurant constitutes cultural appropriation, they don’t get defensive. It’s been a recurring motif since their July opening, an inescapable question in an era when, for example, Portland has a database of culturally appropriative restaurants.

“We’re not trying to be the ambassadors of this cuisine,” Travis says. “I understand the argument of something being exploitative, Disneyfied or whitewashed. The most important thing is being respectful.”

Reactions to the restaurant have been largely positive. There are a handful of Sichuan eateries in greater Seattle, but no Yunnanese restaurants. At least once a week, a customer will thank them for a taste of home. “I want to cook the food I want to eat,” Travis says. “Every day.”