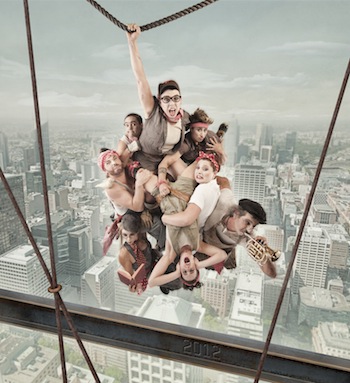 What do a circus troupe and a garage rock band have in common? According to Mike Finch, artistic director for Australia’s Circus OZ, absolutely everything. Finch dreamed of joining Circus OZ, (that’s OZ as in “Ozzie,” as in “Australia’s national circus”) since he was 12 and his mum and dad came home raving about seeing a man walk across the ceiling. Finch talked to me about Australian irreverence, authenticity, Cirque du Soleil and the dawning of commercialized teeny-bopper circus.

How would you describe Circus OZ?
We have a word called “larikkin,” which is sort of cheeky and subversive. If there was a crowd of people and there was someone making a horribly earnest speech, the larikkin would be the one at the back heckling funny heckles that made the rest of the crowd laugh. It goes back to our convict past I’m sure—our convict ancestry combined with the incredible humor of the Australian indigenous people, which is inherently cheeky and funny as well.

There’s also a tall poppy syndrome: Anybody who sticks their head up too high and gets too full of themselves gets taken down a peg, but in a good-humored way. It’s a really egalitarian company, there’s no star of the show. It’s more of a big rock band of 14 people.

Many of the performers are also in the band and also do the rigging for the show. Does having a small group of people who do everything spring from practicality or a sense of circus tradition?
It’s both. Some is traditional circus where everyone does everything—you see the person who’s the catcher on the flying trapeze is selling the popcorn and they’re also putting up the tent and driving the truck. All of that is part of the culture of the company, but it’s been turned into an artistic aesthetic that we’re proud of. It’s part of the joy of the show. That the audience gets to meet the performers in pre-show when they’re mingling with the crowd and then they’ll be watching an individual character, maybe someone they’ve connected with, and go “Oh my goodness she plays trumpet but she also juggles but she’s also in that acrobatic thing and there she is on the bike.”

There’s something political about that as well. Children and young adults go, “What am I going to do with my life?” They’re shown something that isn’t pigeonholed. The performers are ordinary people. There’s certainly not a Cirque du Soleil aesthetic of masks and makeup and people hidden behind character. It really is like watching a rock band—because you’re seeing the real people.

Do you feel that circus has entered mainstream culture?
Companies like Cirque du Soleil have pushed it into a world that’s a cross between Disney and ballet. They’ve made it something that’s being mass-produced, pushed out to massive audiences all around the world. We’re in the phase rock music was in as it moved out of the ’70s into the ’80s, when it becomes commercialized, when the control of the art moves away form the individual performer.

Is that connection what helps differentiate good circus from great circus?
Circus is one of the last art forms where the performers control the means of production. In a show like [Teatro] Zinzanni you see a specialty act—and it may have been re-themed to fit with a show, or re-costumed, but you still see the person who spent eight years making the act right. It can’t be replicated.

There’s something about the authenticity for me that makes it real and that outweighs a whole lot of other things in the circus. A lot of people would prefer a generic show they could see in New York or London or Paris. That’s something we’ve always resisted—cloning a show or creating a show that’s locked in. We change it each time we perform it. My job as director is more like curating an art exhibition for 14 artists rather than make sure everyone sticks to the script, because there isn’t a script.

Circus is constantly evolving and incorporating other art forms. What do you think is the future of circus?
Circus goes through waves. Traditional circus apparatuses—trapeze or juggling clubs or juggling balls even—were innovations at some point in history. What’s happened lately is combining those things in unusual combinations and bringing all sorts of angles into it—dance, extreme sports. From the beginning in Circus OZ, a big part of the company was innovation with gear. It’s the idea of engineering unusual ways of using equipment together with people. So in this current show we have a giant steel beam, a bit like a girder on a construction site. The whole show is set on a construction site—so this girder comes in from the ceiling and then is used to swing on, climb on, roller blade off it.

The thing about circus is anything goes, just not everything works. It’s about suspension of disbelief. The audience doesn’t have to pretend that your ballet dancer is flying in the air; she actually is in the air, hanging off a rope. When you combine theatre and circus together, when you put suspension of disbelief together with something that can’t be faked, it can become incredibly powerful because you get a visceral response to it.

What is the premise of the current show?
It’s called From the Ground Up and it’s set on a building site. It’s also a metaphor for building Australia from the ground up and the idea of cultural diversity, which is always the underlying metaphor of circus. It takes all kinds of bodies and people to do something extraordinary like build a big human pyramid or do a group acrobatics act. You need small people and big people and funny people and clever people and quiet people and obsessive-compulsive people. When you mix it in with women and men, and with indigenous Australians, you literally see a metaphor for how the world would be if people could collaborate or cooperate or work together. So it’s a hope for the future, of what the world might be like if we get this century together. On the other hand it’s just a silly circus show.