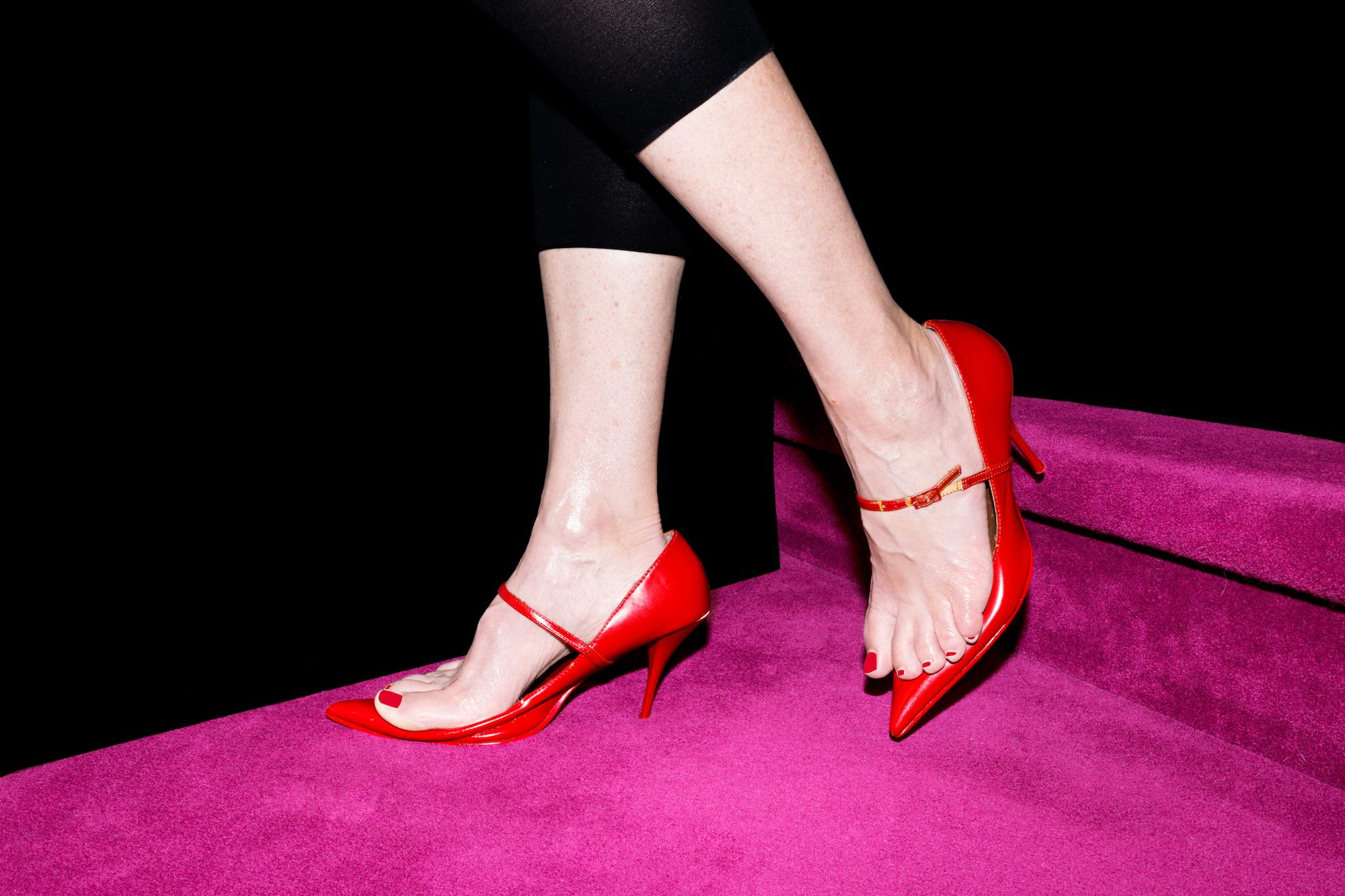 “In the West, since Antiquity, colour has been systematically marginalized, reviled, diminished and degraded,” wrote Scottish artist David Batchelor in his 2000 book Chromophobia. The title referred to a fear of color that, per Batchelor’s diagnosis, plagues Western culture. Batchelor’s claim that color others the feminine and the cosmetic left a deep impact on Natalie Krick, and although the Seattle-based photographer rarely wears color—when we meet at Glassbox Gallery on the fringe of Pioneer Square, her outfit is black on brown—it’s safe to say she is no chromophobe.

In Krick’s images, color is a character of its own. It appears as orchid-pink paint on a woman’s naked body, her nipples obscured by two round cut-outs of collaged blue sky; or hot-red nail-polished feet trampling red lacquered shoes on fuchsia carpet; or the green of Krick’s parents’ garden clashing with her the yellow wall that backdrops a portrait of herself and her mother entangled in an embrace.

Krick’s alluring photos appropriate the slick, cosmetic glamour of advertising and fashion photography to question and play with clichés of femininity, and they’ve struck a chord. She won the 2017 Aperture Portfolio Prize for her series “Natural Deceptions” and recently published a book of the same name, her first, and showed the series in New York.

Now, Seattle gets a chance to see the work during Apocalypstick, an exhibition opening this Thursday at Glassbox, in which she combines photos from the series “Natural Deceptions” and “How She Got Her Body Back.”

“I named the exhibition after a chapter in Chromophobia,” Krick explains.  “Apocalypse means ‘uncovering,’ while lipstick is a cover-up. That’s something I’m playing with: covering and uncovering.”

She points out a series of three photos wherein cut-outs of bright blue pool water are layered onto a model, obscuring her face and body, leaving only a silhouette of hips, head and hair. “A friend of mine thought this was a picture of Beyonce,” laughs Krick. “It’s not. These photos are about the body, and how it’s posed. I wanted the viewer to focus on how the body is reduced to shapes.”

You often use collage techniques to make the bodies of your models artificially thinner by removing flesh or painting parts of their bodies. Why is that?

It references this idea of taking up less space, and how that’s sold to us as this ideal of beauty. In one photo, I gave myself a DIY thigh gap by holding a piece of paper that’s made to look like the wood of the panels behind me. First you might believe that’s the way the body looks. When you come closer, you think it’s a shitty Photoshop job. And then you realize it’s a piece of paper on the body. The hand gesture refers to the Venus Pudica, a famous performative gesture of the Venus in historical paintings. There’s this duality to it. It looks like a modest and masturbatory gesture.

Why did you put on those fake French-tip nails?

While making this work, I was collecting these artificial things used to beautify the body: fake nails, eyelashes. There’s something so strange about covering your nails with nails that are a perfect version of what a nail could be. I named the series after the nail’s brand, Natural Deceptions.

Your newer series is called “How She Got Her Body Back.” Where does that title come from?

It was this little tabloid headline about Britney Spears and how she “got her body back” after having one of her kids. Removed from the context, those words are very strange together. I often take pictures of tabloids at the grocery store with my iPhone. The wording is often very weird.

The bright flash of the tabloid pictures reminds me of the light and flash in your work. How do you see that?

There’s this connotation to flash, the idea that it lends a moment a veracity. Like it’s a snapshot you took of something that just happened right there. It seems more spontaneous, even though none of my photos are spontaneous at all—I actually spend quite a bit of time planning, styling, photographing and then working on them in post-production.

Constructed spontaneity is a large part of today’s photography on Instagram. You reference the platform’s censorship of nipples in a recent work, and your bright millennial pink and popping colors fit its aesthetics. How do you see your work in relationship to today’s image culture?

The color is important to attract attention; it’s an active tool of seduction. I’m really attracted to artifice. It’s seen as superficial, but that doesn’t mean there’s no substance. People put a lot of thought into the way they present themselves to the world. It’s fascinating how these ideas about portraiture have shifted. I grew up in an image culture of mostly magazines. When I was studying photography, Instagram was around, but I wasn’t really involved in it. I think the term “selfie” was coined after I graduated. When I was photographing my mother, she didn’t have a smartphone, so she wasn’t photographing herself as much as she does now, which is really interesting to me.

How did you start photographing your mother and sister?

I’ve always photographed my sister—she’s been an important model since I started studying photography 10 years ago. Later, during my time at Columbia College Chicago, I was photographing women I found on Craigslist. I’d go over to their apartments and bring wigs, make-up, fake eyelashes and do a whole make-over. Those portraits were really deceptive, a performance of gender. When my mother came to visit me one day, I asked to photograph her. I immediately knew: This is interesting.

Historically, in fashion and pin-up photography, it was a male photographer directing a younger woman. Here, it’s you photographing your mother in slightly risqué poses. What was your thought process?

I definitely played with the idea of who is photographing whom and with the idea of age and beauty standards. But these photos are not sexual pictures of my mom—sexuality is way too complicated to show in one picture. So it’s more about photography, and the performance of it, than sexuality. Then again, photography often influences what we think about sexuality and what we consider sexy. It’s all tied together.

Apocalypstick runs from April 5 to May 12 at Glassbox Gallery.