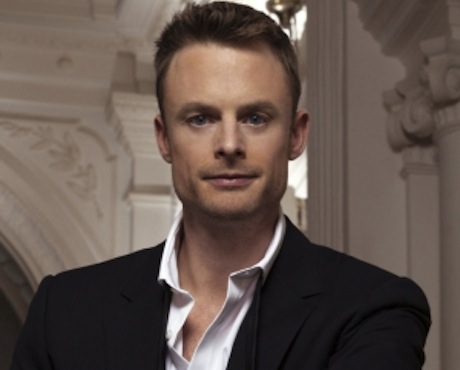 This Friday, Seattle dance history will be made when the curtain rises on Pacific Northwest Ballet’s final program of its 40th anniversary season. One of three works on the program is a long-awaited world premiere by choreographer Christopher Wheeldon, whose talents are sought after by major ballet companies around the world. Outside of dance, Wheeldon, a native Briton, may be best known for his work on the closing ceremony of last year’s London Olympics.

A day after completing his latest ballet, entitled Tide Harmonic, Wheeldon talked to City Arts about it and his experience working with PNB, a collaboration that took several years to happen.

City Arts: Where have you found inspiration for the work you’re making for PNB?
Christopher Wheeldon: Mostly in the music. It’s a piece of music by English composer Joby Talbot called Tide Harmonic. It’s written with water as inspiration. I figured that since Seattle is a very water-based city that that would be a good starting point—although it’s not really about water per se. There are moments of choreography that are inspired by the pulling of the tides, but you wouldn’t necessarily watch the ballet and say, “Oh, it’s a ballet about water.”

How is PNB influencing the work?
PNB’s dancers are creative. Very quickly they’ve understood the kind of movement vocabulary I’m looking for with this piece. Because of time, I’ve had to be very fast about making decisions and getting material down. We just finished the piece yesterday [after only two weeks of working]. It’s been a very quick creative process. Now we’ve got a little bit of time to smooth out the rough edges and make some alterations. I think you make ballets according to the amount of time you have. If you’ve got three weeks, you make it in three weeks. If you’ve got six weeks, you make it in six weeks. It doesn’t necessarily mean that the outcome is going to be any more spectacular if you have more time.

Though this is your first commission from PNB, you’ve been working with the company now since 2006.  What are the most important ingredients for a long-term, successful collaboration?
Patience is one of them for sure. Peter [Boal] has been very supportive and very patient.  He’s waited a long time for a new piece, which I really appreciate. He’s asked and I said, “I can’t.”  And he asked again, and I said, “I can’t.” And asked again—mostly because of time and because of the way the season falls here.

Peter’s very good and gracious at allowing the artist to come in and follow his own ideas. He doesn’t come into the studio or dictate any sort of parameters at the beginning. It’s pretty much carte blanche, allowing you to follow whatever inspires you at the time.

You’re known for a willingness to experiment. What fuels this approach?
For me, ballet acts as a very, very robust framework, and then it’s finding ways to use that vocabulary. There are those who would say there’s no need to futz with it, but there are so many ways to combine a more contemporary sensibility with a traditional art form. I love that in architecture. I always love when old buildings are taken and given a new life. It’s one thing to sort of preserve and renovate a building, but another thing to take it and make it of today. It’s a little bit like that with classical ballet for me.

Now that you’re Artistic Associate with the Royal Ballet, is that the place you call home in your work-life?
I guess yes.  London now has taken precedence over New York, although I haven’t been in either city very much this year at all. If time spent in a place dictates that [where you call home in your work-life], then, yes, it’s London. London is the only place that I hold a position.

How often are you on the road?
I’m on the road quite a lot. I’ve probably been home three and a half weeks maximum since January.

What does the rest of the year have in store?
New York City Ballet are reviving Carnival of the Animals in the fall. Royal Ballet are going to Japan in July with Alice [Alice’s Adventures in Wonderland]. I’m going with that. That’s the first time they’re taking it on tour, so that’s a big deal. I’ll be there for that.

The rest of the summer, I have a musical theater project that I’m developing, but can’t really talk about. We’ve got a reading in June and a workshop, potentially, in the late fall. That’s going to take a large chunk of my summertime.

PNB’s “Director’s Choice” program will run at McCaw Hall this Friday and Saturday at 7:30 p.m. and June 6-8.  Matinees are Saturday, June 1 at 2 p.m. and Sunday, June 9 at 1 p.m.  In addition to Christopher Wheeldon’s Tide Harmonic, the program will include George Balanchine’s Agon and Diamonds.