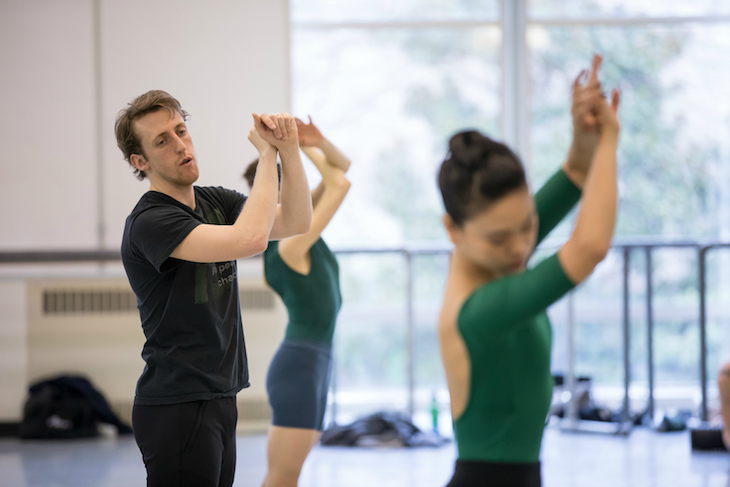 Ezra Thomson loves to work with his hands: woodworking, repairing cars, cooking from scratch. It seems somewhat ironic then, that the flipside of Thomson’s creativity explores the fleeting, intangible medium of movement through his work as a choreographer and soloist with Pacific Northwest Ballet. “It all comes down to creation and creativity,” he says. “Whether I’m choreographing or making a physical object, in both cases it’s an act of creation.”

Opening Friday, March 16, PNB’s annual Director’s Choice program includes the world premiere of Thomson’s The Perpetual State, a contemporary piece that digs into the emotional peaks and valleys that come with great personal loss. Thomson’s work is joined by work from global heavy-hitters William Forsythe and Ulysses Dove, whose piece Red Angels is a particular audience favorite. We chatted with Thomson between rehearsals about his first forays into creating dance works and what we can expect from his latest work.

You’ve been dancing since you were little, but how did you pivot into choreography?
When I was 15 I moved to Orlando to go to study at the Orlando Ballet School. About a year into that a teacher asked if I would be interested in choreographing some solos for the Youth American Grand Prix [a prestigious annual international dance competition that culminates in New York]. I created a solo for one girl and I found that I really enjoyed the process, so the next year when I was asked again I jumped at the opportunity. When I came to PNB I got involved in the NEXT STEP program, which allows company members to choreograph work for higher-level students. That was the real work I did. Since then I’ve choreographed at least six pieces for PNB and I’ve made work for both Spectrum Dance Theatre and the Massive Monkees for the Seattle International Dance Festival.

Tell me about The Perpetual State.
My dad died three years ago, and at his memorial service I ran into a childhood friend whose dad had died when he was 12. At one point I asked, “Does this feeling go away? Does it ever feel better?” He just looked at me and said, “No, it becomes part of you.” That’s where I got this idea of a perpetual state, but I didn’t want the piece to only be a morbid, sad, death piece so I also looked at the opposite side of that, the feelings you experience when you’re in love with someone. I recently got married so I was thinking about my wife a lot throughout this process.

What is the movement like?
This is always a tough question; it’s hard to describe. It’s not straight classical ballet and it’s not modern. I would say it’s contemporary, neo-classical ballet-based movement.

The music [Francis Poulenc’s Concerto for Two Pianos and Orchestra in D minor] is a mix of frantic upbeat sections and slower melancholic sweeps. How did you choose this piece?
I went around the [PNB] building and asked a bunch of people what music they would choreograph to if they were making a piece. Not necessarily my dancing colleagues, but Peter [Boal, PNB artistic director], our conductor, the studio pianists. It was one of our studio pianists who brought me the Poulenc piece. He came to me with it written down on a piece of paper and just said, “This one.” It ticked off everything I wanted: two pianos, the right amount of time in the sections, it used our incredible orchestra and the two overall emotions in the music capture the thematic arc of the choreography.

This piece is definitely based on my life. There are representations of my mom, my dad, my wife and me but I don’t want to give too much away because I want people to derive their own meaning from it. I don’t want to influence how they look at the work in too strong of a direction. I can say that there are 16 dancers including two soloists and two principals. One thing I always try to do in my choreography is to make the dancers as human as possible. I want the audience to be able to relate to them as people, as opposed to classical 18th-century ballet figures.