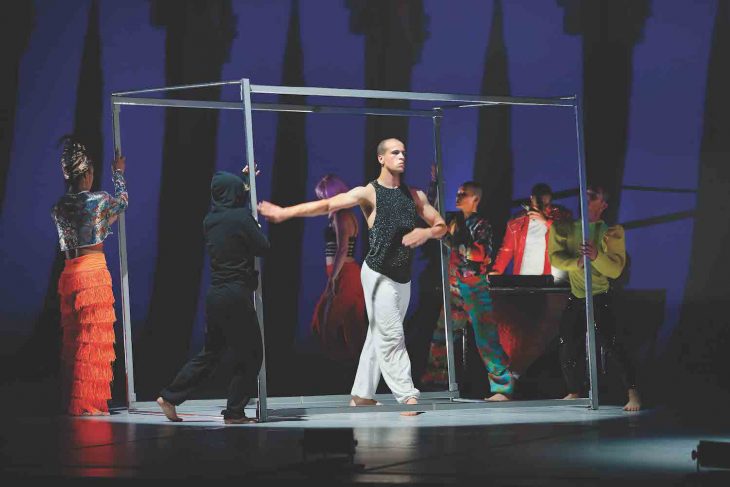 'Lance: Pretty aka The Escape Artist,' photo by Paul B. Good

In 1994, New York-based choreographer Bill T. Jones premiered a controversial evening-length work that excavated the experience of receiving a life-threatening medical diagnosis. Mounted on the Bill T. Jones/Arnie Zane Dance Company, Still/Here featured video of individuals living with such diagnoses, spoken and recorded text from interviews with them, and abstract choreography. For the most part, the work was received favorably, but at the time New Yorker critic Arlene Croce refused to see or review Still/Here, famously writing that “by working dying people into his act,” Jones had “put himself beyond the reach of criticism.”

But Jones wasn’t courting controversy. Jones was looking at the human condition, like many artists, but also addressing critical social issues such as interracial relationships, homosexuality and identity politics, as well as exploring very personal pain: His longtime partner and collaborator Arnie Zane died of AIDS-related lymphoma in 1988, and Jones himself is HIV-positive. Thanks to boundary-pushing bravery and continual innovation, Jones’ work has been making headlines for more than 30 years.

As a student at Binghamton University, Jones found two of his greatest loves: Arnie Zane and dance. His early works, choreographed in the mid-’70s both independently and collaboratively, brought together multimedia elements and pedestrian movements, sidelining more traditional ballet for more electric forms that embraced diversity, in physical types, racial backgrounds and sexual orientation.

Jones and Zane formed their eponymous company in 1982; Jones would go on to create more than 100 works for its dancers over the years, and help develop a modern movement style that blends ballet, contemporary dance, hip-hop and other genres. Jones’ accolades include collaborations with high-profile artists such as Keith Haring and Jenny Holzer, creating work for companies including Alvin Ailey American Dance Theatre, and choreography Tony Awards for Spring Awakening and Fela!

The 65-year-old choreographer, who remains artistic director of the Bill T. Jones/Arnie Zane Company, is now bringing his latest work, Analogy Trilogy, to Meany Center for the Performing Arts. There, for the first time, three thematically connected evening-length works will be performed in succession over three nights, as Jones always intended.

The trilogy begins with Dora: Tramontane, a piece born from an interview Jones conducted with 95-year-old Dora Amelan, a French Jewish nurse and survivor of WWII (she is also Jones’ mother-in-law). The second night’s work, Lance: Pretty aka The Escape Artist, focuses on Jones’ nephew, Lance T. Briggs, and takes the audience on a tragic yet redemptive journey through the sex trade, drug use and 1980s excess. The final work, Ambros: The Emigrant is inspired by the character Ambros Adelwarth in W. G. Sebald’s historical novel, The Emigrants.

In anticipation of the trilogy, we spoke with Jones on the phone from New York about the new works, how the seemingly disparate pieces relate, and where he still finds inspiration after nearly four decades in the industry.

Where do you find ideas for your choreography? Do you get a sudden jolt of an idea and run with that, or is it a more gradual process?
The trilogy started with a spark. I was reading the works of German novelist W.G. Sebald and it got me thinking about how completely enthralled I was with literature. I had been making dance for what was approaching 40 years and I asked myself what was different now? Was it something different in the theatre between my ears? Was it my envy and love of language and its myriad interpretations? Reading that book caused me to think about all these things. There’s always the question, why make another work? I’ve been doing this since I was 19 years old. The other thing, aside from Sebald’s novel, that drove me was the desire to free myself from the constraints of the contemporary dance paradigm.

The way dance looked in Merce Cunningham or Tricia Brown’s era was so different. The dance world and what choreographers are exploring now revolves around ideas such as the company’s relationship with the audience, the use of dance as a tool for archiving, the political idea of what kind of power structure are we promulgating by having choreographer at the top of a creative pyramid. All these things came up as a reaction to this book. That’s how my mind works.

Tell me about the Analogy Trilogy. Reading brief descriptions, the three subjects seem fairly disparate—what ties it all together?
It’s the first time I’ve ever developed something over six years with overlapping base elements like the performing environment, musical components, sets or props that exist in all worlds. I could become rather glib and say that there’s tragedy in all of them or say that you’re looking at questions about what does it mean to have a life well-lived?

When we move away from the thematic, there’s something about the form of contemporary performance. It’s important to look at questions of what does time mean in Ambrose, in Lance and in Dora? What does history mean in Ambrose, in Lance and in Dora? How does sexuality work in Ambrose, Lance and Dora. What is the movement like? When Arnie Zane and I created duets together, a lot of it was about stop-action pictures, shapes that are abstract, taken apart and put back together, shapes that are inverted and turned around. Those shapes begin to become a language that is full of potential. There are certain lines of people, certain gestures in Dora that you will see fleetingly in Lance that you will see in Ambrose. That language of the choreography is something that also unites them.

You work with movement and the body, but words are clearly very important to you. All three parts of the trilogy are based on text, whether interviews or literature.
The world was brought to me through my mother and father’s telling of stories, some of them fables, some of them fairytales, some of them horrifying stories about race relations or the relationship between men and women. So I grew up in a world where storytelling was very, very important and I found that when I began to try my legs or my wings, I found myself telling stories on stage. Of course I was telling stories in combination with abstract movement and I started to believe that the sum of the two would be greater than the parts. It was a modernist gesture trying to reinvent meaning—sometimes the stories are more important than the movement and sometimes the movement decimates the stories, pounds them up and forces us look at them from a new angle.