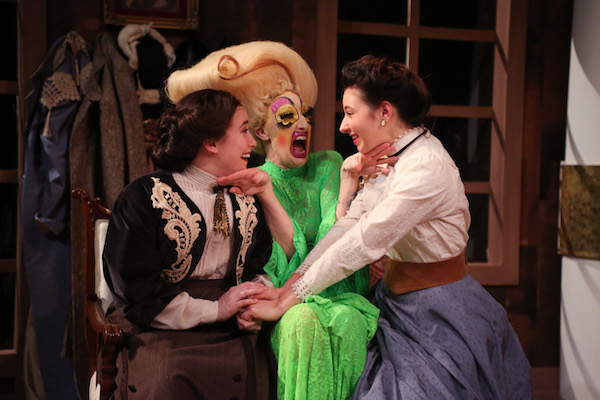 If you’re not quite sure what you’re getting into with the latest play from Washington Ensemble Theatre (which you definitely should get into), turn your attention to the title. Cherdonna’s Doll’s House may be riffing on the famous Ibsen play, but this is Cherdonna Shinatra’s show and we’re all just spectating—actors included.

WET isn’t doing A Doll’s House, touted as a watershed feminist play since its 1879 debut. Sure, it’s set in the home of Nora (Leah Salcido Pfenning) and Torvald Helmer (Jason Sharp), and does involve light financial fraud and heavy female belittling. And yes, the Helmers are visited by old friends (Samie Spring Detzer, Brace Evans) and current colleagues (Jeffery Azevedo). But dance artist and bio drag queen Cherdonna is interrupting a bare-bones, laugh-out-loud version of the original script, significantly truncated and chopped-up in the adaptation by Cherdonna (Jody Kuehner) and Ali Mohamed El-Gasseir, who also directs.

To start, Cherdonna slinks jerkily on stage to the pompous strains of the Masterpiece Theatre theme music, looking like she got assigned “Praying Mantis” in an insect-themed challenge on RuPaul’s Drag Race. Skintight, bell-sleeved acid-green lace (designed by Danial Hellman) stretches underneath her signature mug: blond Flowbee bouffant and drag makeup by spray gun. We are all about to watch her favorite play, A Doll’s House, and Cherdonna is SO EXCITED.  “I love this plaaaaay!” she squawks as she chats with the audience, her boundless delight rippling from her face down into her constantly contorting limbs.

Theatrical imaginings of what happened after Nora’s famous door slam at the end of Doll’s House exist, including an ill-fated 1982 musical A Doll’s Life and Lucas Hnath’s A Doll’s House, Part 2, which opened to rave reviews on Broadway just last week. But Cherdonna doesn’t want to continue the story of Nora, who found the courage to walk out on a suffocating marriage. She wants us to consider the idea of the play itself, so we’re plopped smack into the cramped, cozy middle-class Helmer home at Christmastime (lovely scenic design by Pete Rush).

Cherdonna is both there and not there, helping Nora off with her coat, breaking things in the house, sometimes acknowledged, sometimes not. Sometimes she addresses an actor by their real name, and then they have a chat. When Nora and her friend Kristine Linde (Detzer) mention Dr. Rank (Evans) in conversation, Cherdonna can’t help calling the actor on stage. “Braaaaaace!” she bellows. “Brace! We were just talking about you. Do you like this play?”

The cast spends as much time talking about the play as they spend performing the play, and as much time playing themselves as their characters. Just as this stop-start convention starts to wear thin, things shift, moving further into Cherdonna’s surreal Norwegian world, interrupted by increasingly elaborate dance sequences, hilarious audience chats, cookie breaks, “Power of Love” lip syncs and hella mansplaining.

Some questions have plagued me since opening night last weekend: Can you make a point about a classic play’s current relevance if you don’t actually do much of the play? When it comes to rethinking a classic, where is the line between an intellectual exploration of something old and the creation of something completely new? Nora, a seminal figure in Western theatre, spends much of Doll’s House refracting the crushing realities of the world around her—and when we don’t see that world fleshed out, the character likewise can’t be fully formed. As such, this production isn’t a deep interrogation of the original, but it didn’t need to be, or really even mean to be. This is Cherdonna’s play, and when she’s finally kicked off stage for being too disruptive the whole thing deflates—a final revelatory Nora/Torvald scene is dry as dust until Kuehner reappears to say her goodbyes.

Cherdonna, for all her artifice, is the only real thing happening on stage, and she’s more than enough.

Liberation comes at high personal cost. Admitting that things we once needed no longer serve us is painful, but not as painful as letting them go. Nora must leave Torvald, whom she did love, and Kuehner, as herself and as Cherdonna, must give up a beloved theatrical canon that would seek to contain her. It’s both a play and not a play, so funny and so sad, a look back and a rocket forward.