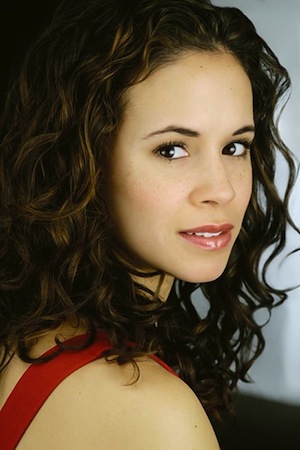 Fresh off a run playing Octavia in a high-profile production of Shakespeare’s Antony and Cleopatra (a co-production between the Royal Shakespeare Company, The Public Theater and GableStage in Miami), playwright/actor Charise Castro Smith has switched artistic gears to bring the world premiere of her play The Hunchback of Seville to Washington Ensemble Theatre. The play is set it 1504 in Seville, when news of atrocities in the New World has reached a lame duck monarch in Spain. It’s an oddball story filled with the heightened language of the classics topped with elements of classic farce, and it’s WET’s final play in their longtime home on 19th street. We chatted with this skyrocketing, down-to-earth writer about the magical storylines that make her tick.

The Hunchback of Seville is pretty out there. Where did this story come from?
I’ve always really wanted to play Richard III, but the chances of me playing Richard III seem slim. So I guess I wanted to give other women the gift of playing a hunchback? That was one of the threads. Another was around Columbus Day, when I was like, ‘This is such a fucked up holiday that we still celebrate. Why is this still a thing?’ Those were the two major strands: a hunchback and colonialism.

[Pulitzer-winning playwright] Paula Vogel was the head of playwriting while I was studying acting at Yale. She does these things called bake-offs, where she’ll give you a list of ingredients, a general theme, and some plays to read as background. This play really started off as a bake-off when the theme was fallen women, I think. I took it on as a farce, and decided to write a play that has a five-act structure, Moliere-ish. Also, my other plays take place in lots of different places, so I wanted to see what happens if I try to write a play that’s all in one place, all in one day.

Do you gravitate towards bizarro storylines?
So far, yes. My play Boomcracklefly is by far my weirdest play, it’s three different narratives all woven together—an engineer trying to build wings to fly from Havana to Miami; sisters who are acrobats in Key West, one of them gets a brain tumor and starts hallucinating the ghost of Ernest Hemingway; a transgender prostitute in New York who picks up this guy and starts stealing his body parts. One of the big things that connects a lot my work is wanting to write more out-there roles for women on stage. As an actress I’m keenly aware that it’s always like, ‘this person’s girlfriend,’ or ‘this person’s sister,’ so as a writer it’s a big project of mine to make cool new challenges for women to do.

Is that lack of interesting female roles what fuels your writing?
Having just come off of this production at the RSC—it was awesome and amazing, but there were like three women and seven men in the cast. And when we were at the RSC they were doing this production of Richard II that was literally like twenty men and four women and I was like, ‘Come on guys, enough of this.’ So my latest play Feathers and Teeth, which is having a workshop production at the Goodman this fall, is about this 13-year-old girl who’s just lost her mom and she thinks her stepmom is a demon, and her stepmom is actually a demon. Also, I was in LA last month and spent a lot of time driving to Vegas to see my husband [actor Joby Earle] and I was always thinking, ‘How come there are no female magicians? Welp, there’s gonna be one, in Vegas in the 1960s.’ That’s something else that’s bubbling.

Are you working on something new?
I’m excited to go back east because one of the idiosyncratic ways that I write is that I put giant papers on the wall so I can kind of map everything out. I’ve been traveling so much this year that I haven’t been able to get my map on.

Do you find it tricky to balance an acting career with your writing?
Well, every time I say I’m going to stop acting it ends up happening again, so I don’t say that anymore! But right now I’m more focused on being a writer. They’re two such totally different frames of mind, which is why I shy away from writing stuff for myself, actually. I was in my first full play, but I’ve never been in anything else I’ve ever written. When you’re writing something, it’s big picture: is the story getting told? What can I do to help this moment be clearer? You have to have a wider lens than when you’re working on a part, where you have to be aware of what’s going on around you but you have to be playing your own actions.