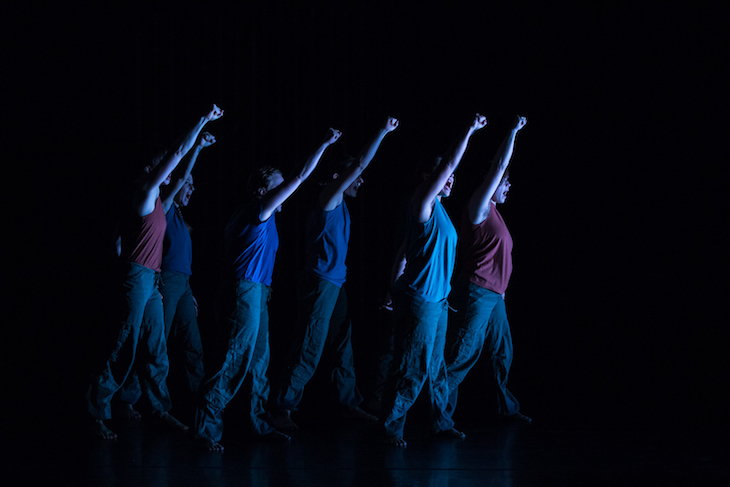 In 2003 America was two years into George W. Bush administration and diving headlong into an unpopular war. It’s no surprise that a political dance work from that era might feel relevant again now, which is why veteran Seattle choreographer Michele Miller reached out to her old colleague Amii LeGendre with an offer to reset LeGendre’s 2003 work The Lottery for her upcoming show I Am Not A Small Woman.

The two artists worked closely together before LeGendre moved to New York a decade ago to teach at Bard College, ending her Seattle career of teaching, performing and leading LeGendre Performance Group. Miller co-founded Velocity Dance Center and teaches at Cornish, and since 2010 she’s operated Shift Movement and Healing Arts in Fremont, where she teaches martial arts and rehearses her company Catapult Dance. Unlike much of the current dance community, which is bolstered by a constant influx of 22-year-olds, Miller, who moved to Seattle in 1992 to dance with Pat Graney, remembers Seattle in 2003, and in particular LeGendre’s influence.

“It saddens me to know this powerhouse of a woman who strongly shaped the current dance scene is not really known any longer here,” Miller says.

Earlier this month, LeGendre returned to Seattle for a short, intensive rehearsal period, resetting The Lottery on six Catapult dancers. At a recent open rehearsal at Shift, the dancers hurl themselves through space with abandon, diving to the ground or into each other’s arms, a thrilling display of trust and control. Along with LeGendre and original Lottery cast member Alianna Jaqua, a who’s-who of Seattle dance lineage is in attendance, including Mary Sheldon Scott, Pat Graney and KT Niehoff. “In martial arts it’s important who your teacher is,” Miller says. “There’s a stream and it’s very rich, and we don’t do that in dance.”

By bringing The Lottery back to Seattle audiences she hopes to cultivate a better understanding of how dance has evolved here. Through the process of resetting the choreography, Catapult dancers are learning about an earlier generation of Seattle dancers. Stepping into movement made with other bodies is always an act of taking on another human’s tendencies and training, and in this case, it’s a firsthand lesson in how dancers in Seattle worked 15 years ago.

The Lottery’s daring partnering and athletic virtuosity are accented with small idiosyncratic gestures—a trembling finger, a ribcage collapsed like a sack of potatoes—along with bizarre faces, puffed-out gorilla cheeks or maniacal smiles. These details tell the work’s story of individual responsibility and group dynamics.

“I remember listening on NPR to an Iraqi woman my exact age,” LeGendre says. The woman worked at a museum that had been bombed. No more job, no more community. That could be me, LeGendre thought, engaging with ideas of privilege long before they became trendy.

Along with The Lottery, I Am Not A Small Woman includes three works by Miller. Premiering is Skin, a work exploring the spectrum of gender experienced as female-identified people. Pulling from her life and the lives of her cast members, Miller created improvisational prompts, collaboratively generating the material for this new work. “When is it OK to buy into what’s expected?” Miller muses. “What gets put on you based on what is seen?” Skin digs into these questions and others. “I try not to tell someone what to think and instead present an idea,” she says.

Also on the program is Resistance (2016), which is inspired by the Umbrella Movement, a pro-democracy movement born from the actions of high school students during the Hong Kong protests of 2014. I AM the Bully (2014), which explores the psychology behind bullying through a complex performance of simultaneous strength and insecurity, also makes a reappearance.

Miller’s research into these topics is embedded not just in her choreography but the way the movements are performed. As Miller gives her cast notes on Bully, she digs into an individual movement, where the dancers bend one knee deeply as the other leg sweeps around in an arc. She asks her cast to decide if this action is surrendering or reinforcing. “Where do you choose to give up and where are you solid?” she asks. “In self-defense we talk about that a lot: Where is the line where you need to tell someone to back off? Especially as women, we’re taught to let people inside that line because it’s considered rude to tell someone to back off.” Empowering her dancers to interpret the movement keeps the work personal and present, for both those dancing and those watching. Miller takes one of her dancers in a gentle choke hold. “Really grab my elbow and pull down. Tuck chin. Don’t fake fight.”

This commitment to physical risk—a commitment made possible by the trust and skill Miller has nurtured in her community of dancers—is what makes Catapult’s work so exciting. “All of you were working together so much, you were able to surpass that place of carefulness,” choreographer Sheldon Scott observes at the rehearsal. “This vocabulary that once was familiar I very seldom see anymore.” The product is always reflective of the process, and as LeGendre and Miller engage in thoughtful dialogue with the dancers, they’re passing on more than just choreography.

Catapult Dance’s I Am Not A Small Woman shows June 29–30 and July 6–7 at Erickson Theater off Broadway.