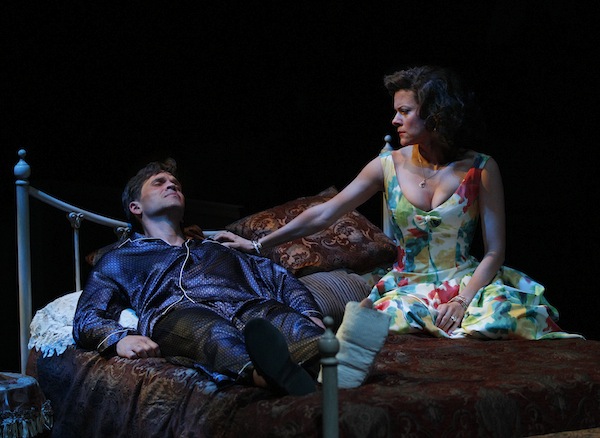 For me, like many, mentioning Tennessee Williams evokes a visceral response, like smelling a familiar fragrance—the languid, suffocating sensation of Southern heat and sweat, laced with liquor and colored like fading silk. Cat on a Hot Tin Roof, which won Williams his second Pulitzer Prize (the first came for A Streetcar Named Desire), fulfills that sensory experience nicely, set as it is in a splendid plantation house in the Mississippi Delta. But that reaction is a romantic, shallow take on his writing—Williames hewed to much more than just geography. “Every artist has a basic premise pervading his whole life…and that premise can produce the impulse for everything he creates,” he told LIFE Magazine in 1948. “For me the dominating premise has been the need for understanding and tenderness and fortitude among individuals trapped by circumstance.”

Most of the central characters in Cat, now running at ACT Theatre directed by Kurt Beattie, are trapped by circumstance but none more so than Maggie (Laura Griffith), a woman from a poor background who has married into the wealthy Pollitt family. She and her husband Brick (Brandon O’Neill) have returned to his family’s plantation to celebrate his father Big Daddy’s (John Aylward) 65th birthday. Also in attendance are Brick’s adoring mother Big Mama (Marianne Owen), his overlooked older brother Gooper (Charles Leggett), Gooper’s eavesdropping wife Mae (Morgan Rowe) and their six children (if you count the one currently in utero).

All the action takes place in Maggie and Brick’s bedroom/sitting room (lovely gold-on-beige-on-taupe design by Carey Wong), because former football hero Brick broke his ankle trying to jump the hurdles on the high school track the previous night, drunk as hell (as always). The whole family has assembled for a birthday, but also because Big Daddy may be very sick; there is much talk of dividing the estate, of children (or lack thereof)  and mendacity.

Maggie dominates the first act like a Shakespearean hero, nattering away to a taciturn Brick who couldn’t care less what she has to say as long as he has whiskey. It’s that whiskey that could cost the childless Brick his portion of Big Daddy’s estate (“28,000 acres of the richest land this side of the valley Nile”), especially if stable, family man Gooper has anything to say about it. But underneath her idle chatter, Maggie’s fear is pathological and pervasive—this isn’t just a woman who finds being poor unpleasant, she will never be poor again. She loves Brick and is fighting like a caged animal, albeit in a beautiful skin. Griffith is somehow too breathy, her confidence too unshaded. Being seductive and feline is just one of the tactics she must use in her unwavering pursuit of her goal—to forge a life (and have a child) with a man to whom she is utterly devoted, who is utterly indifferent to her. Griffith’s unfortunate tendency to mirror her words with hand gestures, as well as a voice that seems to live only above her shoulders instead of resonating in her entire body, dilutes her power considerably.

If the first act belongs to Maggie, the second act belongs to Big Daddy, a Southern thunderstorm of a self-made man and a “Mississippi redneck” through and through. John Aylward plays him with outsized relish, pouring out his own fears and poking his fingers into the wounds Brick would like to keep covered.

Griffith is a stunner as Maggie, though why costume designer Melanie Taylor Burgess chose to dress her in a distracting strapless bra and half-slip instead of a full slip is beyond me, especially as nothing she wears seems to necessitate that particular underwear. It’s iconic—everyone from Elizabeth Taylor on film to Barbara Bel Geddes, Kathleen Turner, Anika Noni Rose and Scarlett Johansson on the Broadway stage has worn a slip—and while there’s certainly no requirement to toe that line, to change it just for change’s sake seems pointless. (That said, the dress Maggie put on top of that slip later was so jaw-droppingly beautiful I stopped caring.) The rest of the costuming is splendid, from Brick’s silk pajamas to Big Mama’s matriarchal finest to Mae’s burnt-orange skirt set that made me appreciate just how far maternity wear has come.

Maggie and Big Daddy are the forces of nature in the house but it’s Brick who is the center of gravity. O’Neill gives a stellar performance, subdued and roiling, as the golden boy gone to seed, a sports star turned sports announcer turned full-time drinker after the death of his best friend Skipper, also from drinking. The unsubtle homoerotic overtones would certainly have been scandalous in 1955, but they don’t really do a lot for us now—and it’s the test of a great play if the resonance carries on despite changing social mores. What we can relate to is his self-loathing and delusion—as Brick and Big Daddy like to put it, mendacity—liars and lies, that we tell others, and ourselves.

All the actors have great facility with Williams’ poetic, quotidian language, and the result is a production that is solidly good. The jokes—and there are many—land with ease, and the surface-level story is told cleanly and clearly. Thankfully, ACT has gone back to Williams’ original ending, not the watered down version (which leaves things slightly more hopeful for Brick and Maggie) that director Elia Kazan pressed for when the play premiered on Broadway in 1955. (Though I have to say, the children’s whisper-singing that closed out the show gave me the absolute creeps, and not in a good way.)

But this staging in the round let a lot of heat dissipate up into the ether, instead of trapping it until the room reached boiling point. Actors had to move around the stage (and up the stairs and around the upper path behind the audience) a lot to give all audience members a fighting chance of feeling included, and all the activity felt like an emotional release valve left open. It also kept Brick and Maggie’s bed—a loaded piece of furniture if ever there was one—from carrying any significance. Without feeling that tension, born of fear and desperation, Cat feels like a battle over farmland, rather than a great, gimlet-eyed look at the ugly, ever-changing human condition.