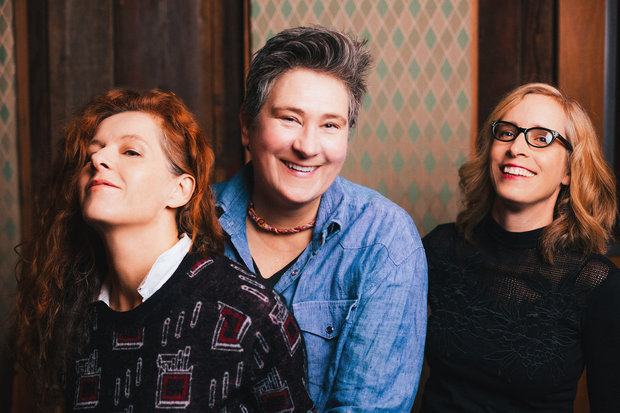 Monday, June 27
Shane Wahlund and Michael Anderson’s long running, twice-monthly showcase of video shenanigans Collide-O-Scope rebrands itself tonight as PRIDE-O-Scope for a queer-themed evening of revelry and yucks. These two masters stitch together the oddest of the odd in found footage to create a hallucinatory pop-culture AV experience similar to what I always hoped an acid trip would actually look like. (pro tip: grab a free Red Vine and suck your drink through it like a candy-dropping 8-year-old.) –Dan Paulus
Re-bar

Thursday, June 30
Rarely does a supergroup sound as natural—or name themselves as uncreatively—as case/lang/veirs. On their just-released eponymous album, Neko Case, k.d. Lang and Laura Veirs sound like they’ve been playing together forever, an egalitarian band fronted by by three singing, songwriting powerhouses with zero ego and ultimate taste. The group was lang’s idea; the album was recorded in Portland and produced by Veirs’s husband Tucker Martine. Abetted by a killer quartet (including Seattle guitar genius Johnny Sangster) the project is a powerful entry into folk-pop canon, with haunting, elegant songs long on melody and poignant vocal harmonies. –Jonathan Zwickel
Woodland Park Zoo

Friday, July 1 – Sunday, July 3
I am not-at-all-secretly obsessed with burlesque/dance/drag/comedy duo Kitten ‘n’ Lou, and let me tell you why. Their work is painfully funny, devastatingly smart, deeply campy and, of course, dripping in glitter. They’ve packed up their previous summer show, Freedom Fantasia, and are unveiling a new July offering called, appropriately, Camptacular! The talented cast includes top-notch regular K ‘n’ L collaborators like Waxie Moon and Cherdonna Shinatra, in a show that “promises to hike up all the short-shorts and melt all the popsicles,” and that’s all I want for summer. –Gemma Wilson
The Triple Door

Saturday, July 2
The unequivocal King and Queen of NW rock are gracing us this evening with a career-encompassing presentation that’s the closest thing a lot of us have to religion. Fred and Toody Cole (The Rats, Dead Moon, Pierced Arrows) have played more shows, written more gut-wrenchers, and shredded more faces than all other bands currently working the region combined. Come get dusty as these two old-time dreamers spar through an intimate acoustic song cycle and renew your faith in rock-n-roll. –Dan Paulus
The Funhouse