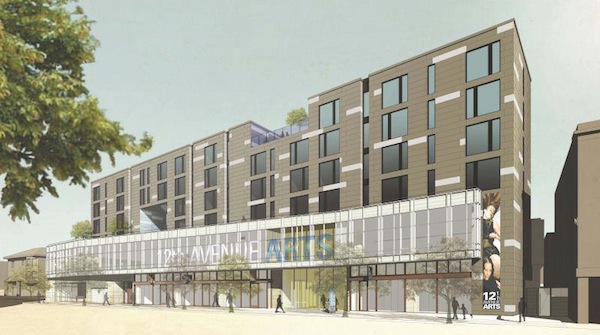 But this year Block Party won’t just draw out massive crowds like hipster catnip, it’ll also lend support to the 12th Avenue Arts project, an unusual mixed-use building now under construction on 12th and Pine. Developed by Capitol Hill Housing, a nonprofit that owns and maintains 44 affordable housing buildings in the city, 12th Avenue Arts will include 88 units of affordable housing, along with community event space, retail space and two black box theatres. Block Party goers are being invited to donate to the project when they buy tickets. Donations can be added to the ticket cost before checkout, whether purchased online or at the festival. All donations will be matched by CHBP producers up to $5,000.

While nightlife business is booming in Capitol Hill, affordable housing and live performance space have dwindled considerably in recent years. So why would CHBP direct support to 12th Avenue Arts?

“Block Party has a responsibility to the area as a whole,” says Jason Lajeunesse, a Pike/Pine godfather who’s part owner of many Hill hot spots, including Neumos and Lost Lake, and became Block Party’s proprietor last year. “Capitol Hill was called one of the top 12 arts neighborhoods in the country. In order to maintain that, artists need the ability to live and work in the neighborhood. You need things like 12th Ave Arts, you need Capitol Hill Housing, you need affordable spaces so that can happen.”

Given the high price of real estate and the expense of maintaining a performance space, theatre hasn’t been a big presence in the Capitol Hill scene of late. But, Lajeunesse insists, there is absolutely a place for it, along with plenty of symbiotic potential.

When these companies join groups like Annex Theatre, Velocity Dance and Balagan Theatre (housed at Erickson Theatre Off Broadway) on the Hill, the neighborhood could be on its way to becoming a performing arts destination in a way that it hasn’t been before.

“It’ll give theatre aficionados a reason to come here, and it’ll also provide a benefit for people that already do live in the neighborhood,” Lajeunesse explains. “There are definitely a lot of young people coming out for the nightlife scene, but there’s also a very high-end food scene, and those same people are also theatre lovers and music lovers, and people with rich palettes that like all kinds of things. To me, it seems like a natural fit.”