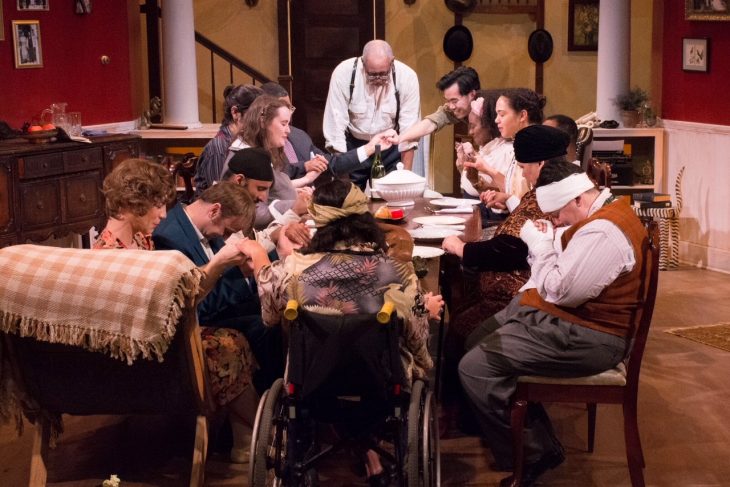 The cast of 'You Can't Take it With You,' photo by Ken Holmes

Is there any form of comedy more dispiriting than screwball done poorly? The jokes are all there intact, but they’re splayed out on the table, lifeless.

There are scattered moments in Sound Theatre Company’s production of the Pulitzer-winning 1936 George S. Kaufman and Moss Hart play You Can’t Take It With You that apply defibrillator paddles, jolting the show back to life for a minute or two or five, but a consistent rhythm never emerges.

It’s easy to see why Sound’s artistic director Teresa Thuman (who also directs and appears in a small role) chose this play about a woman’s large dysfunctional family threatening to derail her engagement. It’s anything but a moldy oldie. The one-liners crackle. The structure is elegant in its creation of chaos. The anti-capitalist messaging is blunt but meaningful.

And Sound has enhanced the show’s ideas about human harmony by non-traditionally casting just about every role. In a show that touts the primacy of loving people more than wealth, it’s significant to see a cast that isn’t predominantly white faces.

Also significant: This is a play that demands a lot from its actors, and there are many here who struggle. Kaufman and Hart’s play is long (three acts, two intermissions and three-plus hours when all is said and done) but it’s hardly lethargic, with rapidly pinging dialogue and carefully orchestrated pandemonium.

More often than not, those orchestrations fall apart in Sound’s staging, which suffered from dropped lines, stilted pauses and misspoken character names at its opening night performance.

More fundamentally problematic: There are 18 actors, many of them on stage simultaneously, and few of the performances here are in sync with one another. The size of the cast amplifies, rather than hides, weak links.

On the positive side, Ayo Tushinde is an entertainingly frustrated Alice, the outlier in a family of failed artists, tinkerers and eccentrics who just wants to get married to the son of a wealthy industrialist. As her mother, Penny, Shermona Mitchell is responsible for most of the show’s comedic energy, eventually reappearing with another freewheeling bit of shtick to give the show a shot in the arm.

Tee Dennard’s laconic patriarch of the family, who’s never paid a cent of income tax and has little use for societal convention, nails the laugh lines even as his performance is a bit too unhurried for the show’s pace.

And among the inconsistency of the comedy, there’s plenty of room for a straight man to stand out, as Bob Williams does as uptight father-in-law-to-be Anthony Kirby, a man whose own conception of himself as an open-minded person will be tested.

Robin Macartney and Parmida Ziaei’s deep-focus set design presents a convincingly lived-in home stuffed with bric-a-brac, a place where every person’s interest is pursued with maximal zeal and minimal talent.

The family in You Can’t Take It With You is a collection of mediocre writers, unaccomplished musicians, bad dancers, worse painters and inattentive engineers, all happy in their obliviousness. Given the usual reliability of Sound Theatre Company, I’ll resist making any kind of comparison.

You Can’t Take It With You runs through March 11.