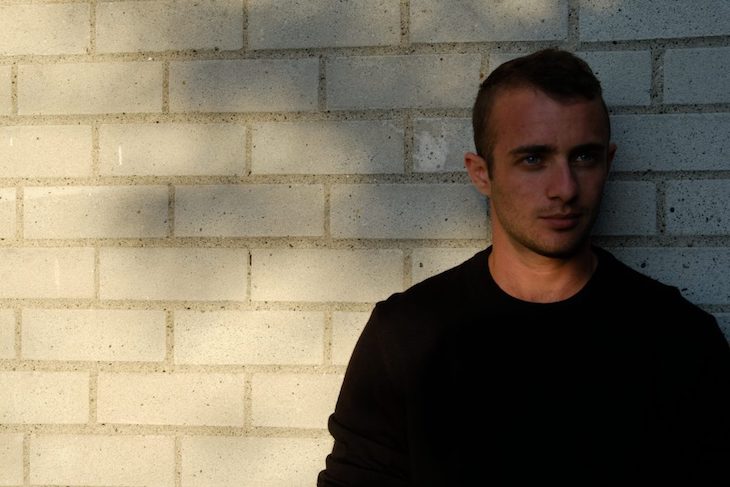 Calvin Gimpelevich’s debut book of short stories, Invasions, begins by offering us the literary version of a smooth glass of wine. We slowly sip and taste, walking through three vignettes of varied experiences of embodiment: deciding what to do with one’s nipples before top surgery, secret sexual liaisons while catering bourgeois weddings, the winding story that goes through a woman’s head the first time her girlfriend spends 20 minutes alone with another woman. Each story is a pair of hands tightly cupped, holding an ocean within them, ordinary experience rendered artful by Gimpelevich’s framing. 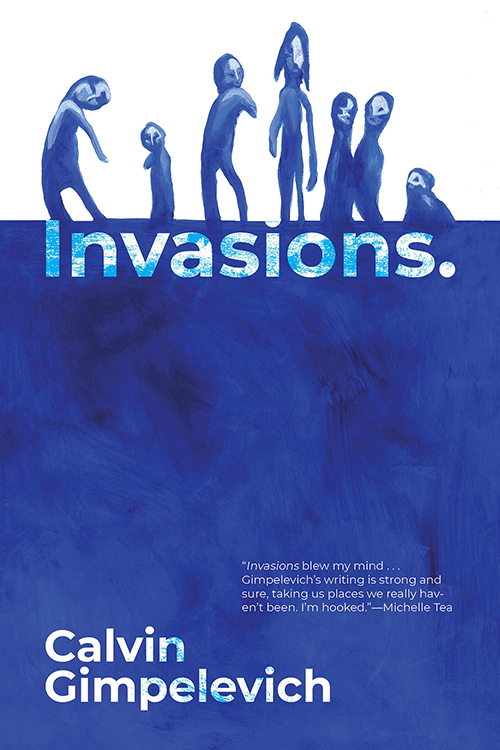 By his fourth story, “Rent, Don’t Sell,” Gimpelevich is serving up fiction as boozy shots of character, plot and social commentary. In this dystopian future fantasy world, veterans, sex workers and proletarians service the wealthy by switching bodies with them. Rather than appropriating Asian practices like yoga or qi gong to get fit, you can simply rent the consciousness of an Asian woman to do your workouts for you. Nok, a former Marine who lost part of an arm while in an occupying force, works as a physical trainer by moving her consciousness into the bodies of her clients and working out vigorously so they don’t have to. She meets Natasha, who swapped out her old body for one in which she hopes to be free of body dysmorphia. Natasha did this in lieu of undergoing traditional gender reassignment surgery and now regrets the decision, as she’s living with the body memory of the previous owner. Nok’s sister Mara rents out her own body so others can enjoy her beauty, not knowing what is actually happening to her when her consciousness is absent.

Sex work, Gimpelevich suggests, lies on a spectrum with all work, including military labor. He gently reminds us that the body has an intelligence that lives outside of the mind, even as a court decision in the story declares, “property contracts are binding—bodies belong to the mind,” as Natasha attempts to get her old body back. “You know what the military taught me?” Nok says. “If you can take it, it’s yours.” Our working-class protagonists began to act with the logic of the ruling classes that they’ve been in service to.

“The Sweetness” picks up where “Rent, Don’t Sell” leaves off, answering questions about what it means to die repeatedly, to inhabit the body of a virulently anti-queer cop when he busts into a bathhouse and beats you senseless for being with another man.

“Revenant” never allows us to find steady ground. The confusing tale of a young woman sexually abused by her best friend’s father leaves us disjointed, unsure of what actually happened and what is in the imagination of the narrator. Her realization that he murdered his missing daughter during a violating, violent confrontation reflects the experience of selective memory and narrative confusion that can happen after experiencing sexual violence.

Both thrilling and horrifying, “Transmogrification” briefly considers what a six-year-old girl might do when she wakes up in the body of a middle-aged man. It ends with a description that applies to the many archetypes present in all of our psyches: “The distinctions between your mind and body start to blur. You are a six-year-old girl in the physique and shell of a man. You are young and old and strong and weak and you have nothing to lose.”

Throughout all of the stories in this collection, Gimpelevich offers a refreshing emotional honesty, articulating experiences that resonate through the cells of our bodies, but don’t often resound into our speech. He invites us to chuckle at a choice of words while kicking us in the gut with the excruciating pain of gendered, classed and raced violence—and makes us appreciate him for it. We are left with the question, who is telling the story, our minds or our bodies?

Invasions flows from experiences that border on the divergent and taboo—polyamory, secret queer encounters—into the surreal, the unreal, the fluidity of moving from body to body. Gimpelevich writes with a rhythm that sings like a rock ballad; we have no idea where he might take us next and we don’t much care as long as we get to come along.