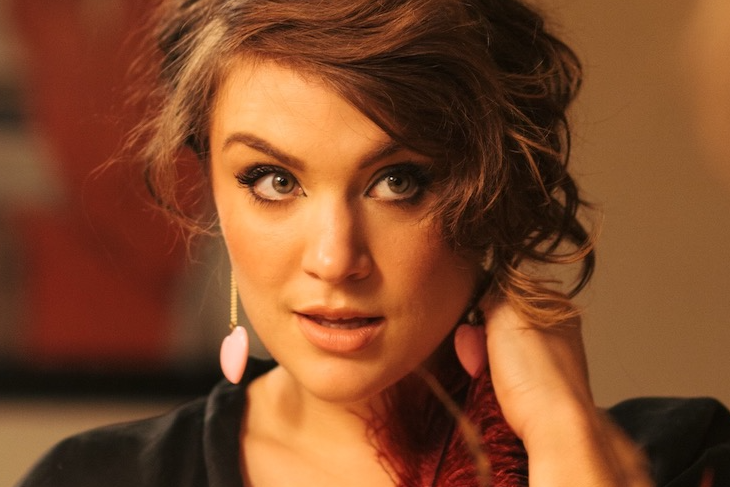 A Caela Bailey production is a big production. She’s got a massive community—a cast of thousands at the ready for projects like her recent “Belltown Crawl” music video. Making art alongside her friends and collaborators is one of her greatest creative joys.

Not only does Bailey have one of those voices that sounds like a river of gold pouring up from soles of her feet, she’s all about making gorgeous art that’s fun, funny and earnestly enjoyable. No wonder she starred in Mod Carousel’s parody of Robin Thicke’s “Blurred Lines,” (5.7 million YouTube views and counting). On a neighborhood jog listening to her album The Gospel of the Gutter Queen, I ended up doing that awkward thing where you start to dance while also trying to keep moving forward, and you look stupid but are having so much fun you don’t care.

Bailey comes by her entertainer genes honestly; her parents are both multi-talented performers and co-founders of the Moisture Festival, and Bailey grew up in a circus-cabaret world, known professionally as the Royal Famille DuCaniveaux. For one night only, on March 12—her birthday!—Bailey brings her new autobiographical show, Who in the World Are You?, to the Triple Door. She’s got a lot to talk about.

Your performance history is long. Why make an autobiographical show now?
The main reason is that I was recently asked to audition for this huge stage show in Berlin. It’s a great story and I’m going to tell it on stage. I was flown to Berlin to audition and it was very surreal. I won’t know if I got [the gig] until a week before my show, but I thought to myself, either way, this is a turning point. If I’m going to Berlin I wanna look at what I’ve done in this city before I’m out of here. If not, I need to figure out where I am. I’m bumping myself up to the next level—because, shit, I made it to the top 10 out of 500 people for this audition. It made me go, wait a minute, maybe I am a professional!

I also wrote a piece for the show Dear White People where I objectively looked at a part of my life that had just been a part of my story for so long that I didn’t think about it. I had to really look at it—who I was as a human, who I was in Seattle, as a member of America and the public-school system—and I went holy shit. I thought, I should do that with everything in my life!

What was the piece you made for Dear White People about?
I went to Washington Middle School and I lived in West Seattle. [The school] was pretty naturally segregated, but I was kind of adopted by a group of friends who were almost all Black young women. So, at the time, I really had no white friends, which was very different for a kid who grew up in a weird circus-cabaret life, where I knew people from all over the world. To be immersed in a culture that was very much not my own was new. Coming to understand that it wasn’t my own was a huge part of my life. I had grown up in this happy-happy joy-joy circus-cabaret-vaudeville world, where everything was fairies and the woods and musicians and drag queens and sparkles, and I was like, the world is amazing! Then I had to ask the question, especially as a white person: When do you first learn about racism? Which is very different for people of color and white people.

Tell me about your family.
My parents are some of the founders of the Moisture Festival, my mom is a Genius award winner, she was in the Pat Graney Company. She had a full ride to UW for gymnastics, but she dropped out and went to join the circus in Paris. When she got to Paris she realized that the circus there was really passed down through generations, and if you’re an outsider they aren’t gonna teach you anything. But all of her friends, and my dad, joined her and started performing on the street. Then they took mushrooms out in the mountains and declared themselves the Royal Famille DuCaniveaux which means the royal family of the gutter. When they came back they started performing at the Oregon Country Fair, and that’s where they met the Flying Karamazov Brothers, the Grateful Dead, Ken Kesey. I’ve gone every year since I was four months old, and this year I’m missing it for [Seattle singer] Adra Boo’s wedding. Love you, Adra.

What’s made the Fair such an important part of your life?
During the day there are about 30,000 people, and we do two shows a day. Then at night they kick the public out and there are about 10,000 people and it’s all the people who work there, and it turns into a wonderland. We have an amazing campsite and a big fire and we have music all night long, every night. So many people come by and just share. That feeling of you never know what you’re gonna see next—that’s been my whole life. I’m going to show some of the footage from that over the years at this show, because it’s one of those things where I don’t know if you could take it out of the context of that space, the hippie wonderland.

How old were you when you first started performing there?
I think the first time I was on stage I was about four years old, then the first thing I ever did on a stage-stage was with the Flying Karamazov Brothers at ACT Theatre, I think I was six, which I will also talk about in the show, because it’s a bizarre story as well.

Were you singing?
No, I was falling, that was my whole role. Oh, and I learned to play chopsticks on a mini-piano. Those were my big roles.

Are you focusing this show more on your personal or professional story?
It’s really more about what’s led me to perform because there was a long time where I wanted nothing to do with it. I was a very bad kid for a while there, I just wanted to party, which I will talk about because it taught me a lot, and then led me back to performing. I came into the Moisture Festival, and that’s when I became a regular host at the Can Can, which led to getting immersed in this Seattle burlesque scene that’s really rich. We have killer performers here. The same goes for music, certainly, but I never felt fully in the music world or the burlesque world. That’s a big part of this show, too: trying to figure out where I fit. Where are you gonna jump in with two feet?

You feel like you have to specialize?
Maybe a bit? But I’ve learned so much from both [music and burlesque], and I love bringing them together. I also like to throw my friends who are not necessarily performers in front of a camera next to professional performers because they’re badass and beautiful.

Is there a segment of the show that makes you the most nervous?
Probably this moment where I tell the story of this audition, which I haven’t told almost anyone. I’m going to sob on stage at some point, no doubt about it. But because that part of the story is unwritten—everything else I can work on, I can write, but that is being written for me, which is totally terrifying.

Are you having a hard time narrowing down what stories to include?
Oh definitely, but I think it’s the forks in the road, the turning points where you said, am I really gonna go down this path I may not come back from or am I gonna just skirt it? It’s about finding those moments that I think everybody has. They’re hard, but often they’re really funny. Sometimes they’re sad, but often they’re really funny, and I’ve definitely been going back and forth between laughing hysterically and crying uncontrollably. I’m excited to have everybody look at their own story in a way they haven’t before, hopefully.

Your projects often have a huge cast of collaborators. Will that be true on this stage?
This is a little more pared down, but I will have a full live band and full video set up, and there will be….surprises [laughs]. Absolutely there will be surprises. And it’s a good lead into the next time period for me, because I have surprises coming for the next few months. There are different things I’ll be releasing…

Sneaky! You’re putting all this creative and emotional energy into this one night. Do you wish you could do more? Or is this about lightning in a bottle?
Performing at Can Can you do 10 shows a week, so I’ve done that. But then last year I did my album release at Washington Hall, that was one night and I had 30 people on stage. There’s part of you that wishes you could keep doing it, but then there’s a part that is so magical because it’s, like, a combustible moment happening. I’m gonna have to warn people, I don’t know what’s gonna happen here tonight! Nobody knows what’s gonna happen tonight! Everybody in the room will experience something we’ll never experience again, and I think that causes us to be present in a different way, which makes it particularly special.

Who in the World Are You? runs at the Triple Door for one night only on Monday, March 12.