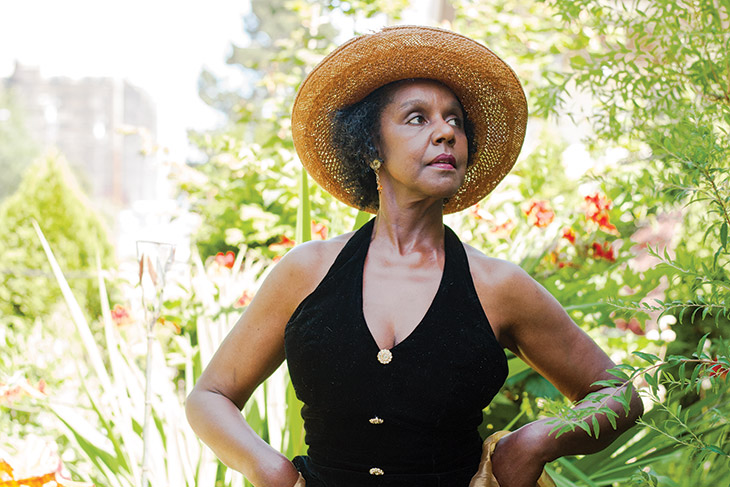 C. Rosalind Bell in her garden. Photo by Elizabeth Crook

C. Rosalind Bell is a writer and stage director.

Writing out of place allows for distance, and rumination, rolling the world around until emerges out of the darkness a something that is useful, if not perfect and far from it.

When Claude Purdy and I left New Orleans for the Pacific Northwest, it was 1995, and to Seattle we were headed. In my early twenties, I’d succumbed to the magic. I’d lived a thousand years in that place one year and ached to return.

My father died. Nine months later, my mother. They were our reason for making house in New Orleans: to be close to them, to help Mama with Daddy’s care. When the world burst wide open a second time, it was time to hit the road.

“I already know where you want to go.” That’s Claude.

In Seattle I’d found elder black men and women who reminded me of home and they were adventurers, pulling up stakes in the 1880s for points north and west. Steel-hard work of hands that bore Mississippi or Louisiana, Texas, Alabama, the Carolinas.

The 15 years I’d been away had made beautiful-view housing unavailable to us. I was surprised when Claude looked out from under his glasses, holding the P-I’s classified section aloft, “What about Tacoma?” I shrugged. He cajoled. Was there water? Were the views to my liking? He already knew. We left Seattle, opened our hearts. Nearly immediately the old girl turned on her charm. Tacoma gave us the vapors.

My partner, Claude, a theater director, worked at theaters across the country and abroad. By the time we reached Tacoma I’d been working alongside him for nearly 10 years. Now I was devoting most of my time to my writing.

When, after a few years, our settling into Tacoma upended, I stayed put. Gone was the always-present editor of my work. The person whose laugh I waited for when I knew he’d reached a certain part of a screenplay I’d put on his desk before bed. Gone were the copious notes, the long talks about this scene or that. The denouement. The stakes. His impenetrable focus. My pushback. I sought solace in what I knew how to do, what I had to do. I wrote. I found writers.

The New Orleans Monologues, stories of Katrina; 1620 BANK STREET, about integration; Under the Circumstances, interracial sisterhood split by the “n” word; and now The Louisiana Project. All works brought out of me with the legion of support from far and wide and long and deep. Friendships, new and old, strangers, well-wishers. Tacoma.

My Bayou state is steeped in the blood of black people brought to America to do white people’s work. For free. Without freedom. Here, I have the freedom of distance to write the world enslavement wrought. Louisiana now boasts a multi-million dollar tourism industry promoting a kind of “plantation porn” wherein folks from all over the world are ferried along to one compound after another, each make-believing enslavement never existed. Very few tour guides go near the truth, the whitewashing complete. The paying customer is wowed by the mansion’s ostentation; duped by the erasure of the whip and the chain. My Louisiana project tells another story.

The University of Puget Sound has been a steadfast supporter of my work since its first Race & Pedagogy Conference in 2006. Conference co-director Professor Dexter Gordon introduced me to then-chair of the theatre department, Professor Geoff Proehl, who dramaturged The New Orleans Monologues into being. For the lead, Professor Gordon had one name: Professor Grace Livingston. Lightning.

We’re back in September with my Louisiana project. Tacoma is a writer’s town. It’s true, writers need pen and paper. They also need huge chunks of noodling time, of sequester, a void in which to wander. And just as much we need community. I am lucky and grateful to have a posse who want to read what I write. They are mostly not writers. They are mostly sane. They bolster. They chide. They show up. They help me do the same.