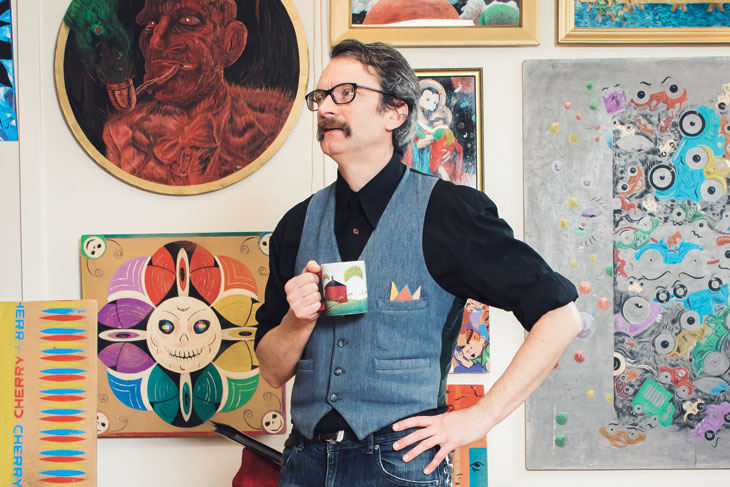 WHO Jeremy Eaton, the 54-year-old painter, sculptor, graphic novelist and vintage enthusiast. Eaton was born in England, raised in Scotland and emigrated to America in 1971. He arrived in Seattle in ’94 at the request of his publisher Fantagraphics. “I caught the midnight train from Pittsburgh and have been here ever since, my longest stay in any one place.”

THE LOOK “Practical, 1968. Working-class artist. I dress myself as I dress my art, with a love of burnish and wrinkle, the only difference being my attire is built of classically neutral tones, my art from a more primary palette. I draw from my roots in ’60s working-class Britain, manifest through a life’s education in the outsider arts of living in America as a self-proclaimed punk, one ear to the Beats, one shoe stuck in the door of surrealism.”

UP NEXT Saturdays and Sundays from noon to 6 p.m., Eaton hosts an open house at his studio (521 NW 43rd Street). This month he’s exhibiting a series of paintings titled Seattle 1998, featuring the “lost populist temples of that era’s regionalism”—vanished landmarks like Sunset Bowl and the Lusty Lady.