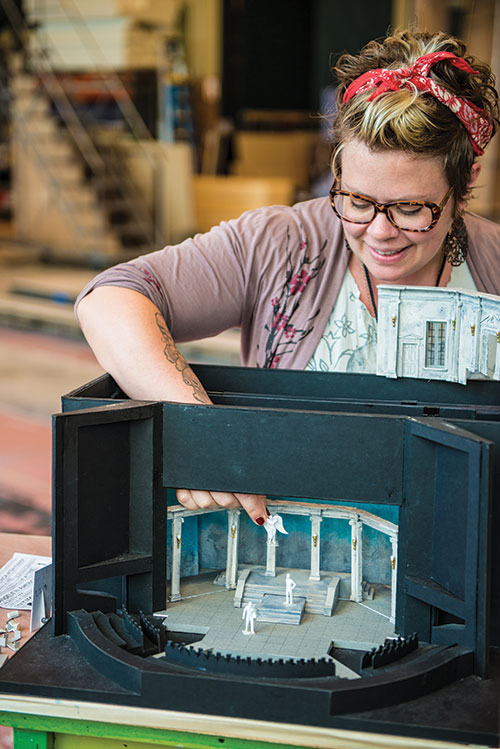 Jennifer Zeyl is taking on the challenge of a professional lifetime as the scenic designer and production manager for Intiman Theatre Festival’s production of Angels in America, Tony Kushner’s two-part dramatic fantasia set in Reagan-era, AIDS-ravaged New York City. There are some unique challenges to designing this seven-plus hour epic of Part One: Millennium Approaches and Part Two: Perestroika. City Arts chatted with Zeyl about how she approaches a mammoth project that including burning books and flying angels.

[Intiman artistic director] Andrew Russell asked you to work on Angels over a year ago. Were you on board immediately?

Oh yeah. I’ve been waiting 20 years to design these plays. Plays like this that are really hugely epic and rarely done—like you don’t really get a chance to design the Ring cycle because Tom Lynch designed and it just gets remounted, even though this is what I consider to be the American Ring cycle of straight plays, for sure, pound for pound in terms of spectacle and content and epic-ness and everything. They’re just not commonly done. Like I will design all of the major Shakespeares by the time I’m 50. I’ve designed Hedda Gabler three times. I’ve been extremely fortunate and also extremely aggressive in acquiring the design jobs that I want. There are certain plays that if I hear someone is doing it in town, I’m like must acquire and this is definitely at the absolute top of that list.

Yeah, this is the kind of show you have to clear-cut a lot of area around, because it takes so much complete focus and attention. It’s like someone gives you a fuckin orchid and anything could kill it, so you’re like ‘Oh my god I have to get rid of all my other houseplants because they’re gonna take the orchid’s air.’ It’s kind of like that. Once I knew that I was going to be doing this, I dropped four other shows that were around it. First you have to make the space for it, and then you have to give yourself over to it.

How did you first start working on the design concept?

So one of my best friends, Robert Aguilar, is designing the lights. I’ve designed maybe 25 shows with Robert. We were both really familiar with the plays, so back in November or December we did a two-day lock-in at Canoe Social Club. We watched How to Survive a Plague, which is an amazing documentary about the HIV crisis in ’84 and ’85 and the start of ACT UP in New York. We watched a lot of things and looked at different shapes and architecture, anything we thought might have some visual resonance with what we were doing, even if it was really far afield. One of my favorite things about Robert—in addition to the fact that he’s also my husband’s best friend, he can talk me off of any kind of ledge and he’s the only person I can shop retail with—is that he’s a great theatre artist. He commits so much time to the process of design. It’s very rare in lighting designers, because the intense time of their focus happens after I’ve done my work, and after the play has largely been staged. It’s really pretty difficult to get a lot of lighting designers in on the ground floor.

What are some of the unusual challenges of designing Angels?

Between the two plays there are a totally of 84 scenes, they’re very quick, mostly two or three people—the maximum number of people in the same scene is three people, and that’s very rare. There are a total of eight actors and you never see them all on stage until act four of Perestroika. So it’s very light on its feet, and because the plays are so long, anything that gets in the way of the words or slows anything down is dead to me. I’m cutting it. I will fucking cut anything.

Tell me about your thought process behind the finished design.

One of the most important things to me was that we could understand the space to be both interior and exterior at times, and even in a play as fantastic as this is I need something architecturally naturalistic to ground it. It can’t just be like floating, two-dimensional purple elements, do you know what I mean? For me, it needs to not draw focus to itself and it needs to not ask more questions than it answers. I mean if I was doing some crazy-ass dance piece with Zoe and Juniper again I might do a bunch of nonsensical shit because they love that, but for this I needed to punctuate and contain, especially for Millennium.

The shape started revealing itself pretty early on, but I wasn’t contented because it wasn’t referencing anything. I literally went back to my grad school textbooks, I shit you not—I was going Greek, I was getting into proportions. All our American colonial municipal buildings are very much based on Greek form. There’s a little bit of a marriage with Federal style stuff, but if you look at any bank or court or whatever that was built in the 18th century that’s what you’re looking at. That was something really interesting to me, because these plays are at times so much about laws and legislation and who the law is protecting—like at this point, the law is protecting [McCarthy-ite lawyer] Roy Cohn and not these people who are very, very sick.

I had this breakthrough moment with my assistant and I was like I’m haunted by a room that I’ve been in, and I can’t remember it. I was thinking of my early childhood because I grew up in DC and Virginia, so old structures have a lot of resonance with me. I kept describing it and then Jared was like, ‘Hold up, I think I’ve been in this building too.’ And I was like, ‘No, you’re just trying to gaslight me.’ But he thought it was the Assembly Room at Independence Hall in Philadelphia, and he was totally right. It’s the room that the Constitution was drafted in. And I was like, ‘Well I’ll be dipped in shit.’ So then he and I then had that thing, that grounding reference point that started to inform all of the detail choices, particularly for Part One. Because for Part Two, we’re removing the walls between the columns, so it’ll be this sort of open colonnade and off behind it are these turquoise cement walls that reach out of sightlines.

What are you most excited about finally seeing on stage?

Two things are at the top of that list for me. One is the burning book. That’s the choicest little bit of stage direction ever:

[Suddenly there is an astonishing blaze of light, a huge chord sounded by a gigantic choir, and a great book with steel pages mounted atop a molten-red pillar pops up from the floor. The book opens; there is a large Aleph inscribed on its pages, which bursts into flames. Immediately the book slams shut and disappears instantly under the floor as the lights become normal again. Emily notices none of this, writing. Prior is agog.]

You should have seen me the first time I read that, I was like ‘oh my fucking god!’ And then there’s the flight. I’m looking forward to the angel’s flight. I get to fly one of my best friends [actor Marya Sea Kaminski] on a string above this flaming book. It’s pretty good.

Angels in America is running in repertory Aug. 12–Sept. 21 at the Cornish Playhouse at Seattle Center.