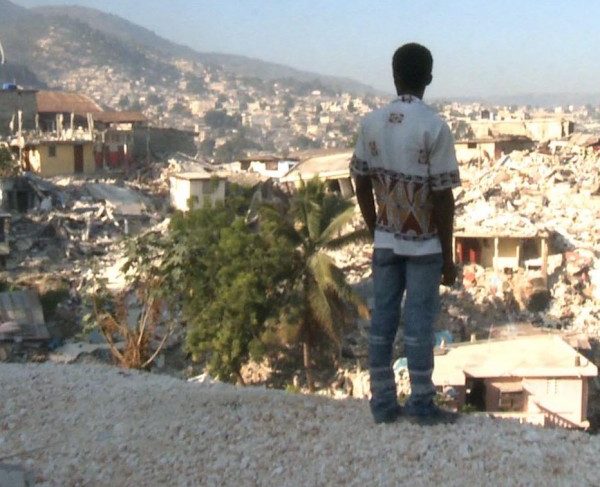 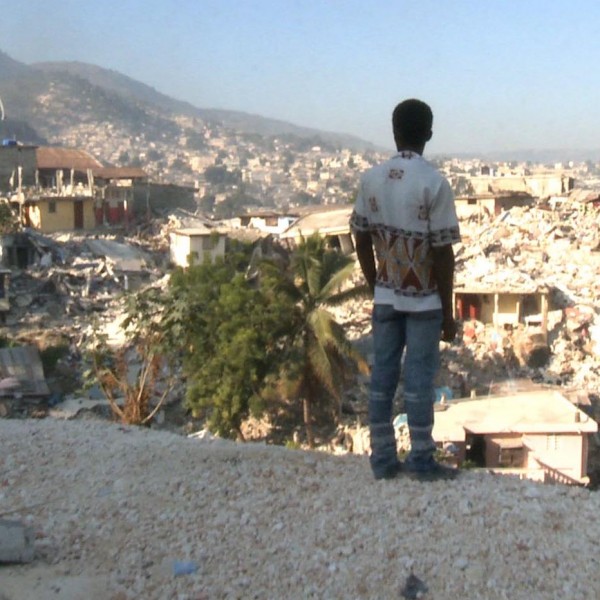 David Pierre-Louis is a Brooklyn-born, Seattle-based entrepreneur. Seattle’s music community might know him as the owner of LUCID, the University District jazz club and gallery he opened in November 2008 and closed in 2015. Since then, Pierre-Louis has been keeping busy as a documentary filmmaker.

When a massive 7.0 earthquake hit Haiti on January 12, 2010, Pierre-Louis traveled to a suburb of Port-au-Prince to try to find his mother amid the wreckage. On the flight down, he sat next to a freelance journalist named Elvis Gilmore, who asked if he could document Pierre-Louis’ journey. That happenstance meeting turned into an emotional five-year-long creative partnership that culminated in the film Kenbe Fem—a documentary about Pierre-Louis’ search for his family and his mission to help rebuild Haiti. The 60-minute film is being privately screened at venues across the country, including the Impact Hub in Pioneer Square on Thursday.

In addition to producing Kenbe Fem, Pierre-Louis has been spearheading a resource center near Port-au-Prince called Kay Tita, which translates as “Tita’s house,” named for his mother. The center will serve as a conduit for changemakers in Haiti, helping them to network and develop skills. The five-floor complex will include co-working space, classrooms, apartments and a garden—and it will be built according to the Living Building Challenge, a rigorous environmental rubric used by developers around the world to create spaces that produce more energy than they use.

Kenbe Fem has been a herculean and time-consuming project. Pierre-Louis took time out to talk with me about it via e-mail.

How are you doing these days? I know from first-hand experience that filmmaking can be incredibly draining no matter what the project is. I can only imagine how it must be telling a story that hits as close to home for you as this one.
I’m anxious, nervous, excited, humbled and, surprisingly, full of energy. It’s interesting to tell your story while it’s actually still unfolding in front of your eyes. It’s a very vulnerable space. My attitude is: Let’s tell this story, let’s share it and use it to evolve. Haiti’s problems won’t be resolved by waving a wand.

The media is not talking about Haiti so much now but there are still many people who were affected by the 2010 earthquake and who are still living in very compromised situations. The film challenges us to think about what could happen if there was a concerted effort to connect resource-poor communities in Haiti to the opportunities and networks that they need to thrive. I’m hoping people will view Haiti for what I’ve seen it as and what it truly is: a place of endless possibility and not a charity case.

I’m feeling optimistic that the vision we have for rebuilding our community through the eyes of our organization, Kay Tita, will materialize into something greater than we could even imagine. I’m glad that I’ve been able to allow my thoughts and my stance in life to turn into action.

Tell me a bit about the place that Haiti holds in your biography, your memory and your heart. How has Haiti informed the work you’ve done with the jazz club LUCID and as a community figure in Seattle?
Well, my mother moved back to Haiti in 2002 and since then Haiti has pulled and tugged at my heart, inspiring me to be more involved. In 2004, I visited Haiti for the first time and I knew that I wanted to be more engaged with creating space. My vision was to build a community cyber center. But it became a fleeting thought when I got back to the U.S. and was finishing up my degree at Bethune-Cookman University. I believe that my work in the community here in Seattle was practice for the work ahead of me in Port-au-Prince.

Most Americans watched 9/11 unfold on the television screen—the same could be said of Hurricane Katrina and the BP oil spill. Do you find yourself referring to other kinds of tragedies that people may be familiar with to make that emotional connection? How has it been creating space as a filmmaker and entrepreneur relaying the experience of having loved ones in that earthquake through your personal lens?
I don’t actually need to refer to other tragedies to make an emotional connection. When you witness what some of us experienced in Haiti, it sticks with you. The stench of death seeping from crushed buildings, bodies being removed by heavy machinery. There’s no way you can’t be constantly moved to create space. So to create space is what my life is about—not in the sense of housing and security, but more of a space where thoughts can materialize into solutions.

What kinds of technical hurdles did you have to climb in order to enter the world of filmmaking?
I met Elvis Gilmore when I was heading to Haiti to find my mom and to make sure she was ok. He was a freelance reporter from London who was intrigued and wanted to document the initial journey. When I returned to Seattle, I met Mark Goodnow, the director of Kenbe Fem. As a producer, my role has been very entrepreneurial. I’ve been behind the lens when I flew down to Haiti and we weren’t able to afford to fly anyone with me. I even operated a drone camera! This entire experience has made me appreciate every bit of the storytelling process.

As somebody who entered the medium in a somewhat unconventional way (you’re not a career filmmaker, but you’ve become a filmmaker nonetheless), do you draw inspiration from other media in your film work— literature, music, visual art?
I watch a lot of films from all type of genres. I’m most influenced by the independent scene. I had the privilege of working with Tim Vernon from Seattle’s Transmedia and Independent Film Festival and I was able to witness all sorts of films. Authenticity is something I wanted to express in Kenbe Fem. I didn’t want the documentary to be very fact heavy, so we applied artistic elements all throughout the film.

One scene that I’m extremely proud of is the dance scene that was shot and edited by Bart Mervil. He’s been a filmmaker for over 20 years and he recently co-founded an organization called MUCE, the Miami Urban Contemporary Experience. They develop pop-up artistic exhibits to preserve local artistic heritage.

When I owned LUCID, I was so lucky to be surrounded by so many different creative voices and perspectives. I was always challenged with figuring out how to best create space for the artists. I had the ability to feature work from some of these folks like Ayron Jones, Black Stax, Owuor Arunga, Jaz Lund, Martin Sepulveda, Naomi Wachira and many more. They all had their influence on the film musically in some way.

I believe there are influences coming from all over these days. It doesn’t matter where you are: If you’re paying attention, you know that we are all telling a story. Just because it’s not on the big screen doesn’t mean it’s not happening.

Kenbe Fem screens Thursday, April 6 at the Impact Hub in Seattle. Attendees are encouraged to donate $25 at the screening to support rebuilding efforts in Haiti. For more info on Pierre-Louis’s efforts ther, follow Kay Tita on Facebook and Twitter.