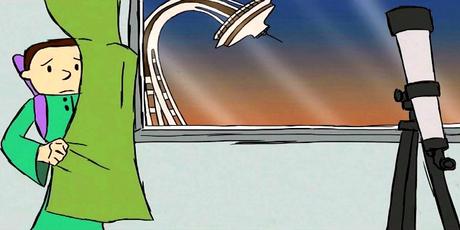 Anyone who insists there’s no audience for short films outside of YouTube need look no further than the SIFF Film Center this Saturday and Sunday for a healthy rebuttal to that notion.

The fifth-annual Seattle Shorts Film Festival has technically sold out, though the Fest’s website addresses the possibility of tickets at the door. Based on the quality of the selections, there are heaps of good reasons to take a chance on a last-minute admission. In the spirit of short-film brevity, here’s our spoiler-free capsule rundown on the shorts we caught as of press time.

The Haircut
True Blood’s Bailey Noble plays a young woman entering her first day of Army boot camp circa 1976, in this slick but engaging vignette that gets its period details subtly right.

The Apple Tree
It’s best to reveal as little as possible about Scott Storm’s animated coming-of-age story. A young boy learns some hard lessons on a jaunt to his favorite corner of the woods, an adventure wrought on a gorgeously-rendered traditional cel animation canvas.

Signs Everywhere
The concept behind Director Julio Ramirez’s short is as one-note as you can get (see title), but it’s well-acted, emotionally involving, and delivered with an artful and winning magical-realist touch.

D.Asian
Coming-of-age stories figure strongly in the 2015 Seattle Shorts Film Festival, but this Sarah Smith-directed short about a fourth-grader establishing his identity during an SAT test is one of the funniest.

Election Night
The family of a prospective senator awaits election results amidst a flurry of familial revelations in Tessa Blake’s short comedy. There’s a nice twist at the end, and good performances by Peri Gilpin and Jake Johannsen, but the film lays out its pro-tolerance message with a somewhat heavy hand.

Midnight Tourist
The Space Needle becomes the metaphoric and literal vehicle for one young boy’s flights of fancy in this enchanting animated piece directed by Seattle-based Koray Kocaturk.

Even the Walls
Saman Maydani’s and Sarah Kuck’s intimate, affecting documentary about the toll of gentrification on Yesler Terrace and some of its residents wowed audiences at SIFF 2015, and it remains a powerful piece of work.

More information, and a complete schedule, are available at www.seattleshort.org.