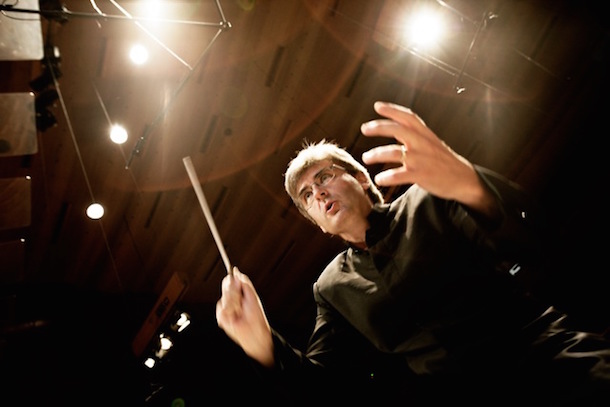 Wildly popular among classical music lovers and among the first composers newcomers to the genre learn to love, Rachmaninoff is known for the great sweep of lush romanticism that pervades his music and for the breathtaking virtuosic roles he gives to the pianists in his concertos.

But there’s another side to his music, evident only if you look for it. On Thursday night, this week’s Masterworks series concert at Benaroya Hall brought to the fore Rachmaninoff’s musical debt to Russian Orthodox chant, the age-old unaccompanied church music that continues to this day—and for which Rachmaninoff wrote his All-Night Vespers.

The Seattle Symphony had the brilliant idea of beginning the two halves of its all-Rachmaninoff program with performances of that Orthodox chant. It brought in Cappella Romana, the prime and scholarly exponent of that chant in this hemisphere, to sing for a few minutes from the front of the second tier. The orchestra dove in straight from there, first with the less familiar Piano Concerto No. 1 in F-Sharp Minor and, after intermission, the Symphony No. 2 in E Minor.

One had to listen carefully to the two Rachmaninoff works for those long melodic lines within a fairly narrow range, but the chant influence was most obvious at the beginning of the symphony, where the steady, strong and rumbling bass line underpinned those long melismatic lines.

This approach wasn’t the only thing that was fresh to many Rachmaninoff devotees. Principal guest conductor Thomas Dausgaard was on the podium, and his interpretation belied many of the familiar shibboleths about Rachmaninoff’s music. There was romanticism, for sure, and some lushness, but the whole sense in both works was of an airiness we never associate with them.

Dausgaard seemed in complete accord with pianist Alexander Melnikov whose extraordinary technical virtuosity was always subservient to what the music was saying. This was the composer’s first effort at a piano concerto, written when Rachmaninoff was 17 and then completely rewritten two decades later, but it’s still the least played of the four piano concertos he wrote—which is our loss, because it’s an exciting work requiring huge pianistic skills. From the lightest feathery runs changing in an instant to crashing chords to limpid ethereal moments to exciting, emphatic and very, very fast roulades of notes, Melnikov’s hands were relaxed and easy on the keys. Dausgaard had the orchestra with him every moment, sometimes with his head turned to watch Melnikov’s hands so that he could bring the orchestra in at the right nano-second. Brought back for three standing ovations, the pianist obliged with a very appropriate encore, Rachmaninoff’s Prelude Op. 32 No.5.

As if this emotionally wringing and beautiful performance wasn’t enough to satisfy music appetites, we had the big symphony to follow. Dausgaard is a dynamic conductor, fascinating to watch. He is rarely still on the podium, but the way he uses his arms, head, body, all make it crystal clear just what he wants from whomever in the orchestra. What mood he was after at any moment was obvious, and changed like lightning with the music. There would be moments of extreme frenzy and suddenly complete hush, a fluid flow, then a brass crash, but always there was a lightness that pervaded the whole. Principal clarinet Ben Lulich received a solo bow at the end for his long, beautifully shaped solo in the second movement.

It was a breathtaking performance, one of those special ones you don’t easily forget. Dausgaard came back several times to tumultuous applause, including from the orchestra, who gave him a solo bow. This program is repeated Saturday night, and he’ll be welcomed back in June for another program including a U.S premiere.