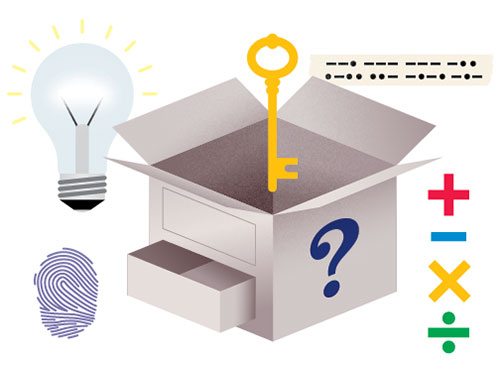 “People get kind of crazy in there,” Puzzle Break co-founder Lindsay Morse says, gesturing toward a closed door in this warehouse bathed in fluorescent light. On the other side of the door, she has set up something that looks like a hoarder’s lightly tidied living room, full of lockboxes, trinket-loaded shelves, curtains covered in iconography and much more. The spacious, well-lit room straddles the line between order and chaos—and for the game that takes place inside, that’s the whole point.

Every weekend, Morse locks 12 people at a time in each of Puzzle Break’s two rooms, then gives them an hour to find a key that will let them out. The scenario doesn’t always bring out the best in its players. “They know they have a time limit, so they get excited,” Morse says. “They rush. Sometimes they get careless and break things.”

The rooms have been redesigned with durability in mind since Puzzle Break debuted in the Pike-Pine corridor, next door to Moe Bar, in December of last year. But Morse and co-founder Nate Martin haven’t made the puzzles any easier. “Maybe 25 percent of players actually solve the puzzle” within the hour time limit, Morse estimates, but she insists teams have a good time whether they solve the puzzle or not.

“Half of Puzzle Break is finding stuff,” Morse says. “You don’t have to be good at puzzles to find hidden clues, and people are better at solving this stuff than they expect.” Morse has only noticed one exception: Groups who attend as part of corporate team-building events—she says she sees a lot of those—are some of the worst teams. “They need it, right?” she says.

Morse and Martin met years ago through circles of co-workers—professors at the University of Puget Sound and video game designers at Electronic Arts, respectively—and found a common interest in elaborate puzzles. They’d heard about weird, exotic puzzle rooms popping up in Japan, England and Hungary, and were shocked to realize no American companies had followed suit.

The most challenging part is surprising new players and forcing them to team up for an hour. “A puzzle-loving team that can’t communicate will lose,” Morse says.

Puzzle Room fans already want more such surprises. The operation added a second puzzle option in March, and plans to replace its original, astrology-themed puzzle by the end of this year with a brand-new puzzle, complete with elaborate designs and custom circuitry systems. Morse hopes the results will eclipse the “staid” aesthetic of her original creation—and that they’ll withstand the abuse of thousands of excited players.