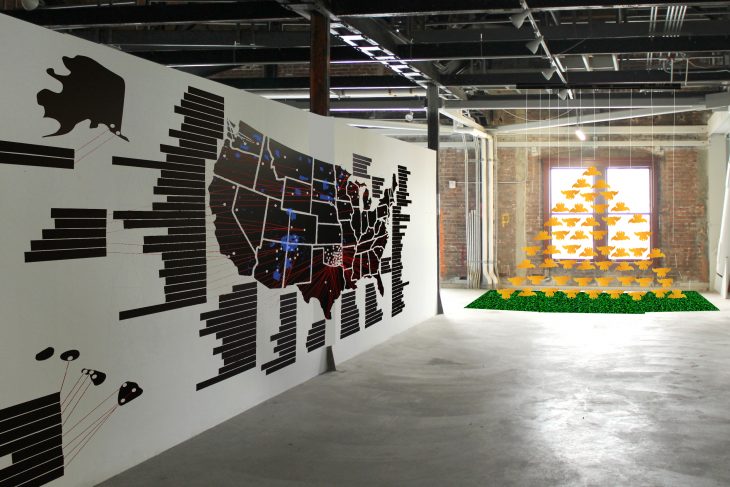 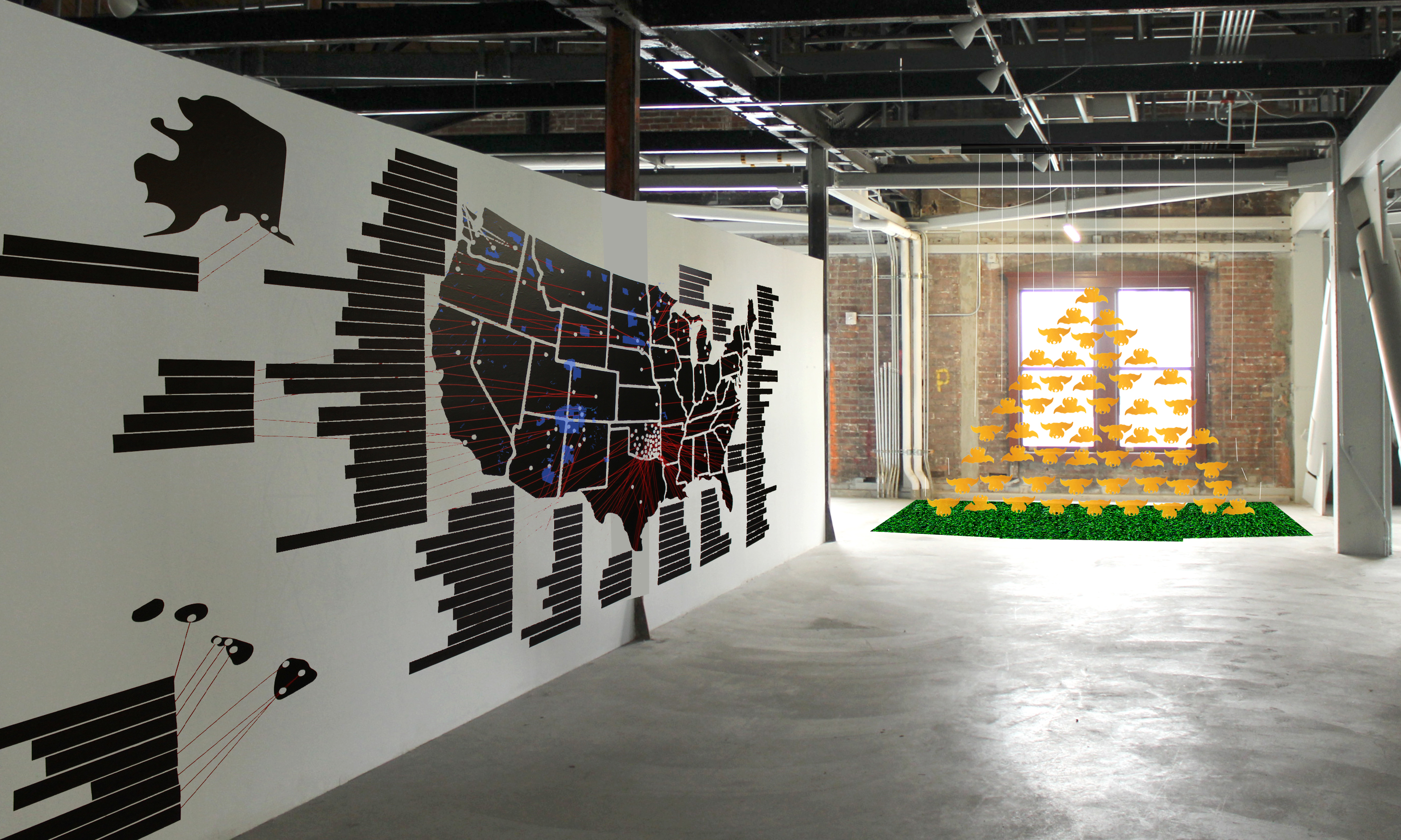 Last week a heatwave rolled over Seattle. The high temperatures were hard on many, but to artist Ryan Feddersen, they posed a particular problem: One of her recent installations—a map of the United States, rendered in black and stretching out over a huge wall—is made of thermochromic black ink. It’s an interactive piece intended to respond to the physical touch. When activated by the body heat of visitors (who are encouraged to touch and rub the infographic), portions of text are revealed.

On the night of the opening reception of the exhibition BorderLands at King Street Station, Feddersen’s piece, titled “Kill the Indian, Save the Man,” overheated in the heavy air and—without the intended aid of audience intervention—exposed a long list of Indian boarding schools where Native American children were, often forcibly, sent during the 19th and 20th century, with the intent of “disciplining” their language, beliefs and dress out of them.

“Kill the Indian, Save the Man” is one of nine explicitly political installations in this group exhibition organized by the Seattle Office of Arts & Culture, a powerful and at times conceptually robust show from mostly Seattle-based artists, including Inye Wokoma, Henry Luke, Satpreet Kahlon and Carina A. Del Rosario. The show unabashedly tackles topics of identity, belonging, nationalism, racism, allegiance and resistance. 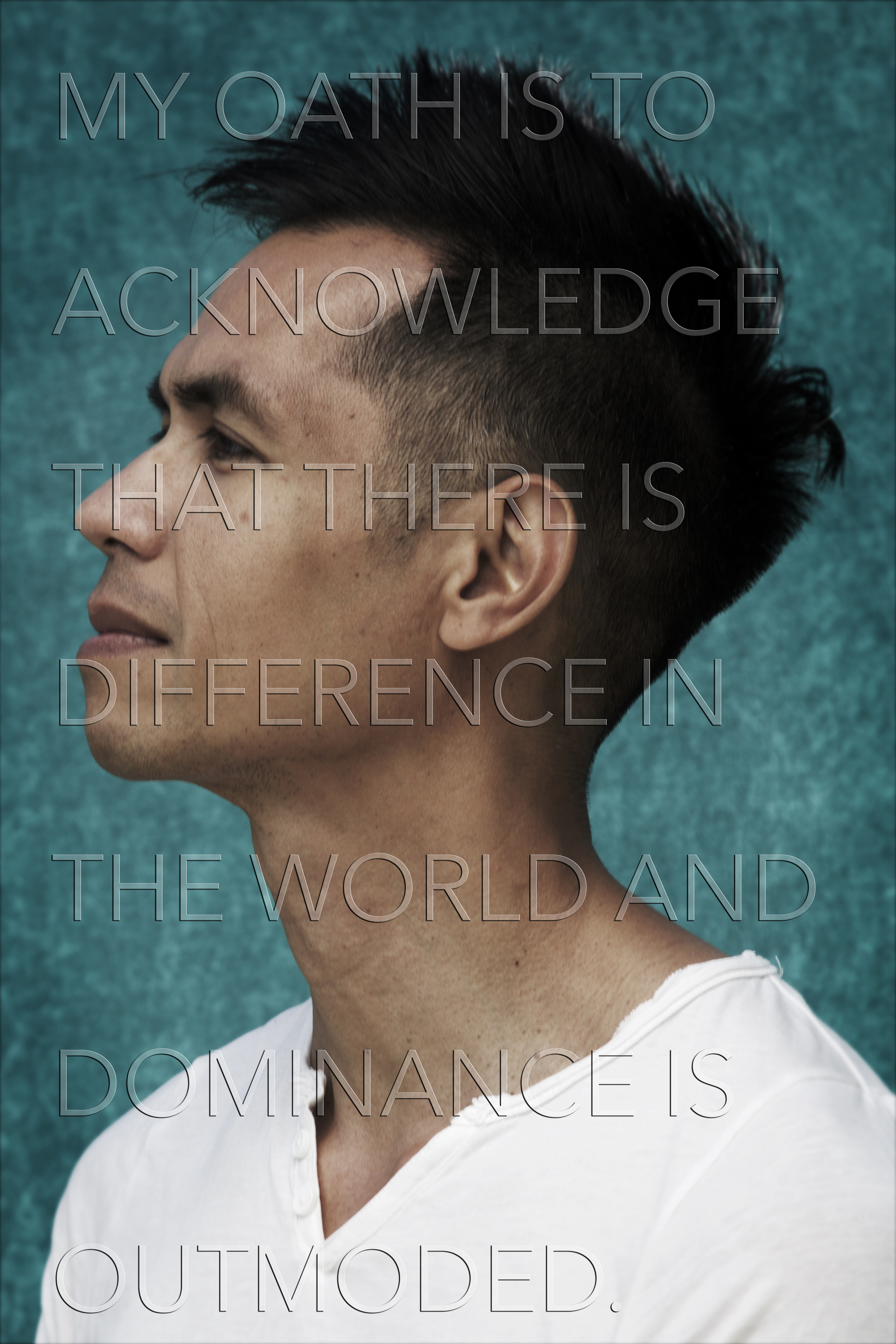 In “Allegiance Reset,” Inye Wokoma explores the double binds in which recent U.S. immigrants find themselves: stuck between old and new homes and made to pledge allegiance to a new country without forsaking their culture. The Seattle-based artist asked new citizens to create their own “Naturalization Oath of Allegiance.” On a bright poster, Hodan Hassan, a Somali woman with squared glasses and dark, proud eyes stares out of the frame. Her oath is layered on the photo in semi-transparent letters: “I swear to be a world citizen. To be aware of the status of the United States in the world, the good the bad and the ugly.”

Anida Yoeu Ali, a first-generation Muslim Khmer woman born in Cambodia and raised in Chicago, delves deeper into the increasing hostility many Muslims in Europe and the U.S. face. “The Red Chador” is an ongoing series of performance, video and photography work in which Ali walks through parts of Paris, Seattle and other cities in a red sequined headdress. By veiling herself in this extremely visible manner, Ali exaggerates the ways in which these headdresses make Muslim women clearly identifiable and subject to scrutiny and xenophobia. In King Street Station, her red chador echoes the red of the more than a dozen U.S. flags surrounding the video of her performances.

National flags are potent, explicit symbols. Integrating them into art is risky, often outright cliché. Mexican-American artist Pedro Lasch avoids falling into this trap with “Flag Fusions,” an installation of flags that weaves through the show. The composite flags each combine the national symbol of four nations, selected from an alphabetical list. The flags are the artist’s medium, but the real raw materials are the visitor’s reactions, rituals, languages and the history and ideas connected to them. Visually speaking, a flag bearing Malawi’s and Macedonia’s suns over the stripes of Luxembourg and Madagascar is only superficially interesting. Luxembourg sharing space with two countries with only a fraction of that country’s GDP, is something else. 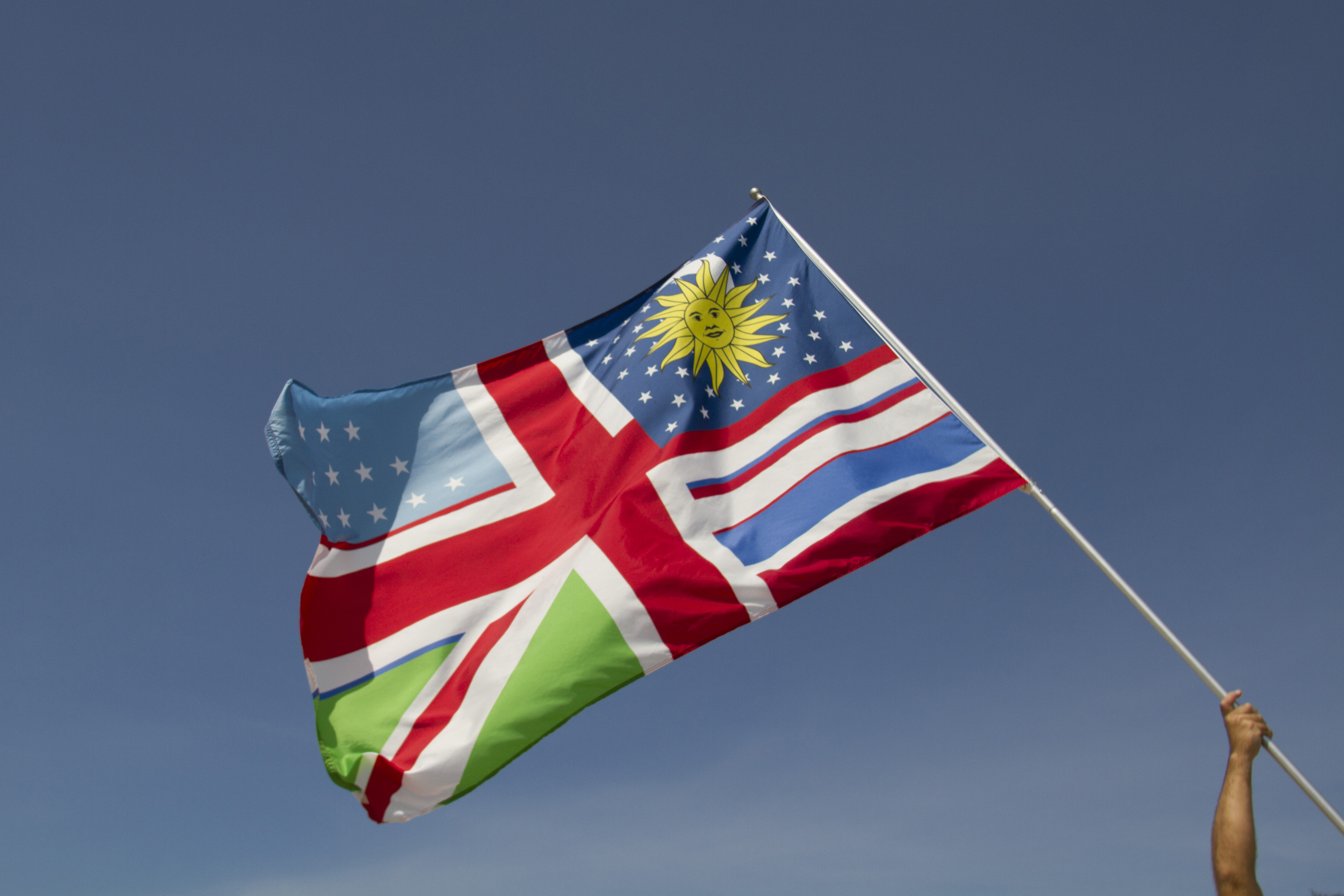 The 48 flags are part of the yearlong project part of a larger oeuvre and social practice series titled Abstract Nationalism & National Abstraction. Lasch’s long labor of love, shown at prestigious national art shows such as documenta and the Venice Biennial, also includes a pluralistic performance in which the national anthems from each nation are sung live in the language of the country that follows it alphabetically, creating politically interesting dissonances (such as the U.S. anthem sung in Spanish from Uruguay). Adding such a performance to the roster of events during the exhibition would be an ideal addition to the flags hanging rather limply at King Street Station.

In a bright sun-lit corner of the gallery space, a soft membrane of white voile drops down from the ceiling, stretching out over the floor like parchment paper waiting to be read. Black thread squirms and flounders from their path—the outline of the block letters the artist, Satpreet Kahlon, machine-sewed on the veil forming the central scene of the installation “Self as State/Self as Self.” 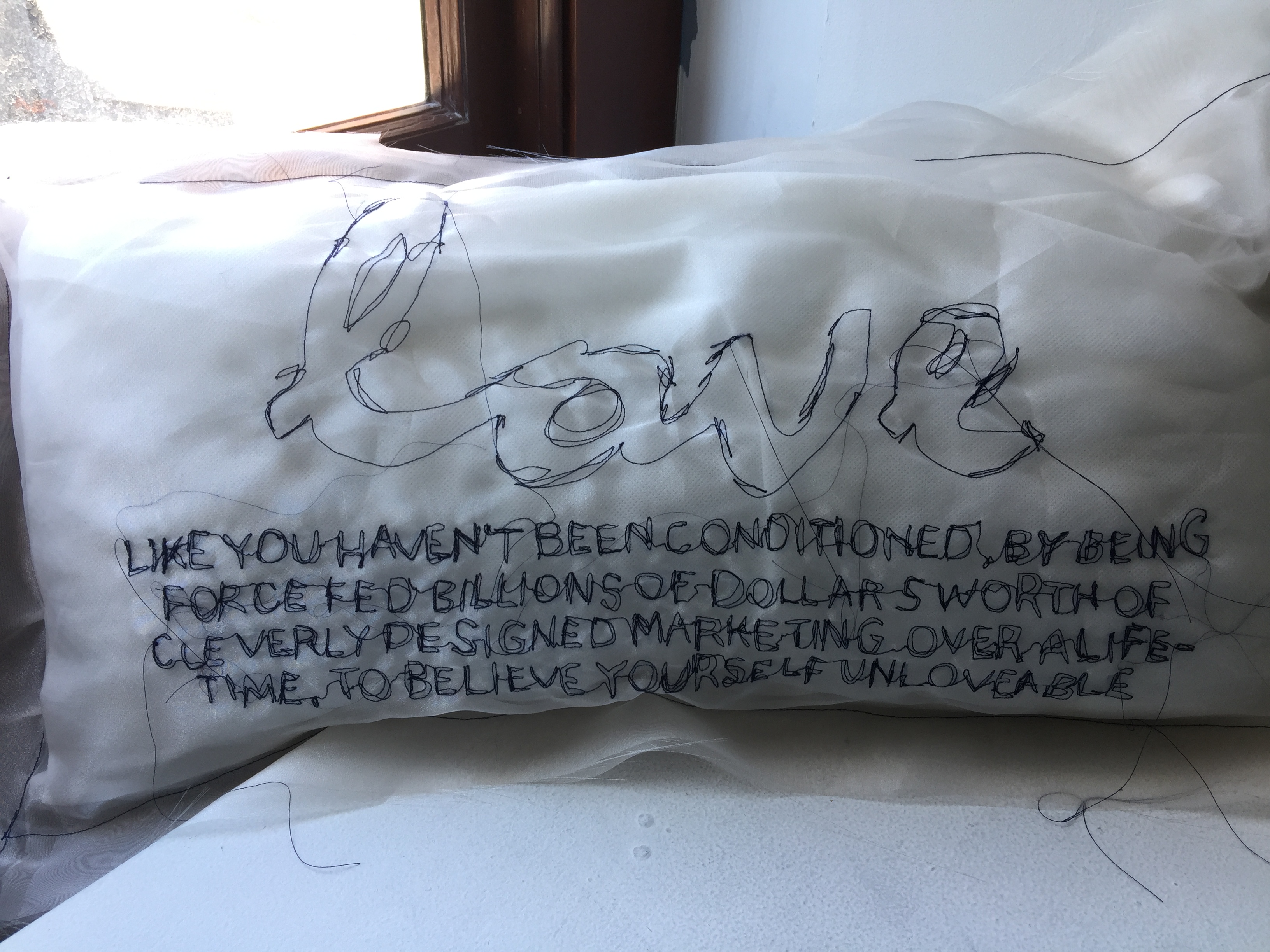 Initially, Kahlon set out to explore the concept of nationalism as both the power of and pride in the state, and the fight for more rights for marginalized communities, questions how have we internalized those seemingly opposing forces in a capitalist system that distracts us with conflict and bribes us with endless stuff.

Upon closer inspection, the words, like the black thread that forms them, venture into new territory. Through a wall text written by hand in graphite and the sewing of the banner—totaling more than 70 hours of toiling—Kahlon wonders whether an art show can mention itself in the same breath as “resistance!” when it’s made and shown in the shadow of an art fair, a symptom of the idea that art is only as valuable as its wealthy buyers. 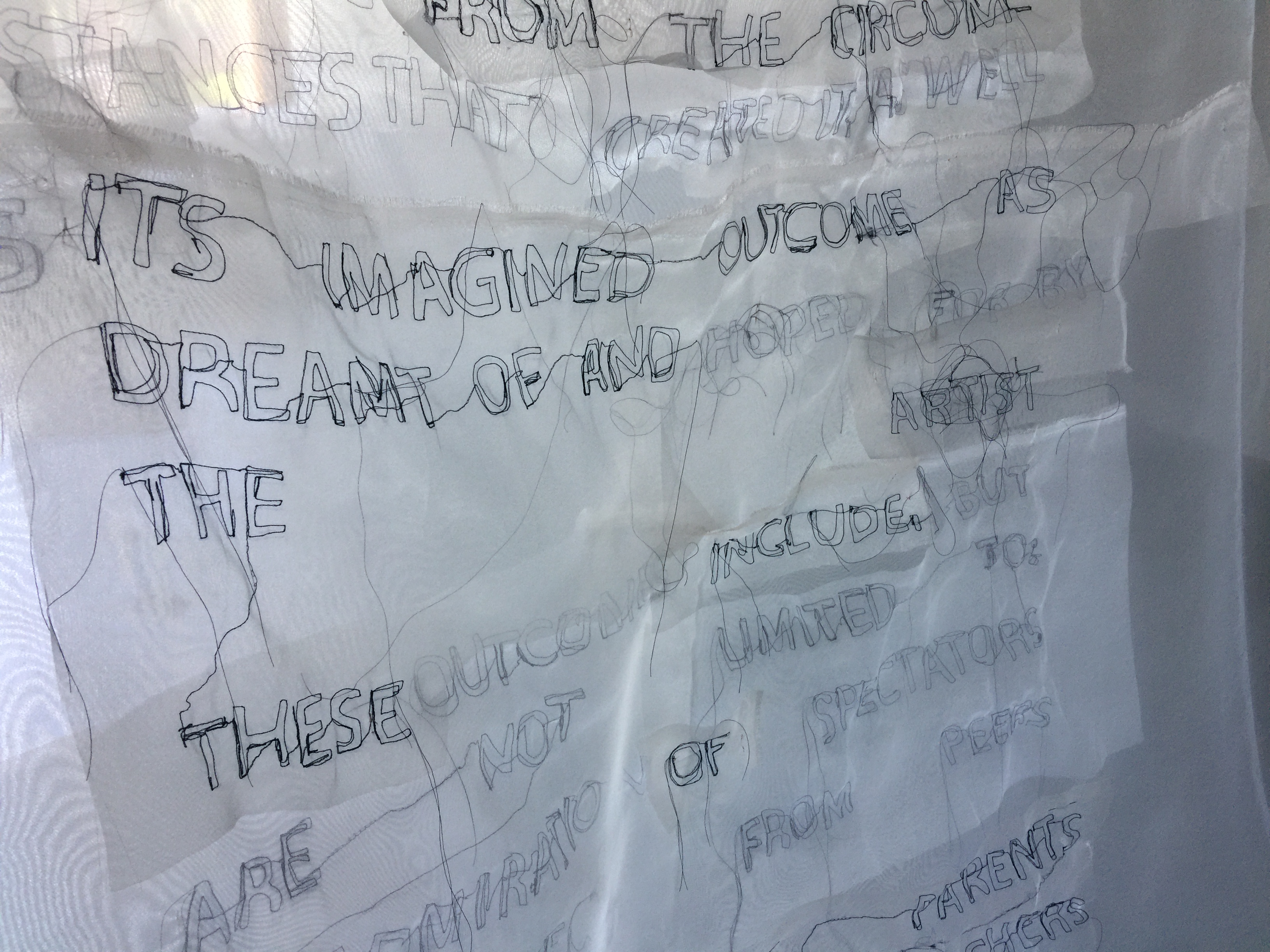 The installation is possibly the show’s best: gorgeous in execution, merciless in its critique. Her carrot-and-stick method will leave you laughing (however sourly) and examining your own complicity. The most masterly elements of the work, however, are three embroidered pillows, each offering a critique on the subjects of life, love and laughter. The generic three-part slogan speaks to a shared desire for properity while pointing to internalized conditions impeding this. Love, reads one, like you haven’t been conditioned by being force-fed billions of dollars worth of cleverly designed marketing over a lifetime to believe yourself invaluable.

With such poetic, poignant offerings, BorderLands deals with nationalism, allegiance and resistance. The most arresting works on show tackle the flippant use of language—words often thrown around carelessly since last Nov. 8. What do these signifiers mean to the people who saw their land stolen, to the new arrivals in a nation of immigrants and, finally, to the art world? Some of the most impressive works on view—including Feddersen’s and Kahlon’s—ultimately question the enduring complicity in a system that feeds and sells us a too-easily digestible and unchallenged story about identity.

BorderLands runs through Oct. 29. Ryan Feddersen will take about her work on Sept. 9 at 3:30 p.m. For more info and other events, including lectures and workshops by Imani Sims and Henry Luke, visit seattle.gov/arts/borderlands.