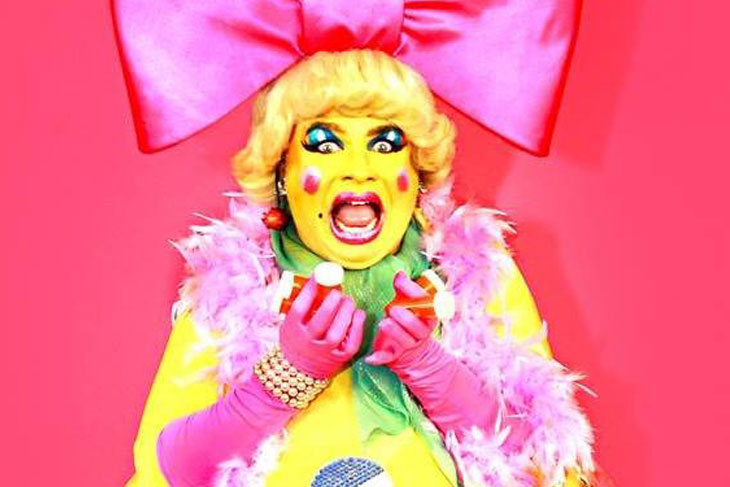 Natalie Singer reads from and discusses her memoir California Calling, which Elliott Bay Book Company calls “a lyrical self-interrogation of obsession, emigration, and identity.” The book follows her childhood emigration from Montreal to the Bay Area, the strangeness of American high schools, a summer spent tracing a serial killer through Gold Country and the events that lead Singer to a career in journalism. —Sarah Galvin
Elliott Bay Book Co.

In the mood for some old-school cabaret glamour run through an 8-bit blender and pickled in vodka? Ms. Pak-Man (Scott Shoemaker, a Seattle performer you should never miss), that pill-popping faded star of ’80s arcades, is back again to share more of her sordid life through songs and stories. Runs through March 17. —Gemma Wilson
Re-bar

The music of Russian-born, Berlin-based Mary Ocher is an unmissable arc weld of Grace Jones, Siouxsie Sioux and performance-art absurdism. Seattle’s own Spider Ferns have been taking their fetching brand of trip-hop into discoteque-worthy directions of late and fellow Seattleite Katie Kuffel backs her chameleonic pop with a serious set of pipes. —Tony Kay
Central Saloon

Amidst all the ’90s Britpop bands capturing Anglophiles’ imaginations back in the day, Supergrass were among the most underrated (and best), partly thanks to frontman Gaz Coombes. His mastery of everything from the fizzy Buzzcocks to legit pop songcraft should be a treat to hear solo. —Tony Kay
Columbia City Theater

New Orleans has Mardi Gras; Seattle has Balkan Night. The common thread in this inexact comparison is big brass bands playing raucous music to exuberant revelers who are prone to dance in circles. Spread across three stages at the St. Demetrios Church in Montlake, this year’s Balkan Night will see a wide span of performers plus tons of food, a fair amount of booze and plenty of high-energy good cheer. —Jonathan Zwickel
St. Demetrios Hall

The dumpling diaspora spreads far and wide, from the pelmeni and piroshki of Eastern Europe to the empanadas of South America to the xiaolongbao of China and the gyoza of Japan. All of them and more—some 20 kitchens in all—will represent at the second-annual Dumpling Fest, convened by Tom Douglas at his Palace Ballroom under the Monorail. Beverages adult and otherwise will flow, DJs will spin killer cuts and people will eat more than they should. —Jonathan Zwickel
Palace Ballroom

Open Books staff discuss the work of Pulitzer-winner Tyehimba Jess, author of Olio and Leadbelly, which won the 2004 National Poetry Review Series, and reflect on his reading for the Seattle Arts and Lectures series, which take place earlier in the week (March 4). —Sarah Galvin
Open Books