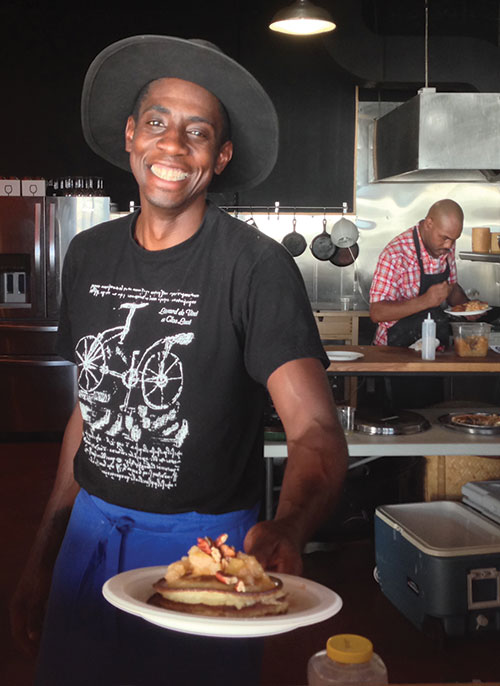 Goddamn the ascendance of restaurant brunch! The first meal of any awesome Sunday is now way too anxious. Seattle’s ever-expanding brunch-industrial complex has turned what should be a mellow gustatory sojourn into an over-caffeinated arms race toward maximum trendiness.

Morning Star Café is a graceful release from brunch-related pressure. The pop-up series launched last year by chef Tarik Abdullah has outgrown its early home at Hillman City’s cozy Tin Umbrella Coffee Roasters and is finding quarter at various offbeat locales around South Seattle. On a recent Sunday, for the second weekend in a row, Abdullah and his partner Jimaine Miller (aka the Turnover King, aka Tha Def Chef) worked within the kitchen at Jaam Rek Studios on 20th and Jackson.

The itinerant nature of Abdullah’s project ensures its paucity of pretense: The focus is on food and ambiance, not the line out the door that serves as a beacon to mindless brunch-zombies at more established places. Abdullah and Miller serve comfort foods—Miller’s Southern-style, Abdullah’s with a North African and Mediterranean flair. Outside Jaam Rek, tall chalkboard menus advertised lamb hash with zaatar, Indian coriander pancakes, shrimp and grits, and chicken and waffles.

October sunshine wafted through the open door. Café tables dotted the spare space, a dozen or so people seated in groups of conversation or hovering solo over newspapers. Windows aglow comprised one wall, another was exposed brick. A PA on a small stage played sinuous trip-hop and acid jazz.

Maybe it was the weather, but the whole room seemed to smile, as if happily resigned to indulge in a glorious autumn afternoon in Seattle. I ordered from a literally smiling counter person. The coffee came in a Styrofoam cup and was excellent. The chicken and waffles—crisp wings over a thick puff of waffle topped with spiced apple compote, Mrs. Butterworth’s and a side of smoked-gouda scrambled eggs—came on a paper plate with bioplastic flatware and also was excellent. A fruit salad of melon and kiwi and slivered almonds went beyond fruit-salad expectations, sweetened with rose water and dusted with sumac, a mild spice that tickled the nose more than the tongue.

Wearing a wide grin, Abdullah came out from the kitchen to ask about my dish. I raved.

“It’s the bomb-diggity,” he replied.

Abdullah, 41, grew up in a Muslim family, among the smells and flavors of the Middle East. He cooked in kitchens around Seattle, first as a teen at Dick’s and Red Robin and more recently—and seriously—at Cicchetti. His original popup series, started in 2010, was named A DJ and a Cook, but a year ago the DJ moved to LA. The Cook kept the name and downshifted from elaborate, multi-coursed, wine-paired dinners to casual walk-up fare.

“It’s what the neighborhood wants,” he says. “Good food shouldn’t be just for people who can afford it. It doesn’t have to have über-crazy technique, it just needs to be well seasoned and special with a good energy behind it.”

Abdullah and Miller also run Midnight Mecca, a late-night popup at La Bodega in Pioneer Square that features Caribbean-style dishes and DJs likeOC Notes and Cat Harris-White of THEESatisfaction. He notifies fans of upcoming events via his website.

“It’s nothing over the top, just a good time,” Abdullah says. “We just wanna do things for our community and our people.”

A DJ & A Cook
adjandacook.wordpress.com