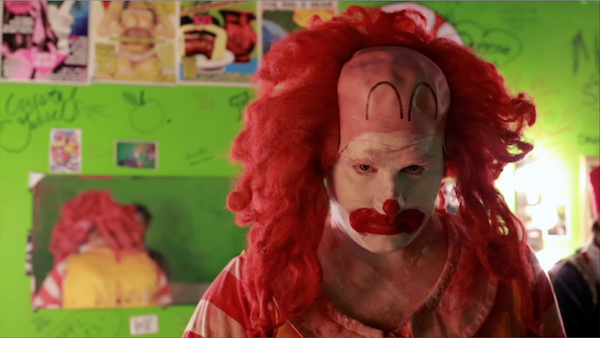 The 2015 documentary Bodyslam: Revenge of the Banana is doing a lot of things at once. The film, which did well at both Tribeca and SIFF and was just widely released on March 28, is about the rise, fall and rebirth of Seattle Semi-Pro Wrestling—a collection of hilarious and insane outcasts who have put on raggedy, profane “sports” exhibitions in the Northwest for over 15 years. It’s also a chronicle of one man’s dubious and misguided revenge, via the blind mechanics of civic bureaucracy, against the peers who rejected him. And it’s a touching story about a group of damaged people who managed to find a family in one another. For me, it’s an exploration of the pocket of Seattleites I’m most fond of: the weird, poor, often drunk people who don’t fit in anywhere else.

Directors Ryan Harvie and John Paul Horstmann keep a narrow and intimate focus for the first half of the film. We meet Paul Richards, a big, serious-looking man with a goatee and athletic gear. He speaks to the camera about his horrible childhood, growing up with a severe addict for a mother. Paul, the kid who “always got picked last for everything,” eventually finds a kind of acceptance as an adult with the SSP crew—particularly Josh Black, aka Ronald McFondle. Black also grew up as an outcast, rode the rails and spent time living on the street in his 20s. He takes Richards under his wing and shows him the SSP ropes. Soon, Richards is performing in front of rowdy, cheering crowds and soaking in the adulation (while dressed as a banana). The movie feels like it’s shaping up to be a grimy riff on inspirational sports story clichés. But that’s not what happens at all.

The fact that two men known as Ronald McFondle and The Kiwanis Adonis spoke before the Washington State congress about saving their “Theatrical Wrestling Events” from being shut down by the department of licensing was covered on the national news, but the finer details of the story would constitute a spoiler.

The filmmakers began the project as a short film after hearing about behind-the-scenes drama from a friend, who portrays Second Banana—Richards’ one-time wrestling partner and eventual replacement. The story was rich enough before lawyers, police officers and congress became involved; Harvie and Horstmann ended up following the events for over five years. Randomly happening upon the world’s dumbest civil rights battle must be a dream come true for any documentary crew.

(Full disclosure: I’ve known several of the stars of Bodyslam for years. I was a performer on an associated non-wrestling show called Get Loweded for two years, during which time I encountered Ronald McFondle regularly. The premise of the character is simple: he’s a drunken, perverted clown. What makes him remarkable is the frankly scary level of commitment Black brings to the role—he’s the Daniel Day-Lewis of fake fighting—and when I’d see Black out of character, he was so soft-spoken and kind that I had no idea how to process it.)

A lot of these guys are already larger than life when they’re away from the ring. They aren’t tech millionaires or rock stars; they’re weird wrestling nerds who created an entire scene to fit their own sensibilities. Many of them come from rough homes and knew nothing but rejection and isolation when they were growing up.

When the state eventually tries to shut the SSP down, the performers talk about it with a feeling of inevitability. Not that there was any valid reason to declare comedic wrestling shows unsafe and illegal; more like of course they were going to get stomped on again. Black’s reaction to the injunction speaks volumes: “You can make us stop, but we’re gonna cause a fucking stink on the way.”

Seattle is a city people find interesting, but it’s rarely actually seen in movies and television. Most of the time you’re actually seeing Vancouver, and when you do see footage shot in town, it’s of the Space Needle or the Market. Bodyslam features those landmarks, but also shots of maddening, traffic-choked streets, rain-melted, sagging houses, heavily tattooed loudmouths smoking on sidewalks and people living in tiny apartments busting their asses to scrape by. It’s a side of Seattle you don’t see on the Travel Channel. Let’s hope we can keep it around a little longer.