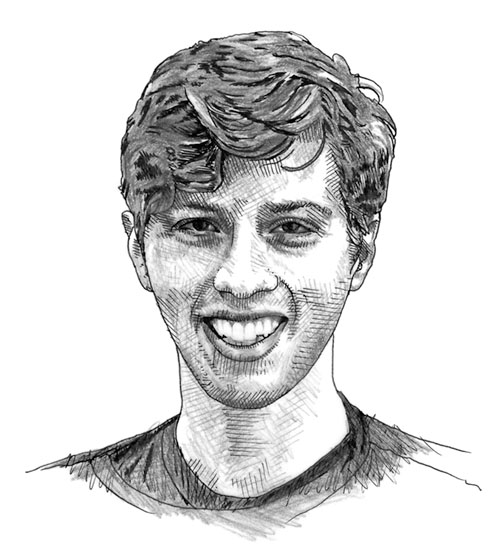 As a member of Pacific Northwest Ballet’s corps de ballet since 2009, Andrew Bartee has danced dozens of roles in the past five years, including the Nutcracker prince and an evil sprite in Cinderella. Known for his long limbs and graceful, angular movement, Bartee dances fluidly across genre. In 2010 he began performing contemporary dance in Whim W’Him’s 2011 show Monster, which featured an emotional duet with Lucien Postlewaite. At 23 years old, Bartee has recently emerged as a choreographer, too, contributing movement to Super Eagle with Kate Wallich + The YC at Velocity Dance Center in February. This month he’s unveiling a world premiere as one of three pieces in Whim W’him’s #unprotected.

What can you tell me about the piece you’re creating for #unprotected?
It’s called “I’m here but it’s not the same” and it’s based on my relationship with my mother. Our relationship has gone through different phases—that’s the bottom layer of the piece that I’m building on. It’s also about changing as a person and the inevitability of that. You can’t stop it, there’s nothing you can do, even if you’re resisting.It’s an abstract piece, serious and funny but not dark. You can tell there’s darkness underneath, but we’re laughing about it. I’m going to try to do some character work, which I’ve never done before. I’m excited to use Lara Seefeldt as the central dancer. She has the most amazing physical humor; she’s a master of body language.

Is your choreography always personal?
It’s always very personal—that’s why I make it. But it’s not always important to me that people get that part of it. I’m just starting out as a choreographer and I don’t feel like I’ve found my voice as a dance-maker yet. I’m still very much in the exploration part, trying to find out what kind of movement I need to make to express myself. I’m not as good with words or talking, so movement is how I can express my feelings. The act of being physical is something we can all relate to as humans. That’s why dance speaks to me.

Why did you choose to pursue dance as a career?
I didn’t know that dance could be a career when I was little. A family friend suggested I try it because I’d already gone through all the sports, I’d tried violin, and nothing stuck. I took my first class when I was 10 and started at the PNB school in 2004. I didn’t decide to become a professional dancer until I was 16. It wasn’t until my parents took me to see American Ballet Theatre when they were in town—I saw Giselle—that I realized that I could make a career of dance.

What’s it like balancing ballet and contemporary?
It’s not the same emotionally. In classical dance you’re given a character and you have restraints to be that character. But in contemporary, it’s freer physically, which allows you to be freer emotionally, too.

Why did you decide to explore your own choreography?
I’ve always had an inclination to move, and when I joined PNB I couldn’t stop moving. When I was in the back of the room, Francia [Russell, PNB’s co-founding artistic director] was always yelling at me, “Andrew! What are you doing back there?” In 2010 I was part of the student showcase, choreographing a piece called “Shatter” with Margaret Mullen. It was my first exposure to collaboration and I learned a lot about my strengths and weaknesses as a choreographer.

You were recently chosen as a choreographer for PBS’s The Face of America series. What’s that about?
Each year [the Wolf Trap Foundation for the Performing Arts in Washington, D.C.] chooses a different National Park and a choreographer to make a site-specific work in that park. The work is filmed on location and the film becomes part of a PBS special called The Face of America. Because Olympic National Park was selected this year, Wolf Trap contacted Peter Boal at PNB, seeking out a choreographer who was a Washington native. We shot at three locations at the end of April: Hurricane Ridge, Crescent Lake and Rialto Beach. I’m choreographing the dance and directing the film.

“I’m here but it’s not the same” premieres as part of Whim W’Him’s #unprotected running at the Erickson Theater May 15–23.