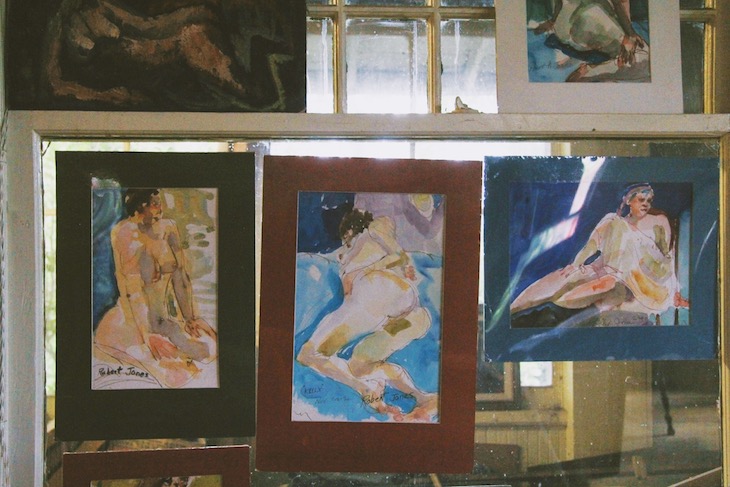 Power lines slice diagonally across the frosty white earth like a scar, stretching into darkened mountains. Behind them, an orange glow suggests another world. Ochre and gray houses, tree stubs emerge from the snow. Hurried lines suggest a painter who worked quick and loose, as if the snow might melt before he finished.

Robert Jones painted Winter Scene on a wooden toilet seat during one of his first winters on Beacon Hill in 1950. He would paint this scene, looking east from his house, many times until he died early this year at 99 years old. His dog Midas died two days later.

By art world standards, hardly any people have witnessed Winter Scene. It was never shown in a museum or gallery. Jones never had a solo show, sold very few works and wasn’t famous by any measure.

Nevertheless, he never gave up painting. He lived in a red house on Beacon Hill, built in 1906 on a secluded, wooded property, where he painted incessantly and well into his 90s: self-portraits when it rained, the backyard lilac trees when the weather allowed, a slew of local characters and models present at his biweekly painting club.

“He loved painting, and he loved people. He probably loved painting because of the people,” says Kathy Youngren, his daughter, herself an abstract painter. “The main reason he was so content alone in that big house was his art.”

A staggering number of paintings remains in Jones’ house today. The walls are crammed with paintings hung salon-style, side-by-side. Throughout the home, stacks of paintings—mostly portraits rendered in vivid, quick strokes—are piled on the ochre carpet. Canvases and piles of drawings are heaped on every surface.

“And there’s more,” says Joe Shlichta, Jones’ neighbor. “This is 60 years of painting.”

Shlichta, also a painter, is one of the driving forces behind a posthumous exhibition and sale of Jones’ work at Victrola on Beacon Avenue in November, benefitting Beacon Arts.

Maura Shapley, Jones’ cousin, estimates there are 300 oil paintings and some 700 drawings and watercolors left in the house. “The sheer volume is part of the delight,” she says. “What a wonderful way of expressing your life.”

Jones’ life was anchored in a way many of us can’t imagine. He worked for the fire department until his retirement in 1968. Except for a stint in Japan during WWII, he never ventured far from his home turf of southeast Seattle. Shortly after his return from the war, he moved to the house on Beacon Hill.

Things were different then: There were many trees and even a creek, Jones told Shlichta when they ran into each other during Jones’ daily walks with his dog, tracing the streets and their changes.

“Bob was very direct,” remembers Shlichta. “You can see that in his paintings. There’s an ease and directness to it.”

He traces the squiggly lines of a watercolor sketch of a seated woman. Later, when we ruffle a stack of drawings, we consider a thought experiment: If these hung in the Louvre, nicely framed like neighbors Degas or Gauguin, would anyone notice the difference? No, says Shlichta. So much of what makes one a successful painter is perception and reception.

The thought experiment points to the art world’s absurdity. It’s not considered an oeuvre only because no one looked.

“He never put himself out there,” says Youngren. “He was afraid of rejection. But it didn’t make him very sad. He painted for his own pleasure.”

Today, these paintings are among the morsels by which Jones’ life is traced. Youngren sees them as relics of his joy, though there are suggestions of heartbreak in them too. Portraits of his wife—the love of his life who died in her 60s—hover in the background of many self-portraits. And whoever knows of his mental health issues, can read torment in the way he painted his wary eyes.

“It was his art that kept him going,” Youngren says.