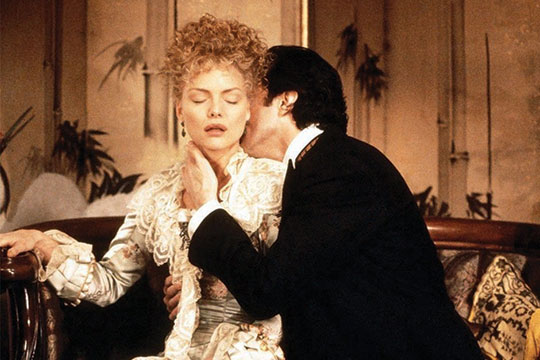 'The Age of Innocence'

Sir David Attenborough has been chronicling the awesome, terrifying beauty of nature for decades, and this latest excursion is no less haunting and gorgeous than previous ones. You could watch this for the pure visual majesty of our oceans, or you could stick around for the part where an eel and an octopus set actual traps to ambush a bunch of crabs. Animals are weird. —Matt Lynch

Based on the award-winning novel by Margaret Atwood, this TV series ponders a future reality where fertility is at an all-time low and most women are forced into a life of servitude and child-bearing for the rich upper class. In this cultish dystopia, a totalitarian government rules all. Elisabeth Moss (Mad Men) is Offred, a Handmaid whose memories of her past life with her child and husband drive her forward to rebel against the system. —Emalie Soderback

The Age of Innocence (Criterion Collection)

A Pistol for Ringo / The Return of Ringo

Most people know spaghetti westerns from Sergio Leone’s Eastwood-starring Dollars trilogy, but those films were part of a wave of low-budget Italian and European westerns from the ’60s and ’70s. These two, starring Giuliano Gemma (aka Montgomery Brown), kicked off a string of films about title character Ringo. The first is a strange synthesis of comedy and violence, as Ringo takes on a troupe of bandits. The sequel, featuring the same director and cast in different roles, is an operatic revenge fable. Both have music by the great Ennio Morricone. —Matt Lynch