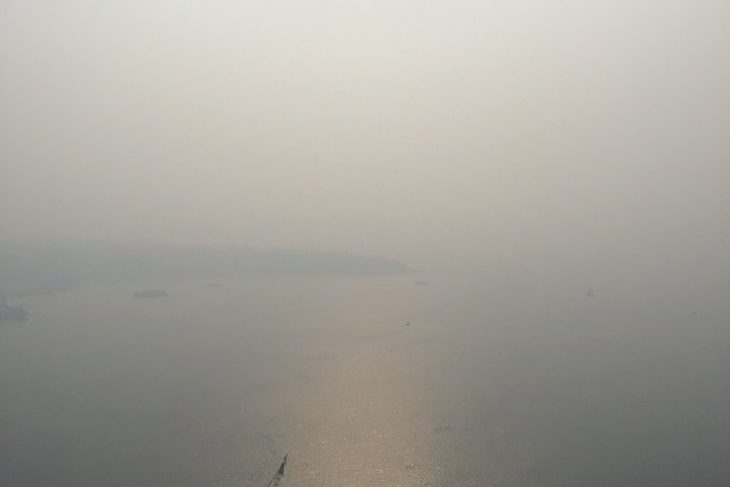 Just as the Employee Hours Tax repeal earlier this year linked Seattle politics to a national conservative counterrevolution, so too has the annual smoke tied Seattle to the global ravages of climate change. The winds that brought the foul air here from forest fires in British Columbia delivered a blow to the city’s ego, forcing residents to reconcile the fantasy that used to be with the reality that is. For weeks on end in summer and spring, Seattle’s glaring weaknesses—rampant unaffordability, a comparative lack of racial diversity and a cultural community that struggles under the weight of both—can no longer be countered by its natural splendor. For Seattle, the smoke is a crisis of identity and of health.

Lest Seattleites blame this poor air quality on fires in California and Canada, we should understand that the haze is less the dirty work of distant villains than it is a tragedy of unforced errors, the compound result of civic mistakes in transportation and housing going back a century and continuing into the present.

It’s been a high climb to the gallows, beginning with the foundational sin of ethnic and environmental rapine that started at the first point of contact between Puget Sound-area Natives and white settlers in 1851; which escalated with the prolonged decimation of the area’s evergreens for a burgeoning timber trade in the late 19th and early 20th centuries; which continued when Seattle voters rejected ballot measures for rail transit in 1911, 1968 and 1970; which was worsened when Interstate 5 opened in 1969, announcing the primacy of the automobile on an arterial path that could’ve centered biking and walking; which was locked into place when restrictive zoning ordinances in 1923, 1957 and 1982 decimated the urban density required to reduce the city’s reliance on cars and the carbon emissions that come with them.

It’s impossible to say which of these actions torpedoed our delicate ecological balance, bringing us to the casual expectation that our air will be simply unbreathable for some portion of the calendar year. But if Seattle’s capitalist industries of logging, aerospace and tech have historically produced positive economical reverberations, the city’s reluctance to shrink its Sasquatch-sized carbon footprint has an conversely negative environmental impact.

I’m a 26-year resident of the Seattle area who moved here at age 8 when my dad and I relocated from the East Coast in the spring of 1992. My dad once worked as a technical engineer for a firm that removed asbestos from aging buildings in New York City, a double-whammy of toxic exposure that made the famously clean air of the Pacific Northwest a real relief. A quarter-century later, we both suffer the crippling headaches and sinus issues that come with the smoky last weeks of Seattle summers. Since about August 2015, a dystopian scenario has corrupted the scenic backdrop that attracted us here.

Through a welcome haze of nostalgia, I fondly remember my upbringing in Shoreline in the early 1990s, days when climate change was something my elementary school teachers assured me wouldn’t impact me in my lifetime. The problem was always phrased in abstract “generational” terms too cumbersome for my adolescent brain to comprehend. Sure, overblown climate anxieties seeped into popular culture, but in my prepubescent state, the cartoonish narratives of environmental decline in Captain Planet and the Planeteers (1990–1996) and The Magic School Bus (1994–1997) sent the subliminal message that it was a problem my kids’ kids would have deal with.

A second look at the pop culture of my youth reveals something more insidious. A 1990 episode of the television series Teenage Mutant Ninja Turtles (1987–1996) titled “Shredder’s Mom” involves a plotline where the titular villain threatens to melt the world’s ice caps with a giant orbital mirror. When interviewed by reporter April O’Neil, a cartoon climate scientist says he has no idea how to stop climate change even in a decelerated state and cautions that the major issue with rising sea levels will be “a rapid decline in the value of your waterfront property.” The fierce foursome of mutated turtles—themselves the product of an environmental accident—thwart Shredder’s plan. At the episode’s end, April O’Neil declares “the temperatures are back to normal and once again our world is safe” while standing in front of a freeway crowded with cars. This market-mediated, fantastical attitude to climate change—where freakish bad guys with NASA-level technology are the ones destroying the planet, rather than workaday motorists in SUVs—is part of our problem.

In his 2009 masterpiece Capitalist Realism, cultural critic Mark Fisher wrote that “environmental catastrophe features in capitalist culture as a kind of simulacra, its real implications for capitalism too traumatic to be assimilated into the system.” Hollywood and pop culture have repeatedly transformed climate change into lucrative spectacle, with the 2017 film Blade Runner 2049 harnessing toxic smog as a canvass for brilliant cinematography. Such representations reinforce the naturalness of natural decay. Fisher goes on to write that “capitalism seamlessly occupies the horizons of the thinkable,” referring not only to metaphoric fog in which capitalism obscures our ability to imagine something better but also to the actual clouds of carbon it has placed in our airstream.

The fatalism of pop culture is mirrored in our realpolitik. When city officials refused to offer even gestural symbolic solutions (free transit on smoky days? A downtown car ban?) during the recent smokestorm, they demonstrated that much of Seattle’s political leadership has internalized Fisher’s foggy fatalism. Such measures would fall pitifully short of a genuine commitment to increasing developmental density that would get cars off roads, of penalizing major corporate polluters for their emissions or of using Seattle’s neighborhood centers as depots to deliver breathing masks to the homeless. But they’d at least signal a willingness to use the air hazard opportunistically for pro-environmental ends. As it is, in the words of New York City urban planner Janette Sadik-Khan, “traffic is viewed in the same way as weather; a passing, potentially inconvenient condition over which we have no control.”

Climate change is man-made. Rising emissions lead to rising temperatures; rising temperatures turn forests into tinder; less moisture in the air exacerbates the fires, which in turn create more emissions that add to those already in the air because of automobile dependency. Environmentalists refer to this phenomenon as “the climate loop.” It’s atmospheric science, not rocket science: Cities and the people in them can do something about it. Or they can die slowly having not.

In a BBC documentary in 1996, author Jonathan Raban declared that “Seattle is the first big city in the history of big cities where people go to that city to get closer to nature.” For decades, Seattle has polished that façade in front of its peers, positioning itself as clean where Detroit is dingy, spacious where New York is claustrophobic, breathable where Los Angeles is toxic. The smoke of forest fires has dismantled that mythology. The haze hazards the figurative and literal lapse of Seattle’s environmental exceptionalism, introducing the prospect of earthly mortality to a city that swore it was above it. This is the city we fell in love with; this isn’t the city we fell in love with.