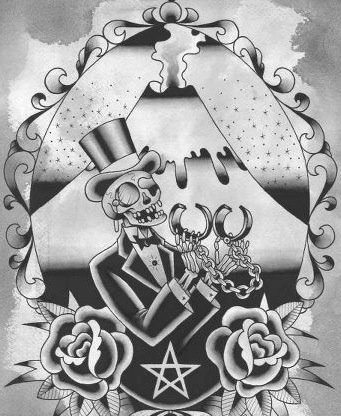 In 2009, Megan Jackson, Dayo Anderson and Emily Harvey began training with the Tectonic Theatre Project, the progressive New York City-based theater company best known for creating the award-winning experimental play, The Laramie Project. The specific focus of their study was the collaborative technique of Moment Work, a highly disciplined, cross-platform approach to original theater that requires each element of the stage to be treated with equal weight. Costuming and set design are no less important than scripting or acting in Moment work, and synthesizing those pieces through collective development without getting bogged down by the drag of disparate perspectives is fulcrum of the medium.

Galvanized by this experience, the trio dubbed themselves Blood Ensemble and began forging the idea of collaborating with their friends in Smooth Sailing, an artful, jazz-informed Seattle metal band. Blood/Sailing is what they describe as “site-specific, self-generated theater” or in more straightforward terms, “metal meets experimental theater.” The music, dance, and silent acting are oriented around Emily Harvey’s Greek-flavored script about a group of enslaved youth (“The Innocents”) toiling in the underworld at the behest of a grotesque, predatory overlord (“Mr. Clementine,” portrayed with terrifying glamour by Jordan Melin).

Blood/Sailing is a flagship production and exhibits all the vigorous ambition of a fledgling artistic endeavor—but blessedly, very little of the awkward self-consciousness that often comes with young artists finding their footing is at play here. The simply dressed stage gets most of its power from Keener’s dramatic, carefully calibrated lighting schemes and broad swaths of artfully draped red and white dressing. The members of Smooth Sailing are cloaked in Jawa/monk-like robes and somberly enter the venue, taking their place on a staggered stage built from wooden pallets. Dialog is conveyed via projections on the walls backing the stage, with lines framed in flickering, ornamental scroll reminiscent of early silent movies. Dressed in filthy, tattered rags and exuding an unsettling combination of Stockholm-eque naïveté and animalistic terror, the Innocents do battle with Mr. Clementine, while a ghostly chorus of his previous victims (“The Vengeful Slain”) provide interpretation and guidance towards their escape from the underworld.

Copious warnings about hearing protection are valid: this is not performance art for sensitive ears (earplugs are given out with programs). Smooth Sailing’s sound is brutally beautiful, all crushing low end dizzying, scale-scraping crescendos. Their affection for orchestral post-rock acts like Godspeed You! Black Emperor is evident, as is their commitment to the cross-disciplinary nature of the production. Even in the midst of furiously whirling through their material (much of which is taken from their 2011 debut, XOXO), all the players pay careful attention to timing their sonic movements with the physical ones of the actors on stage. The overarching result is a sumptuous nightmare, as informed by Elizabethan theater as it is by modern dance pioneer Isadora Duncan, but unmistakably underscored by metal’s dark, devilish tones. Perhaps most notable is the obvious potential for further refinement of this approach in future, macabre-minded productions. Naturally, Blood Ensemble’s next show will be a Halloween production of Poe: A Modern Psychological Thriller.